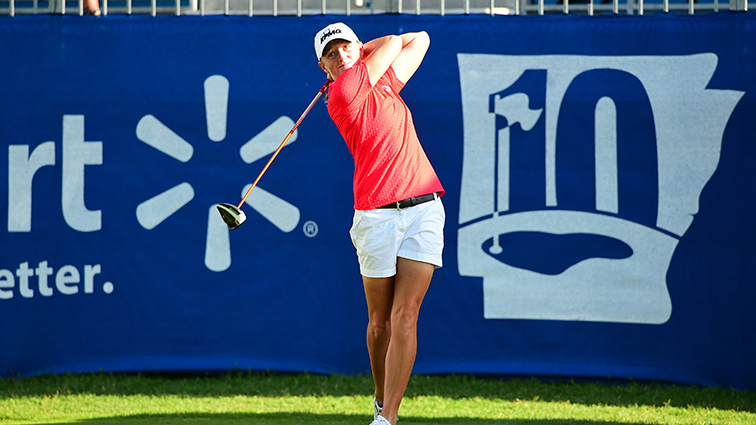 Former and current Arkansas Razorback golfers will take to the course this week, as the LPGA Walmart Northwest Arkansas Championship gets underway on Wednesday.
Former Razorback golfing great and 2014 NWA Championship winner Stacy Lewis will compete in this year’s competition. Lewis, who will compete while pregnant, told reporters earlier this week that she will also reveal the gender of her baby at the event with a coordinated fireworks display.
“Things have definitely gotten harder, I would say the last week or so and the heat of the summer and all that,” Lewis said in a press conference earlier this week. “Actually, I’m excited. I’m looking forward to the break and being able to decorate the baby’s room and do all that kind of stuff and to be a mom.”
Lewis also explained to reporters what it’s like to compete in front of the home faithful.
“The way the fans here support Razorbacks and former Razorbacks, there’s nothing else like it,” she said. “And it’s just so cool for me. It’s a homecoming and it’s a week that I can really relax and enjoy because there’s not a whole lot of work that I have to do on the golf course, I just love being here. I wish I could live here, but I just love this week of getting to come back.”
Fun fact: Lewis is also the only American-born winner in the 10-year history of the Walmart NWA Championship.
Current Razorback and rising senior star Maria Fassi is among the field of competitors this week. Fassi, the 2018 SEC Player of the Year, was recently named the winner of this year’s Annika Award, which is given to the most outstanding collegiate golfer as voted by players, coaches and golf media.
Fassi will play alongside her teammate, Dylan Kim, who is a junior at the University of Arkansas.  Former Razorback Gaby Lopez will also compete.
The event, which officially kicked off at 9 a.m., Wednesday, will also feature the No. 1 female golfer in the world, Inbee Park. Park Park, who played on the KLPGA last week, returns to the LPGA this week. Park has now been number one for five straight weeks.
For the complete schedule of this week’s LPGA events, which runs through Sunday afternoon, click here. For tickets to the event, which is being held at the Pinnacle Country Club in Rogers, click here.