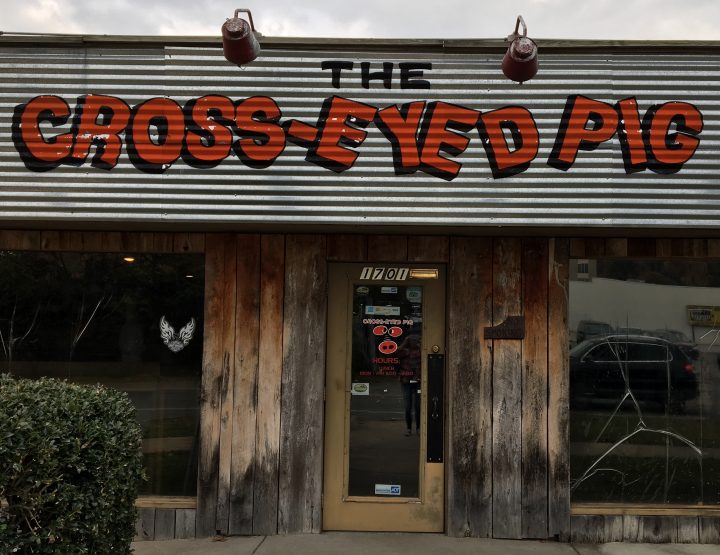 In our Lunching in Little Rock blog series, Michael Kirkpatrick will explore and review the city’s best restaurants – all in time to get back to the office. This week, Michael ate lunch at Cross-Eyed Pig at 1701 Rebsamen Rd. Click here to read more in this series.

Little Rock has to be one of the best places in the country to get barbecue. I know most people think about Kansas City sauces, Memphis ribs, or Texas brisket, but Little Rock has the best of all of them. I think we need to make a push to establish Little Rock as the undisputed, best place to eat, home of the pulled pork sandwich. Now, I can’t tell you who does it best, because I haven’t met a pulled pork sandwich I didn’t like, but I know that Cross-Eyed Pig on Rebsamen is a contender.

Cross-Eyed Pig is what you imagine when you think of classic Southern barbecue, with its wood-paneled interior, boars’ heads and hunting pictures hung on the walls, the smell of smoke and sauce, and paper towels on the table. When I walked in, about 10 people were pulling apart their ribs and passing around college football scores sheets. The papers were covered with saucy fingerprints and the group was having a great time. The waitress brought me my Coke, which was an ice-cold can straight from the fridge, and poured it into a cold Styrofoam cup with the good ice.

Today, I came for the pulled pork sandwich (which is good because they were out of the ribs). The sandwich comes topped with slaw and accompanied by several sauce options. I like the molasses flavor of the mild and the spice of the hot, so I combine an unhealthy portion of both. It’s messy, but I am fully committed and eat it with savage style: both hands, no cutlery. The hearty bun holds up well and I escape without any shirt stains. The pies and cobblers are amazing, but the sandwich and sides were just the right amount for me today and, sadly, I passed on dessert.

You heard it here first: Little Rock is the new capital of the pulled pork sandwich. Get out there and do some sampling for yourself. Let me know your favorite. I suggest starting at Cross-Eyed Pig, where the pulled pork is “so good it’ll leave you cross-eyed!”