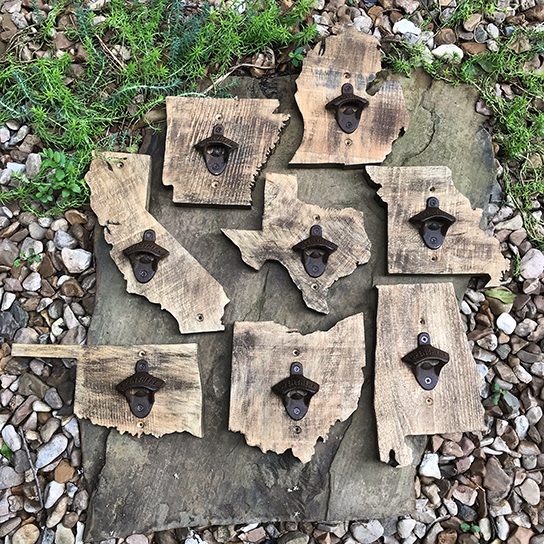 Lurking inside Justin Smith’s shop is a growing group of Sasquatch. One day when he least expected it, the elusive species wandered into Smith’s life and they have yet to make their departure. Through a series of successful events, the Sasquatch family and Smith have become friends.

It all started back in the summer of 2018 when Justin Smith, chief business and community outreach officer at Arkansas Tech University-Ozark, was at a friend’s house and noticed a mounted bottle opener. “I had been wanting to find something to do on the side that involved woodworking because I was interested in learning more about it. I had seen wall-mounted bottle openers before and always thought they were neat. When I saw one on my friend’s back patio I thought, ‘You know what, I think I can make those,’” Smith says. 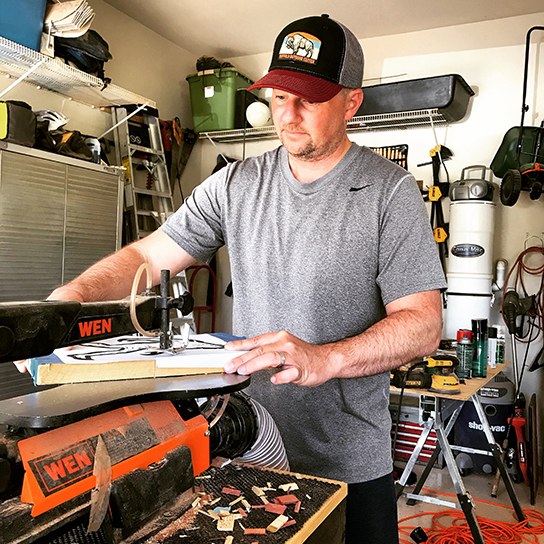 He describes himself as a handy person who likes to fix things, and he’s always looking for something new to learn. “I’d never done woodworking before, but I like the learning process of teaching myself things. There’s a lot of pride that comes from learning how to do something that you’ve never done before,” he says.

Even though Smith has a degree in business, he was new to the world of starting a small business. “I’m not a marketing expert at all, but I learned along the way and picked up things such as the cycles of when customers buy things,” Smith says. He researched platforms to sell products and found that Etsy was a great platform for beginners. The site provides helpful tips for people just starting out and Smith claims it’s simple to use. 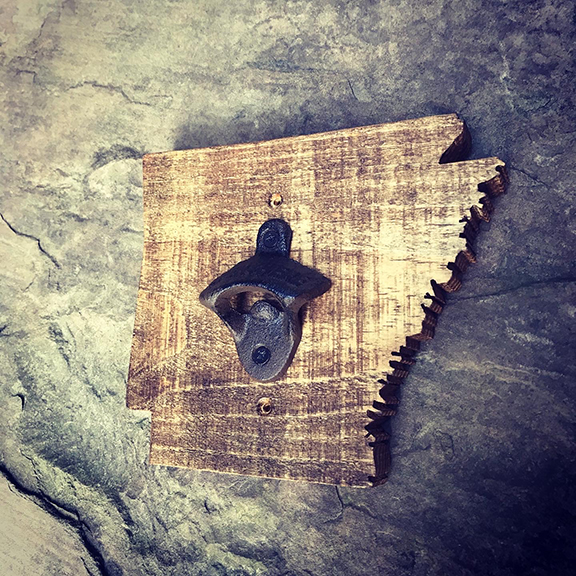 To kick-off his new venture, Smith turned to the U.S. map. “People are always proud of where they live. The geography and shape of states is everywhere on stickers, t-shirts and hats, so I thought they would do well as bottle openers,” Smith says. The shape of Arkansas is a really cool shape with the river on the east side, and you could do a lot of things with it. No offense to Kansas or more rectangular shaped states, but our state looks really neat.” He believed that people would be big fans of state-shaped mounted bottle openers, and he was definitely on to something.

“I made a couple of Arkansas into bottle openers and they turned out pretty good. Although, when I look back, they weren’t as good as they are now, I was using the wrong equipment,” he says with a laugh.  “I try to pick up things where I go whether it’s, you know, how to ship your product a little bit cheaper, what kind of wax to use on the wood to make it look more rustic or what types of wood to use.” Over time, Smith learned from other craftsmen, did more research and trial and error to produce the quality pieces he makes now. 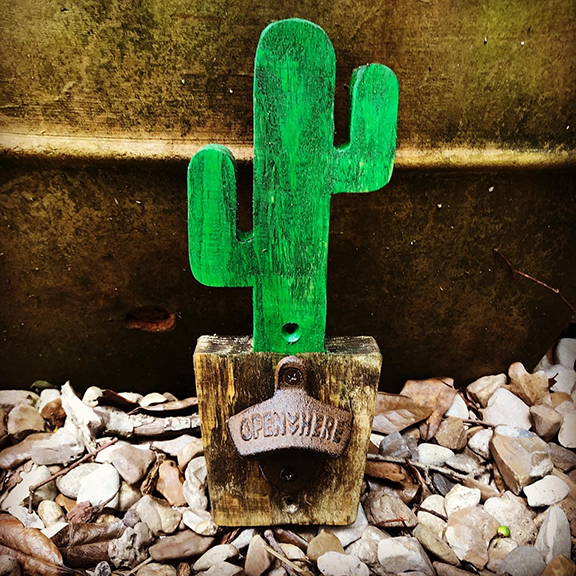 “I pride myself on attention to detail on each product, I use what’s called a scroll saw to do most of my work. It’s kind of like a sewing machine for cutting wood. You can do some very intricate work with it,” Smith says. He shares that many people ask if he uses an automated machine to make the fine cuts in the wood and that they are impressed with the amount of work he is able to do with a scroll saw. “I feel like that’s what makes some of my items stand out is really focusing on the detail. It takes a little bit more time, but it’s worth it.”

Wanting to expand his product designs, Smith started looking for creative shapes that customers would be interested in – this is the moment that Sasquatch strolls into Smith’s life and makes himself at home “I thought, “What shape is popular that people kind of fall in love with?” and my mind went to Sasquatch. Everyone loves Bigfoot or Sasquatch or whatever you want to call it,” he laughs. He cut out the shape and his words, “threw a bottle opener on it.” The Sasquatch design is his biggest-selling item and a favorite on his online store. “I did it for a month or so and no one bought it. Then, kind of out of nowhere, it just really took off and started selling. I would say like half my sales are of the Sasquatch,” he laughs. From all over the country, people buy Smith’s creations, so the Arkansas Sasquatch can be found in homes all over the country. 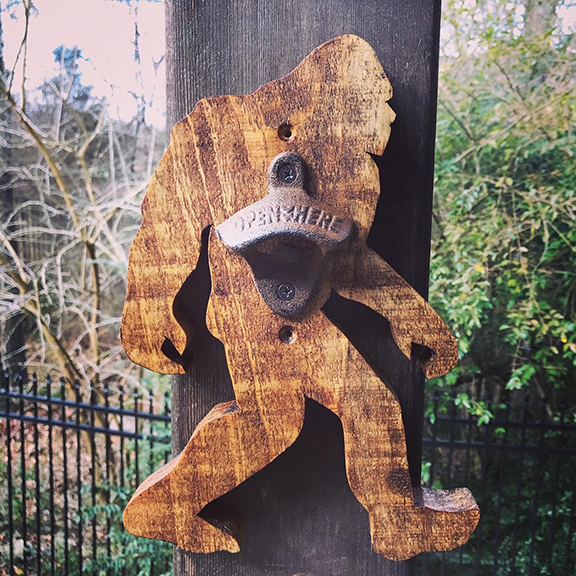 From creating to selling, Smith finds satisfaction in all areas. He explains how he especially enjoys when someone gifts another person one of his pieces. “Whether it’s for a birthday or an engagement, 20 percent of my online orders are gifts someone is buying for someone else and I get to read the gift messages they send with the package. It makes you feel good that someone bought your product to send to a friend of theirs,” Smith says. Also offered on his online Etsy store is the option for custom orders. Like he said in the beginning, he enjoys learning new things and finding what works. “People will reach out and say, “Hey, can you do this?” I always say yes and figure out a way to do it. I love hearing the stories behind some of the custom orders,” he laughs.

Smith enjoys creating artistic pieces that also have practical uses. He’s been trying his hand at other styles and projects, and he encourages anyone else that may have a twinge for finding a new passion to go for it. He believes that turning a hobby into a business may sound daunting to some, but it’s worth it in the end. “There’s lots of platforms out there right now, especially online, that make it easy on people. You don’t have to have a lot of advanced technological skills to do something, and you can always do something on the side and keep your day job. You learn from mistakes and failures and how to make your product better and more upscale. Within only a few months of making mistakes here and there, you learn what works for you,” Smith says. 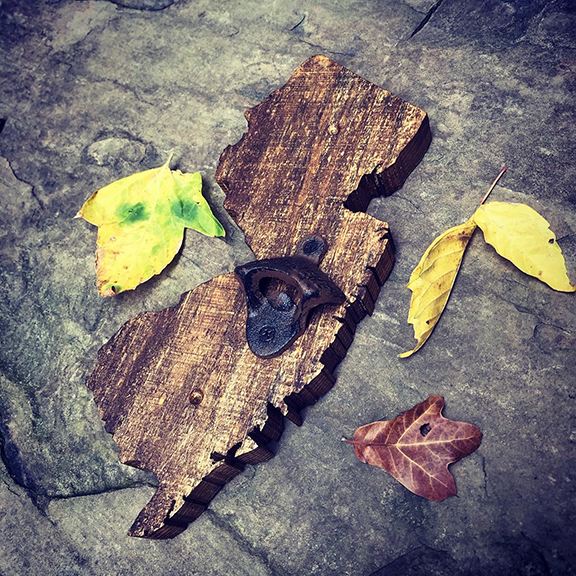 His work can be found on his Etsy store as well as Bentonville Mercantile and Happy State both located in Bentonville, Arkansas along with The Goods Homeware in Fort Smith, Arkansas. Sasquatch is always on the move and looking for a new home.