Made in Arkansas: A Bridge in Cultures with Kato Art 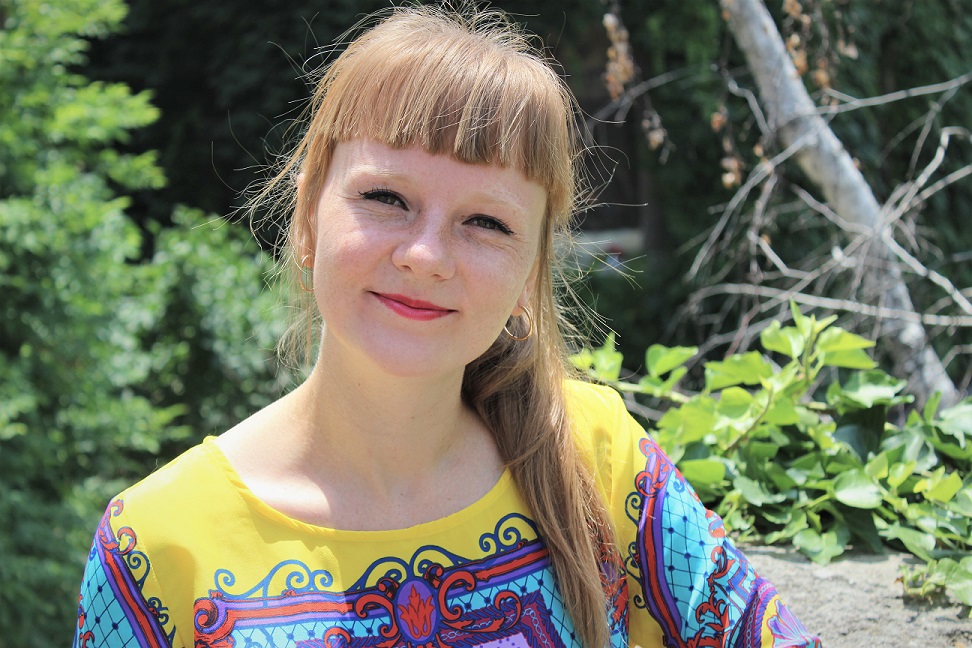 The beauty of art is not only found in the technique of the artist’s hand or the image itself — the beauty of art is in the feelings that stir in the viewer when they see a certain piece that causes them to recall either a memory, a dream or a sensation they can connect to. Oil painter Ekaterina Kouznetsova has witnessed this reaction between her art and strangers too many times to count. Although she has only lived in Arkansas for a couple of years, she has already stolen the hearts of the Arkansans lucky enough to have seen her work.

Born in the Siberian mountains of Kazakhstan, Kouznetsova and her family moved from one side of the globe to the other. The artistic family traveled from Kazakhstan to Moscow, Moscow to Argentina, and finally Argentina to Arkansas. “I lived in Argentina for 20 years, and after a while I got restless and decided it was time for a change,” Kouznetsova says. Her husband and number one supporter, Kevin Bathke, had family living in Little Rock, so the two decided to give the small, unknown state of Arkansas a chance. Bathke’s job with SunPro Solar Energy allows him, and occasionally Kouznetsova, to travel around the state and become more familiar with their new home. However, Arkansas isn’t the only place on their radar in the U.S. as the two have recently started jumping between the Natural State and the Sunshine State of Florida — something we’ll have to forgive them for. “We love to travel and experience new things, and thankfully Kevin’s job allows him to work from both places,” Kouznetsova shares. The couple journeyed to Miami in April 2021 to get to know the art scene in that area of the country. “She has her studio here and there, and I’m able to work at both locations. Our idea is to explore and expand her presence in the art world,” Bathke says. 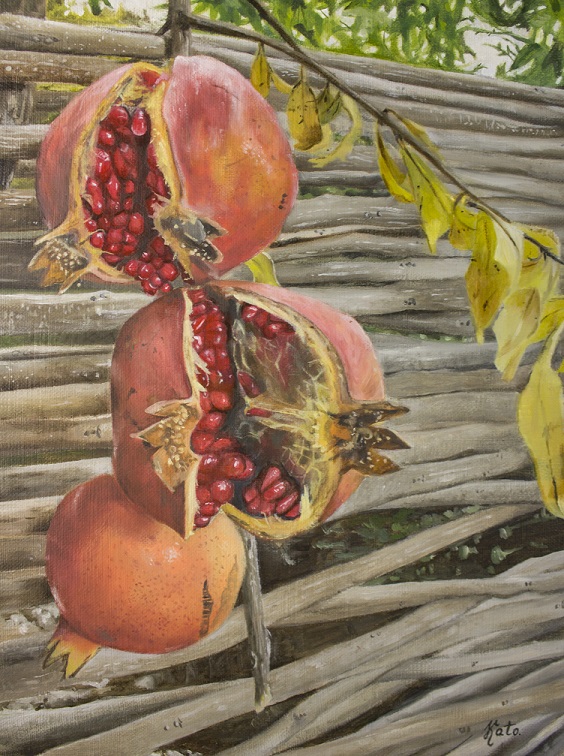 Before Kouznetsova realized how deep her love for oil painting truly went, she earned a degree in Linguistics and Translation. “I always had a passion to draw and paint, but I never thought that I could ever make art a career. I didn’t think it was possible,” she explains. Right before the pandemic began, she made that jump to being an artist full-time, and as hard work and determination would have it, things are looking bright. “I’ve made connections with different art studios here like the Red Door Gallery in North Little Rock and my pieces will be at the Arts Center of the Grand Prairie in Stuttgart for the next month,” Kouznetsova says. On the other side of the country, she’s found similar success in making connections and establishing her name as an artist in Southern Florida. 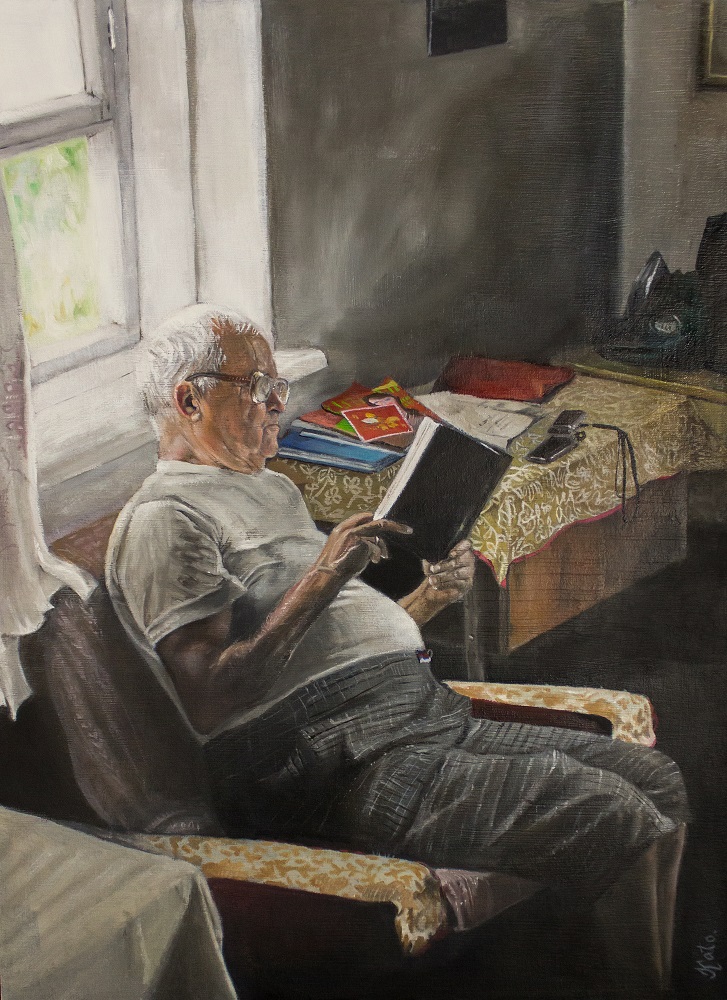 If you ask Kouznetsova what her preferred style is, she’ll give a definite answer. “I love oil painting. I love the texture of the oil and learning more about how to use it every time I paint. I really like the technical side of painting,” she shares. Her reading list isn’t exactly made up of Romance novels or Thrillers, but books by or about classic artists. “I’m always trying to learn more about art and how to make my art better. I’ll never stop learning,” she says. She’s currently reading the method of Salvador Dali, and as she shares some of what she’s read, it’s a wonder that she hasn’t been a professional artist her entire life.

In her short time in this career, Kouznetsova has won various awards and has been featured in shows in and outside of the state. From studios in Arkansas to Maryland, the intricate art leaves an impact. Looking at her pieces, there really isn’t a question as to how she’s been so successful this past year. She shares parts of her soul in every piece she creates, and the personal touches can be translated through every culture. “I don’t like to do trendy art, I like traditional art. My art is focused on everyday life scenes, objects and memories from my childhood. I paint what I like, but I also know that other people will connect with what I paint,” she says. Looking at a few of her pieces, you may think that they were scenes from life here in Arkansas, but they’re actually memories of Kouznetsova from her childhood. “One time, a lady saw a painting of Katie’s and said, “This reminds me of the Ozarks,” and it was actually from Kazakhstan,” Bathke says. “It’s really something special that even thousands of miles away, people and cultures can connect.” Green hills, beautiful wildlife and in this particular portrait, an elderly woman, can resonate with almost everyone. 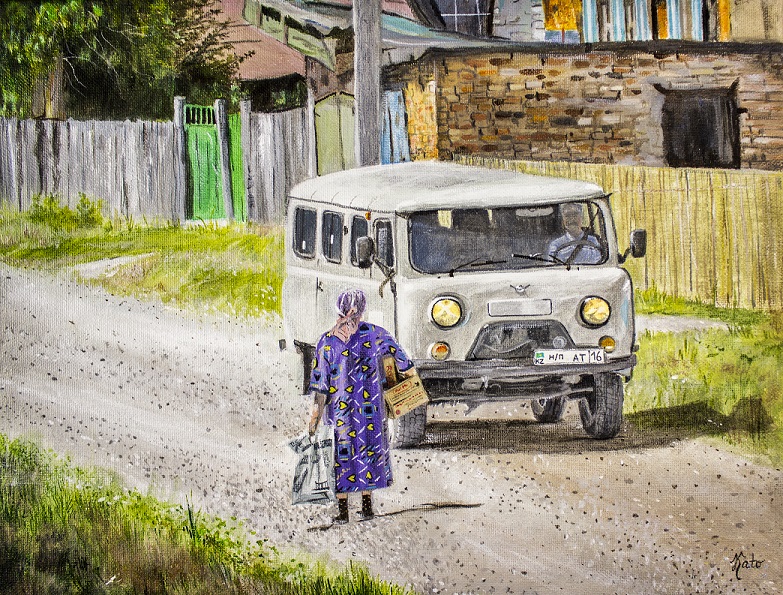 Kouznetsova uses seemingly mundane objects to spark that feeling of familiarity. A clothesline is a common detail in her paintings, and while she laughs at herself for her love of clotheslines, her use of them is highly effective. “I like to put items on the clothesline that show life in the painting. Toys, clothes and anything that stands out and creates a story and people can relate,” she says. Whether you have seen that particular scene before or just feel a sense of nostalgia for similar memories, the translation of art is powerful. 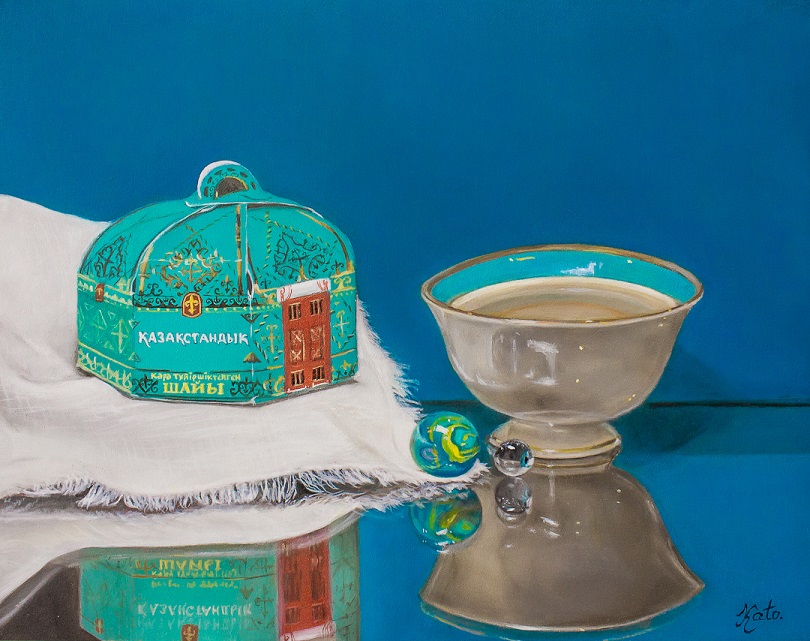 Colors of Kazakhstan by Kato

Bathke adds that there are some features that do set the two cultures apart, one being the history of Kazakhstan. “Kazakhstan was part of the Soviet Union, and by the time she was born it was the end of the Soviet Union. Even though it was over, there were still things leftover from that period of time,” he explains. Vehicle types, architecture and similar influences can pinpoint that the Soviet Union was once there, and they are present not only in Kouznetsova’s memories, but also in her paintings. “I always try to incorporate little elements of my culture into my paintings,” she says. These are the parts of her soul she paints. The color of Kazakhstan, Cobalt Teal, often finds its way into her work. A teacup, a building and even when designing her business card, she remembers the color of Kazakhstan. 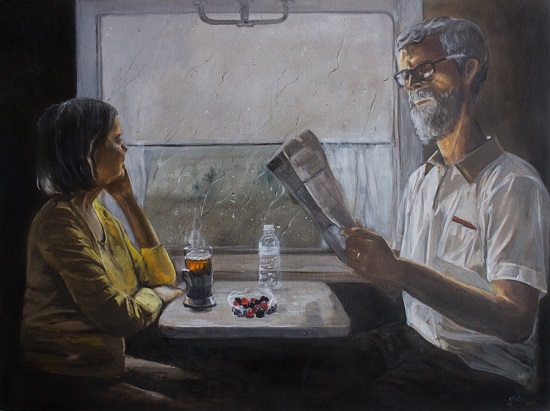 Her painting Train Heading West shows two people sitting across from one another on a train. At first glance, it’s a technically beautiful portrait with real-life elements such as steam, reflections and shadows, but a more in-depth look into the painting and there are a few surprises. “The cup on the table with the metal handle and glass sitting inside is actually a traditional Russian tea glass, and the bag of candies are raspberry candies we would have when I was a child,” she shares. The people in the painting are also near and dear to Kouznetsova as they are her mother and husband posing for the portrait. “This old man over here is actually me,” Bathke laughs and Kouznetsova joins in. “Her mother and I just sat there in a pose and she painted the scene around us.”

Kouznetsova’s mother is a musician, and her sister was also an artist. “She was always drawing and doing something – she was better than me!” Kouznetsova laughs. Her sister passed away some time ago, but Kouznetsova lets her memory live on in her art. “Her nickname for me was “Kato,” so I’ve turned that into my artist name. Whenever I sign a piece, it’s like she’s there with me,” she shares. The beloved name “Kato” can be found on paintings all over the world as one was sold to a man in Wales. “2020 was a hard year for everyone, but I was fortunate to have sold quite a few paintings during that time. I never thought that I could make this a career, but I’m so pleased. I smile when I paint because I’m happy to be doing it,” she turns to look at her husband and says while laughing, “I actually smile!” 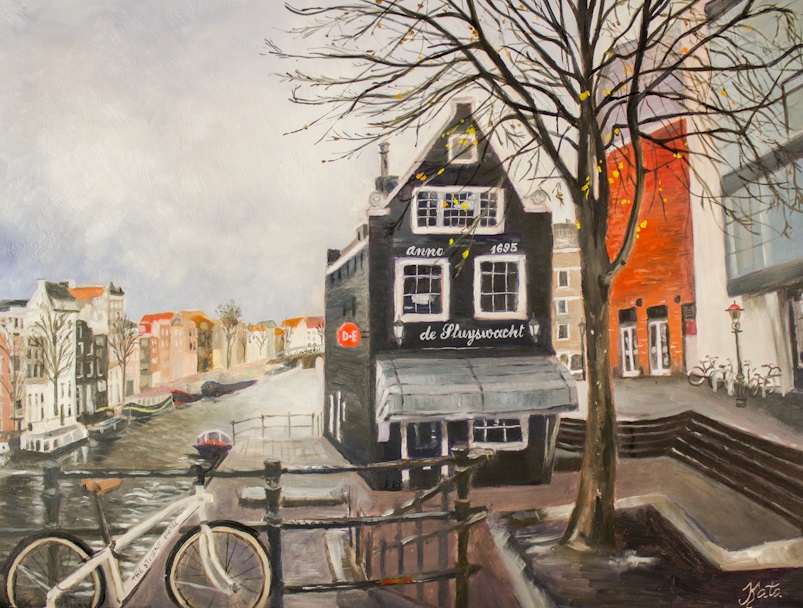 Coffee in Amsterdam by Kato

Kouznetsova, with the support of Bathke, is looking toward the future of her career. With a new series on the way and plans in the mix for the next year, she is ready to work. “I’m so excited for my upcoming series – it will be a collection of statues from my travels,” she says. Her show with the Arts Center of the Grand Prairie continues for the next month, and she already has another show lined up with Gallery 26 for May 2022. “I just can’t wait to continue sharing my art and connecting with others.”

Her art can be purchased at the Red Door Gallery, and more examples of her talent can be found here.