Made in Arkansas: Bang Up Betty Hammers Out One-of-a-Kind Jewelry 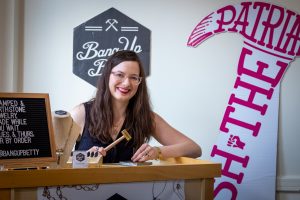 For this week’s Made in Arkansas, AY About You spoke to Stacey Bowers, who’s been handcrafting jewelry as Bang Up Betty since 2013.

“It began when I was making funny bracelets for my friends,” Bowers says, “and I learned to stamp myself, just using some rudimentary tools.”

She first learned how to make jewelry at her first job with the Argenta Bead Company, so it was just a matter of time until she upgraded her equipment and expanded her selection of pieces. Beginning with bracelets, she gradually added necklaces and earrings. Her stamped pieces feature phrases that are either Bowers’ invention, such as the “Strong as hell” necklace or the timely “Socially distant” heart necklace, or a customized phrase for the buyer. The name, Bang Up Betty, honors Bowers’ beloved cat Betty. 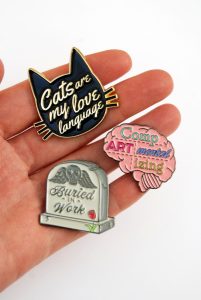 Bowers also recently began hand-casting bronze, a labor-intensive process that requires her to create a mold, cast it, and then fire it in a kiln. She also draws illustrations that are sold as stickers, such as the “smash the patriarchy” sticker that’s styled as a hammer as an homage to her crafting process.

Bang Up Betty has been included on listicles on Buzzfeed, Huffington Post, and Jezebel. Last year Bang Up Betty was also featured in 100 Side Hustles, Chris Guilleabeau’s 300-page book featuring people who turned their hobbies into successful businesses.

Amid the national recognition, Bang Up Betty remains based in Central Arkansas. Bowers does most of her crafting in her North Little Rock home studio and also works out of Stifft Station Gifts in Little Rock, where she does on-site custom orders. 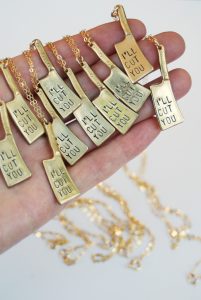 Bang Up Betty’s partnership with Stifft Station Gifts began as a friendship between Bowers and Cindi Booth, who owns the shop. Booth is also a jewelry designer and artisan, and together they have filled the shop with more than 500 pieces of jewelry.

Prior to the pandemic, Bowers also led crafting classes at Stifft Station Gifts. Last year she taught a Halloween-themed class on how to make beaded spiders. Since the pandemic, she has taught a few virtual classes while continuing to fulfill online orders. Stifft Station Gifts is currently accepting online orders from their website, and private shopping appointments are also available in advance. Bowers says they’re trying to be as safe as possible, while making their products available for customers.

Bang Up Betty’s jewelry expresses the personality of whoever wants to engrave a message, but Bowers’ voice often comes through as well. On products like the “vote so hard” enamel pin or the “I believe in science” stickers, Bang Up Betty says it’s important to her to continue to fight for what’s right in her community. 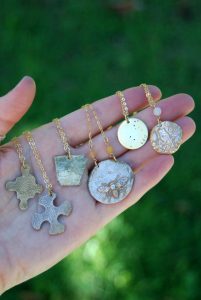 “The jewelry is an extension of myself, and I put myself in all of my work,” Bowers said. “I stamp all my jewelry, and it’s my voice.”