Made in Arkansas: Custom Nutcrackers with SilverWulf Designs 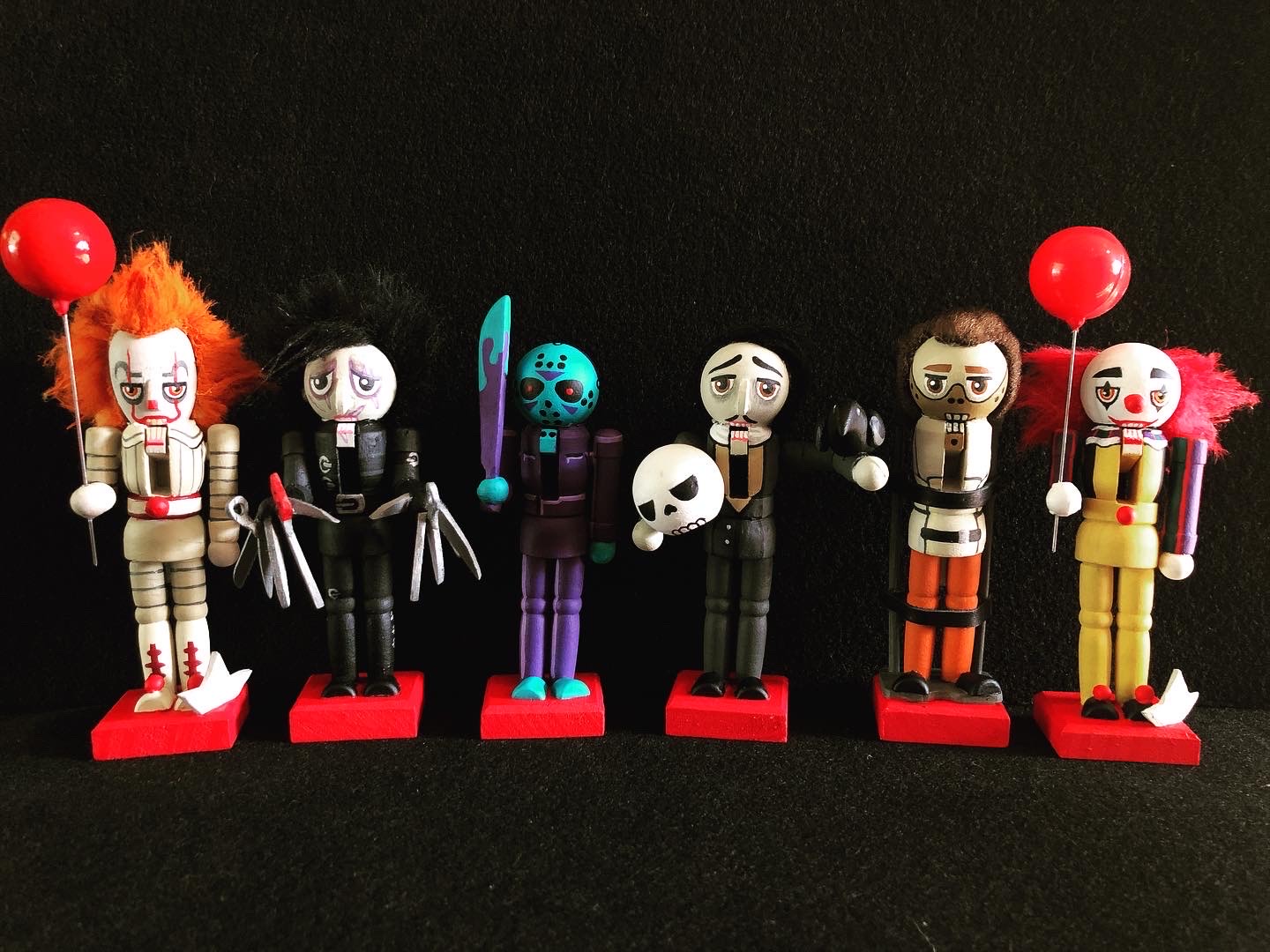 Made in Arkansas: Custom Nutcrackers with SilverWulf Designs

The Christmas season tends to receive all the glamour, traditions and hype, leaving the other three-fourths of the year unappreciated. The decorations and colors of the holiday always ignite a spark in adults and children alike, but what if those same decorations could be transformed into versatile items of year-long home decor. Or maybe even transformed into decorations for another favorite holiday that’s polar opposite to Christmas cheer: Halloween.

Nutcrackers are a signature piece of the Christmas season as decoration and the subject of classic holiday movies. Scotty Wolfenbarger, artist of anything and everything, sculpts, paints and dresses nutcrackers not in the traditional solider-style, but of horror icons, celebrities and pop-culture figures.

Raelene Tash, Wolfenbarger’s partner both in life and business, is the person to thank for pushing him to sell his unique pieces.

“I just have this habit of starting really silly projects, and I’m a big horror fan,” Wolfenbarger says. “So, one day I just decided to make Christmas decorations and made some horror character nutcrackers. [Tash] saw the pieces and told me to share them, but I was really reluctant. She just kind of started that Etsy page more for my paintings and paper art and then she added in those nutcrackers. Things just took off from there.”

“Someone bought [the nutcrackers] almost immediately, and then we got messages asking if we could make more. I put him to work,” Tash says with a laugh. “He’s always making something, and he really does everything. He makes costumes every year that are very elaborate and light up, and he’s always trying something new.”

Both Tash and Wolfenbarger worked in the service industry prior to the pandemic, but just like so many other people they found themselves at home without a reliable source of income. There’s no denying that COVID-19 brought terrible times and uncertainty, but it also pushed many individuals to take risks that paid off in the end. 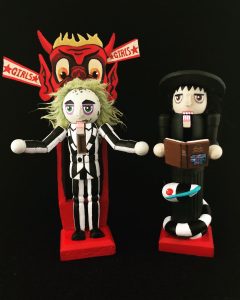 “I know it sounds crazy, but the pandemic allowed me to really dive into [art] and commit to being able to make multiple projects at a time,” Wolfenbarger explains. “Probably a month into quarantine, [Tash] told me that I was making at least as much as I was at my old job so I didn’t have to go back, and then a month after that she ran the numbers again and told me I definitely wasn’t going back.”

Tash says, “We’re still pretty new to this if I’m being honest. I was trying to figure out a way where we could bring in income and then also be able to stay home with [Wolfenbarger’s] son while he did virtual school. I had never done anything like this, and I’m actually not good with technology. I definitely had to learn a lot, but because of the time-off during the pandemic, I could learn about business and advertising. We just put stuff out there as much as we possibly could all over Facebook, all over Instagram. We actually even had a nutcracker that was on top of the trending page.”

One of the first nutcrackers to take off and help Wolfenbarger and Tash’s business, SilverWulf Designs, take off was none other than the notorious Tiger King.

“Everybody was talking about Tiger King and so [Wolfenbarger] was like, ‘What if I made a Joe Exotic?’ And I told him to go for it. Within a month, we had around 50 orders for [Joe Exotic], like people were obsessed with him,” Tash says. “[Wolfenbarger] did two different versions: He did one with a blue and silver sparkly shirt with an orange tiger, and then he did one with a pink sparkly shirt with a white tiger. People just loved it.”

Starting completely from scratch, Wolfenbarger sees each nutcracker through from beginning to end before Tash applies the finishing touches and ships them off to their new home.

“We get the raw wood in bulk orders from a company in China, and from there, t’s just the bare bones of it, you know,” Wolfenbarger says. “I chop them up and cut up other wood to make props. Depending on which one, they might require a little extra time for painting, prop-making and details, but I just do my part, and then she does the finishing work of cutting the hair and stamping the bottoms.”

The stamping that Wolfenbarger is referring to is the SilverWulf Designs signature. Along the way, customers and other business owners gave the couple some pointers on how to establish themselves as a brand and guarantee that their work can stand out.

“Again, I didn’t know what I was doing. People along the way started giving us all these tiny little suggestions on how to improve, and it was awesome. Everybody was super helpful,” Tash explains. “It’s still a learning experience for us, and we just recently actually started going through and kind of re-upping the store.” 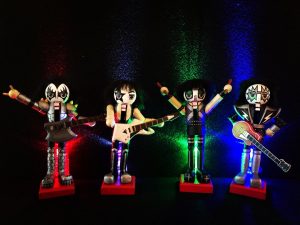 The schedule for SilverWulf Designs might change from order to order, but for the most part — as either of the duo will tell you — customers keep them busy in a good way.

“It’s silly busy,” Wolfenbarger says with a laughe. “[Tash] goes to the books and has me build a shopping list and then we separate projects into days. I’ll build 30 or 40 at a time and then just start painting in the order of requests. There is a bunch of nutcrackers in the shop and all of them are made to order. So, when somebody orders, they know that depending on the number of orders, they’re going to be waiting a little bit — which is amazing because they’re so patient with us.”

“I speak with the customers to make sure they’re happy and it’s always wonderful when we have return clients,” Tash says. “People always comment that as soon as they get the nutcracker the details are even better than the picture, which is, of course, our goal. I try and get the best pictures of the pieces so people can see the work that he actually puts into them. He has this amazing ability to be able to see something and bring it to life. It’s amazing, I’m jealous of it.”

Wolfenbarger brags on Tash’s blooming photography skills since their business started. For someone who took a dive into new territory, Tash has found her own skill-set. 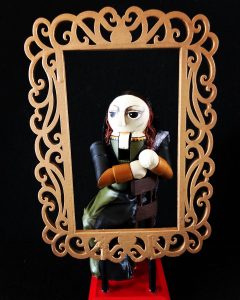 “The things she does to take photos are amazing,” Wolfenbarger says fondly. “She’ll set up an entire photoshoot for a nutcracker with props and lighting.”

The power duo enjoys traveling around to different conventions, mainly horror, and since his nutcrackers have taken off, Wolfenbarger has started making nutcrackers in the likeness of the actors and celebrities he meets in person.

“We just got back from the Texas Frightmare in Dallas and we gave Danny Trejo a nutcracker of Machete, and then we gave Dee Wallace one for her role in Cujo. He put the dog on there and everything,” Tash says. “We had so much fun and everybody loved it. The horror community really is amazing.”

Wolfenbarger might be a horror fan, but he will make custom nutcrackers for just about any request a customer sends in. Simply enjoying the process, he’s an artist in nature and just wants to continue creating.

“There have been some truly meaningful and special nutcrackers that customers have requested along the way,” Wolfenbarger says. “There was this woman in Australia whose husband was fighting wildfires, so we did one of him in his uniform. There was also a woman whose mother had passed away and she collected nutcrackers. The daughter had inherited all of them and her husband got a hold of us and wanted us to do a nutcracker of her mother.”

As for Wolfenbarger and Tash, after having seen multitudes of nutcracker characters, they each have picked up on which ones are fan favorites and which are their personal favorites.

“Mine would definitely be the Post Malone nutcracker. I mean, who doesn’t love Posty, right?” Tash says with a laugh. “But the way [Wolfenbarger] does it with Post in his yellow suit with the braids and his goatee and the cigarette — it’s amazing. I love the way he did it.” 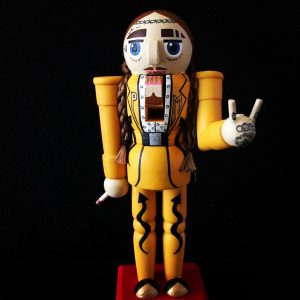 Wolfenbarger shares his favorite: “When we were at Texas Frightmare, one of the nutcrackers I handed out was to Tom Savini. He’s a special effects artist, director, actor and I’ve always been super inspired by his work, even as a kid. Before I knew his name, you know, I was drawing the stuff that I was seeing him doing in movies. It’s not a spectacular nutcracker, but I felt a connection to it.”

The duo doesn’t plan on stopping any time soon — and looking at their number of sales, it doesn’t seem as though their customers are going to let them.

“We’re just so grateful for everyone continuing to buy our stuff, especially throughout the pandemic,” Tash says. “This has been an amazing experience for the both of us.” 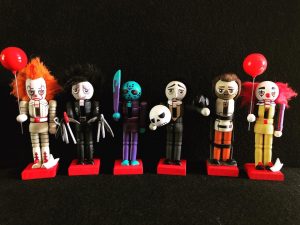 Find SilverWulf Designs here and reach out to Scotty Wolfenbarger and Raelene Tash for your own specialty nutcracker(s).