Made in Arkansas: Fischer’s Honey Company Has Been A Sweet Neighborhood Treat for Decades

AY About You is starting a new series that we’ll feature every Friday, called “Made in Arkansas” to highlight an Arkansas-based product, company or manufacturer.

Ann Fallon, granddaughter of founder Raymond Fischer, gave us a tour of the manufacturing plant, and told us about the plant’s history.

“When my grandfather Ray was a youth, he had what today they call rheumatoid arthritis, and he was on crutches when he was thirteen. His parents took him to a German doctor, desperate to find a cure,” Fallon says. “The doctor told them ‘Go get that boy a hive of bees and don’t give him any protection, and he’ll be just fine’.” 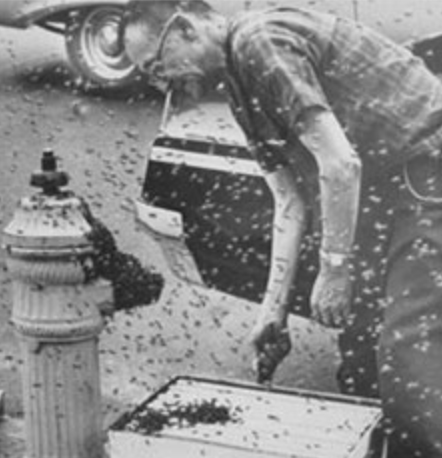 Founder Raymond Fischer working with a swarm of bees

Ray Fischer threw away his crutches when he was 28. While the role that the honeybees played in Fischer’s healing is mysterious, the impact that those honeybees were destined to have on the rest of Fischer’s life were concrete.

Fischer raised the bees in the kitchen, then in his basement, until his wife, Lena Fischer, told him to take the bees out of the house.

Ray compromised and moved to the garage.

While Fischer was a beekeeper at home, he worked as a butcher.

“There was a grocery store on 18th and Main called Watson’s Grocery. Although he was the meat cutter, he also bottled his honey and would put it up on the counter,” Fallon explained.

One day, a gentleman came in and asked Fischer if he would like a real customer. When Fischer seemed confused, the gentleman replied that Fischer needed a label for his honey.

Fischer went home and talked with his wife, who encouraged him to keep going with his passion. Not long after, Fischer Honey Company had signed a contract with Kroger.

“We sold Fischer Honey four years ago to a beekeeper that my grandfather worked with in the bee fields out of Texas,” Fallon explains. “They’ve let us stay here in Arkansas and we’ve grown. They’re really good about being considerate of us and what we need and helping us grow.”

When first stepping into the plant floors, I am greeted by two sensations– a sauna-like wave of heat, and the sweet, sticky smell of honey. 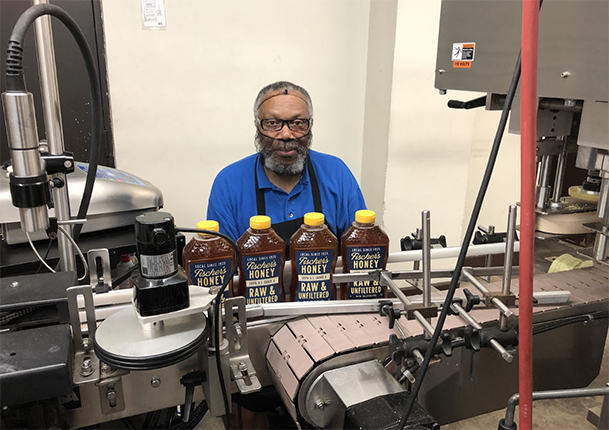 “Our floors are heated because anything below 68 degrees starts to granulate, so the floors are heated and we also have hot rooms. We get it in drums and truckloads, with 65 to 68 drums in a truckload. When we get it in it’s solid granulation– that means that it’s all hard,” Fallon explains.  “So we have to heat it up so that we can work it.”

We go upstairs, and Fallon explains the process further.

“After it is extracted, all of the honey’s impurities rise to the top– all of the beeswax, any bee wings, and we clean it off from there,” Fallon notes as the sugary smell wafts over us. “People always want raw honey and I tell them ‘You don’t want the real raw, you want us to at least take part of this off,’“ she explains while laughing.

Fallon points to a large rumbling machine. “The evaporator takes out the moisture, because anything over 18.5 percent moisture will start fermenting. This is where it really smells like honey. After you’ve been working it for a while, you can tell what kind of honey they’re working based on the smell, whether it’s clover, or soybean, which is Arkansas honey.”

Fischer’s Honey Company makes sure that they recycle as much as possible. The wax that is taken off the top is sent back to the company in Texas, and they rework that wax and make the foundations for the hives for the beekeepers.

Fallon outlines the different types of honey that Fischer’s bottles.

“One of them is a really light honey, and the other is really dark. The dark honey is Arkansas honey, or Southern honey, and the lighter honey is from the Dakotas, because they have the big clover fields that the bees work.” 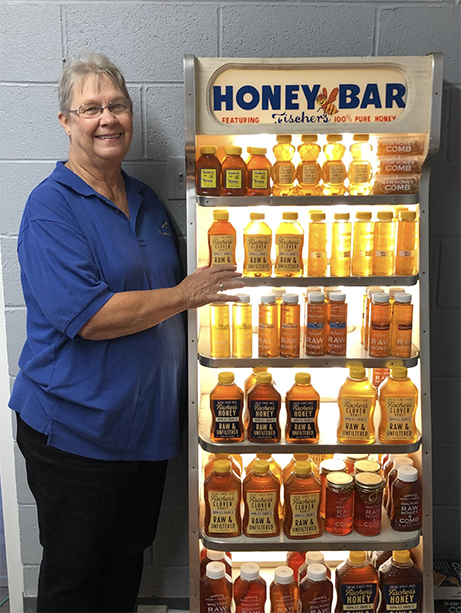 Additionally, when Fischer’s sold their company four years ago, they created another line of honey called Jamie’s Hive to Table. This honey is made in Texas, and includes a chunk of honeycomb, since the Texas producers have access to the hives. Fischer’s also makes a line of infused honey for foods and drinks– honey infused with vanilla, cinnamon and lemon. These infused blends, made at the plant, are popular on toast, cinnamon rolls, for soothing a sore throat when mixed with tea, and drizzled on ham.

Fallon says that while they’ve moved to an online platform, people will still knock on the door and ask to buy honey straight from the plant.

“We were made by Arkansas people– a fantastic group of people. We’ve still got customers that will come to the door and knock and still want to come in and get their honey from here– they don’t want to go to the grocery stores,” Fallon elaborates.

Fischer’s also sells beeswax candles at Christmas time in their plant. They usually have a gift shop set up inside their plant’s front office, but that is currently suspended due to the COVID-19 pandemic.

Fortunately, business and honey demand has skyrocketed since the pandemic began, ensuring that Fischer’s is a neighborhood classic that is here to stay.

If you’re craving a sweet treat compatible with any meal, check out Fischer’s Honey Company’s website and Facebook page.