Made in Arkansas: JR’s Kombucha Grows Presence in Northwest Arkansas

For today’s Made in Arkansas, AY About You takes a sip of JR’s Kombucha, the probiotic tea that is served in more than 50 stores in Northwest Arkansas.

Mandy Warren first tried kombucha shortly after moving to Fayetteville in 2006. In chiropractic school, she had become familiar with nutrition and how to lead a holistic lifestyle, which made her interested in trying out the unique drink. Warren instantly loved kombucha, which is a fermented, probiotic drink that promises many health benefits.

“Kombucha is really nutritious. It has a lot of good probiotics, so it’s really good for your gut. It’s also really high in B vitamins and is low in sugar,” Warren says. “It’s a great alternative to fizzy drinks.”

Warren enjoyed kombucha so much she began making it at home and served it to family and friends. She and her husband Denny run the chiropractic practice Generations Health and Wellness in Fayetteville, and her goal is to help her patients lead a healthy lifestyle. Warren began showing her patients how to make their own kombucha, and also watched as the drink exploded in popularity around the country.

“Kombucha has been around for nearly 2,000 years, but it’s only gotten popular [in the United States] in the past five to six years,” says Warren. 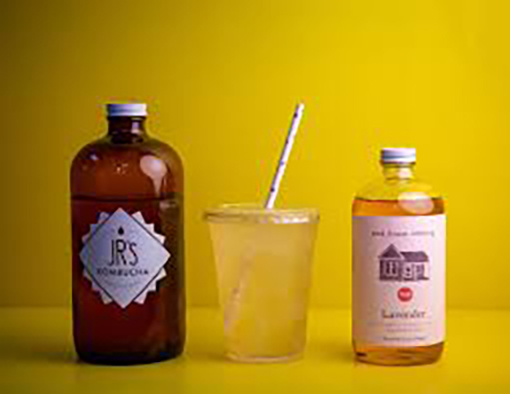 Warren’s recipe eventually became so popular that her family and friends encouraged her to start selling it. She started using the commercial kitchen space with the Food Innovation Center in Fayetteville in 2014 to make kombucha in just five gallon batches at a time. JR’s Kombucha products first became available for sale at the Farmer’s Table Cafe and Ozark Natural Foods in Fayetteville. The drinks are now available in fifty businesses across Northwest Arkansas.

Warren named the company JR’s after combining the initials of her two children, Jude and Rae, and joked the money she made could be the start of their college fund. JR’s Kombucha is available in five flavors: pineapple, carrot top, sweet beets, cherry tree and apple tree. Warren also sells an additional seasonal flavor, which is currently cider and spice kombucha for fall.

Although Warren currently has plans to sell the business, she is satisfied knowing that her drinks have been more than tasty—they have also improved people’s health.

“I know one man, and he had this ritual where he would drink a Dr. Pepper every afternoon. I talked him into swapping the Dr. Pepper with kombucha for just a week,” said Warren. “I told him it would still be good, still have that fizz that soda has. It took a bit, but now he still drinks kombucha every day instead! And he tells me how much better he feels and how much more energy he has.”