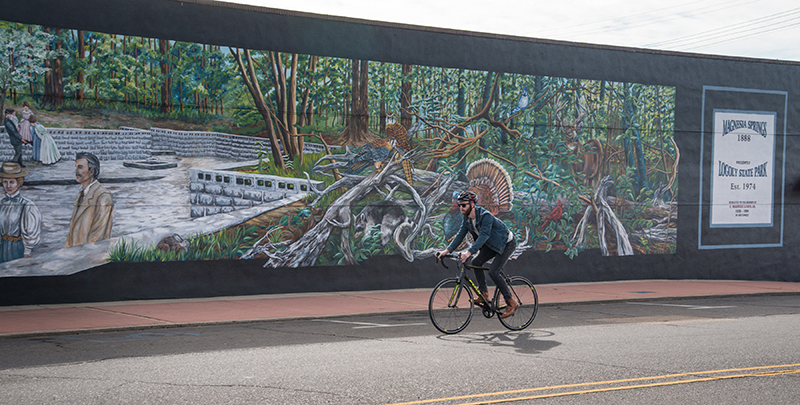 Editor’s note: Obviously, amid a pandemic, we know that making immediate travel arrangements falls counter to the state’s social distancing guidance. We want all of our readers to continue abiding by this directive so we can all do our part in flattening the curve of COVID-19 infection. However, we will also continue our mission of telling the stories that celebrate Arkansas. So if you don’t already live in Magnolia, keep this one in your pocket for when the experts deem it safe to travel again. And when you do make that trip to “LA,” don’t forget to tell us all about it.

In a good year, I’ll visit LA half a dozen times, more if I’m lucky. LA, of course, is Lower Arkansas, that region of pine-covered terrain and friendly folks making up the southern end of The Natural State. Some of my favorite LA destinations are Lakeport Plantation and Paul Michael’s in Lake Village, the Clinton sites in Hope, Texarkana’s iconic photo op on State Line Avenue and the Murphy Arts District of El Dorado.

Magnolia, the seat of government for Columbia County, is another community in LA that’s captured my attention, largely because of its appealing mix of history, commerce, festivals, public institutions and hometown hospitality. Founded in 1853 and incorporated two years later, the town was surveyed and laid out by Colonel M.G. Kelso who modeled the courthouse square design on a survey he’d done for Oxford, Miss. While there are several theories about the town’s name, the Encyclopedia of Arkansas states that “the absence of any actual magnolia trees did not keep the name from sticking.” The trees would come later. 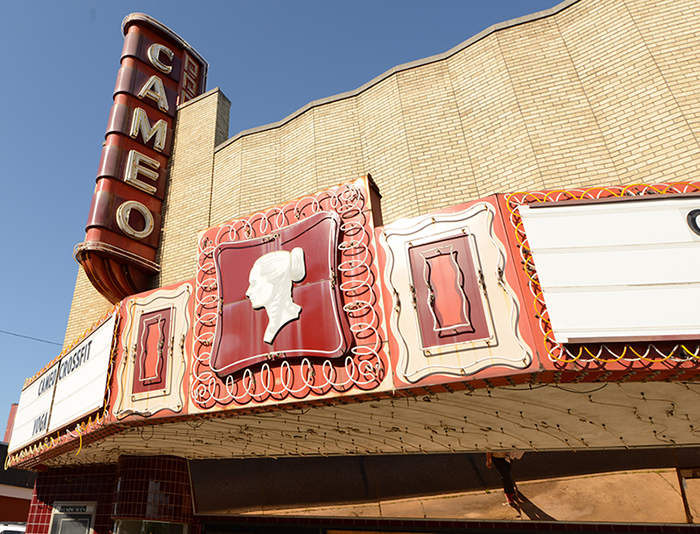 They were well established in 1941 when the authors of Arkansas: A Guide to the State wrote, “The Columbia County Courthouse, in the center of town, appropriately surrounded by magnolias, is a successful attempt at functionalism in courthouse architecture.” The handsome two-story landmark, built in 1905, was listed on the National Register of Historic Places in 1978. Thirty years later, the entire downtown — for the most part, a collection of late 19th and early 20th century structures — was recognized as a National Historic District. Many of these buildings now house an assortment of retail stores, although the legendary Lois Gean’s closed in 2018 after providing 70 years of high fashion. Today’s women will enjoy a visit to Jennifer’s (117 South Court Square) while men can peruse options at Khaki’s (108 North Court Square). Checkers, a quaint antique mall (219 W. Main), can be counted on for its always-surprising inventory, to include unusual pieces of primitive lawn statuary.

Six bright and colorful murals illustrating the history of Magnolia can be seen around the square. One of them, titled “Movie Magic,” features a scene of Charlton Heston depicting Moses in The Ten Commandments — highlighted with an autograph by the late actor. 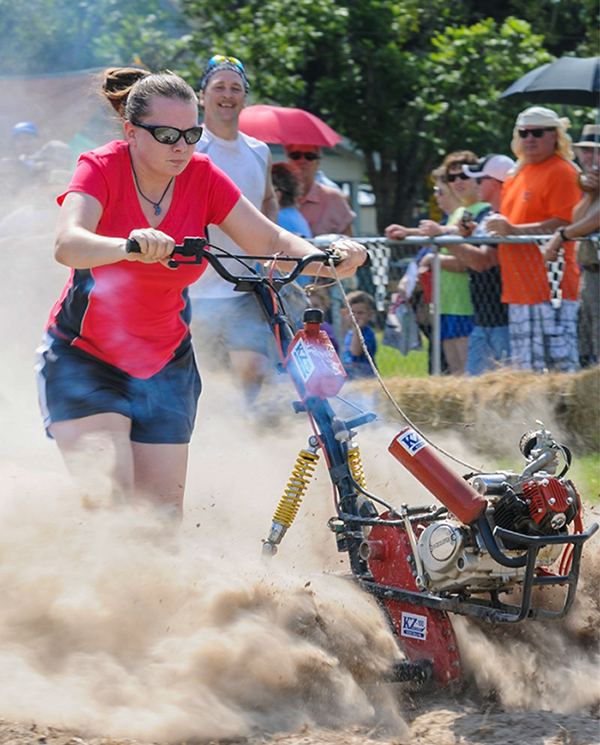 Normally in the month of May, Magnolia’s downtown square hosts the Annual Magnolia Blossom Festival and the Annual World Championship Steak Cook-Off, but the current pandemic has rendered this year’s events canceled, picking back up next May. Activities run the gamut: From a dog show to a fishing tournament, a food court to a free concert, a magic show to a parade and a walk/fun run.

A highlight of the festive weekend is the Annual Art Show, held on the square in the Magnolia Arts Center. “It really brings in all kinds of people in large numbers,” says Janet Rider-Babbitt, executive director of the Magnolia Arts Council. “Local youth and adults enter their art in a weeklong art show. Our big prize is the Bobo Shinn award for $1,000.”

Rider-Babbitt, a native of New Jersey who moved to Magnolia with her husband and infant daughter nearly 20 years ago, has fallen in love with the town. “It’s been amazing to be a part of all the growth that Magnolia Arts has had,” she says. “We are always adding new events and changing things up to better serve our community.”

As for the World Championship Steak Cook-Off, it’s a carnivore’s ultimate fantasy that must be seen to be believed. Imagine the courthouse square enveloped by a thick, blue haze from dozens of charcoal fires while lively grilling teams compete for thousands of dollars in prizes. Tickets to the cook-off will get you a 16-ounce certified beef ribeye (grilled to perfection by one of the contending teams), baked potato, salad, roll and drink. It may have been the best $25 I’ve ever spent. 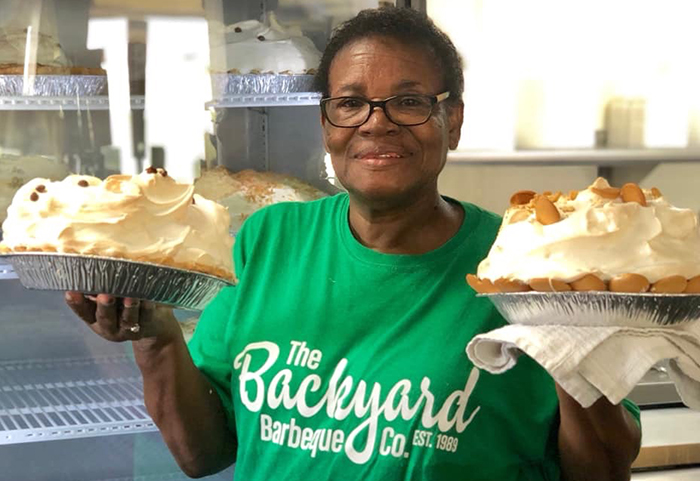 But don’t think you have to wait until mid-May to enjoy good food in Magnolia. One of my favorite places to eat is the Backyard Bar-B-Q Company (1407 E. Main Street), the No. 1 rated restaurant in town, according to TripAdvisor. Please don’t let the concrete-block exterior and rugged parking lot fool you; the goodies are inside. Owner David Greer opened the place 31 years ago and remains in charge of the meats. I consider myself something of a barbeque snob and am convinced the pulled pork and baby back ribs from Backyard can hold their own against any in the state. The baked beans (cooked with chunks of brisket) are delicious, but make sure to save room for a slice of Ms. Glenda’s homemade pies. 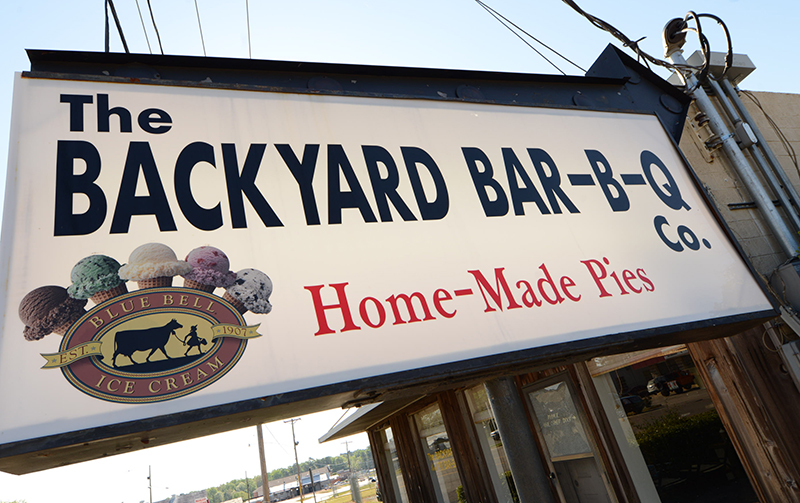 Glenda Jones began baking pies from scratch in the shop on opening day and has been there ever since. You can choose from pecan cream, coconut, lemon icebox, peanut butter and strawberry (in season). But my favorite is the chocolate cream (and the meringue must be a good 3-inches thick!). And thanks to the results of a recent election, draft beer is now an option. 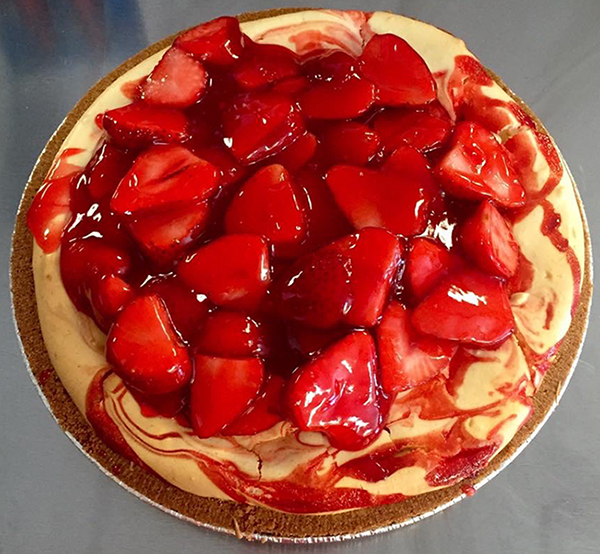 The newest addition to Magnolia’s culinary scene is Mule Kick, a combination ice cream parlor, coffee shop, taproom and pizza joint that opened last summer. Butting up against the Southern Arkansas University campus, Mule Kick occupies an unremarkable building at 2158 N. Jackson. Inside, though, is a whole different story, an atmosphere that owner Christy Ouei describes as “an eclectic industrial look.” A native of Stamps and an SAU graduate, she wanted to build a dining establishment that wasn’t your predictable college eatery. She and partner Burt Adams spent weeks traveling the South, inspecting 50 to 60 coffee shops, breweries and restaurants, looking for ideas and inspiration. Once the plumbing and electrical work was done, Ouei and Adams got busy, installing custom-made light fixtures and using a variety of recycled materials in the flooring and walls to create an exciting ambiance. One of her goals was to have repeat visitors notice something they hadn’t seen before — and she’s succeeded. Her creativity and marketing prowess has certainly caught the attention of Magnolia Mayor Parnell Vann who tells me, “That girl is a genius.”

But Mule Kick is much more than a collection of offbeat but fascinating furnishings. Where possible, its food is sourced in Arkansas. The coffee comes from Ouachita Coffee Roasters in Mena, ice cream from Loblolly Creamery in Little Rock and beers from Arkansas breweries. Ouei’s beer selection is strictly craft beers; no national brands are offered. To help her employees answer questions from customers, she took them on a tour across the state where they met brewmasters and gained familiarity with the different varieties. Beer flights — allowing patrons to sample the different brews — have proven very popular. So, too, has the menu of specialty pizza, wings, soup, sandwiches and tacos (in season). On Wednesdays, the “Trivia Night” festivities attract an enthusiastic group of SAU students and professors. 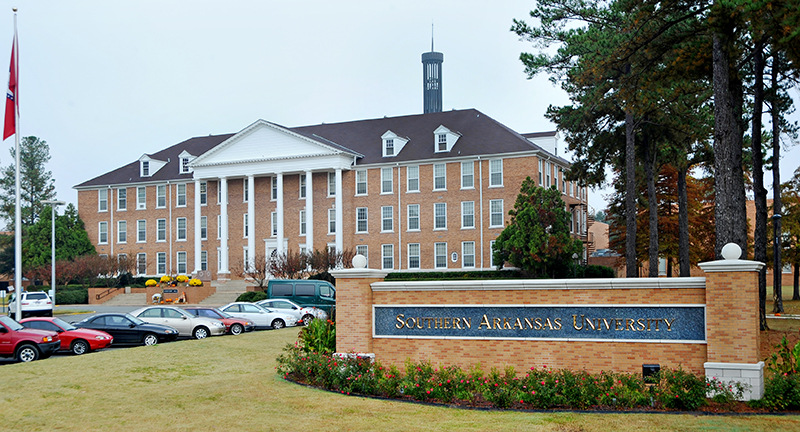 Which brings us to SAU. Originally known as the Third District Agricultural School and founded in 1909, it went through an interesting evolution before becoming SAU in 1976. And the school — the 10th largest college in the state — continues to evolve, increasing its enrollment by more than 31 percent during the 2015-2020 period, easily outpacing the nine schools ahead of it.

According to state Sen. Bruce Maloch (himself a proud SAU alumnus), the school is “one of Arkansas’ educational bright spots,” steadily adapting to meet the state’s employment needs. Maloch stresses the importance of the agricultural, business and nursing programs and noted the university’s new engineering curriculum. He gives much of the credit to Dr. Trey Berry, SAU’s president and Magnolia’s current “Citizen of the Year.”

Likewise, Dr. Ben Johnson, the recently retired distinguished professor in SAU’s History Department, recognizes Dr. Berry and his two predecessors — Dr. David Rankin and Dr. Steve Gamble — for much of SAU’s success. Johnson says these leaders have each been personally committed to the institution’s future, bringing in top-notch instructors, expanded physical facilities and even a new doctoral program in English.

Dr. Berry is justifiably proud of SAU’s growth, attributing it to an influx of young, diverse and energetic faculty members and new academic programs — engineering, marine biology, musical theater, cyber-security and game-design animation — that are attracting students who otherwise might not have considered the university. Presently, students from 41 states, 35 countries and 74 of Arkansas’ 75 counties are enrolled at SAU.

Berry, now in his fifth year as president, is particularly appreciative of the close relationship between the town and the student body, mentioning the “Blue and Gold Day” held on the downtown square at the start of every school year where students get acquainted with local merchants, church leaders and representatives from other community organizations. As for Magnolia itself, Berry says, “We could not have found a better place to raise a family.” 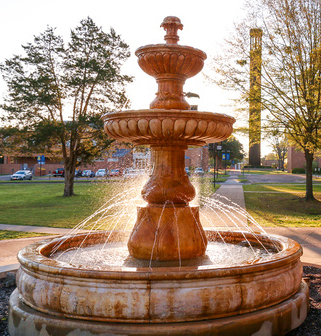 The fountain at SAU.

A mention of SAU without a reference to the Muleriders is grossly incomplete. This inimitable mascot can be traced back to 1912. One evening late that season, Coach George Turrentine invited the football team to his rural home for dinner. Given the poor roads and shortage of automobiles, players had little choice but to make the journey by mule. Watching from his porch as the athletes arrived, the coach shouted, “My Mule Riders!” The name stuck.

As you’d expect, Vann is a big fan of SAU, describing it as “the heartbeat of the city.” Now serving in his third term, Mayor Vann works closely with people outside the university including Ellie Baker and her staff at the Magnolia–Columbia County Chamber of Commerce. The city is one of five in the state participating in a Community Catalyst Program, a partnership with Entergy to engage residents in generating innovative solutions to local problems. Vann and Baker, noting the townspeople’s ability to work together to deal with issues, expect good things from the catalyst effort. They also acknowledge the long-term support from Albemarle, an international company employing several hundred people in Columbia County in its bromine extraction facilities.

“Put us on your bucket list,” Vann says in an open invitation. 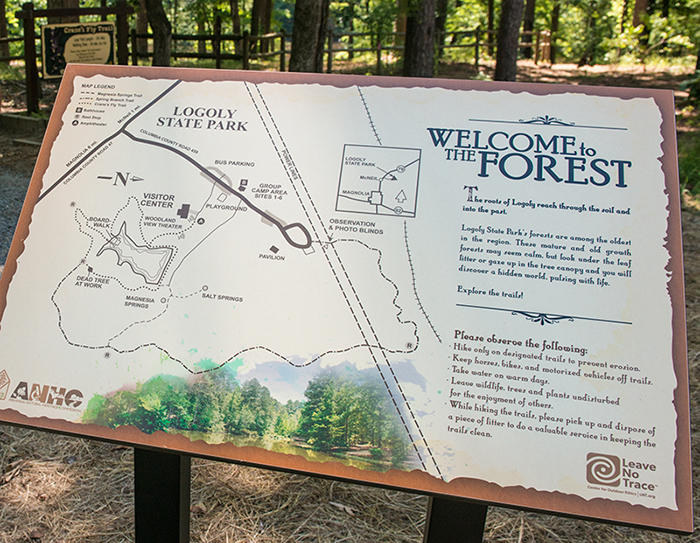 When you plan that visit to Magnolia, consider a couple of other stops in the area. Logoly State Park is located about six miles north of town just a short distance off U.S. 79. A popular health resort known as Magnesia Springs over a century ago, the land now serves as an environmental education center and also offers primitive campsites, a playground, picnic tables and a trail that winds through an old-growth forest. Park Superintendent Jim Gann feels “it’s the best-kept secret in the entire Arkansas State Park system.” The state-of-the-art visitor center — with its Gold LEED certification and hands-on interactive exhibits — is alone worth an outing. And if you’re wondering how the park got its name, Logoly comes from the first two letters of the three families (Longinos, Goodes and Lyles) who made the property available to the state.

And a mere dozen miles south of Magnolia on U.S. 79 lies the community of Emerson, home of the World Championship Rotary Tiller Race. Yes, you read that correctly. This unique experience, a key fixture in the annual PurpleHull Pea Festival, has garnered international media attention to include coverage by ESPN and a front-page article in The Wall Street Journal. The 2020 events will take place on June 26 and 27. For complete details about this exciting contest, check out the www.purplehull.com website.

So, next time you’re thinking about getting out of town for a bit, keep LA in mind. Magnolia in particular.