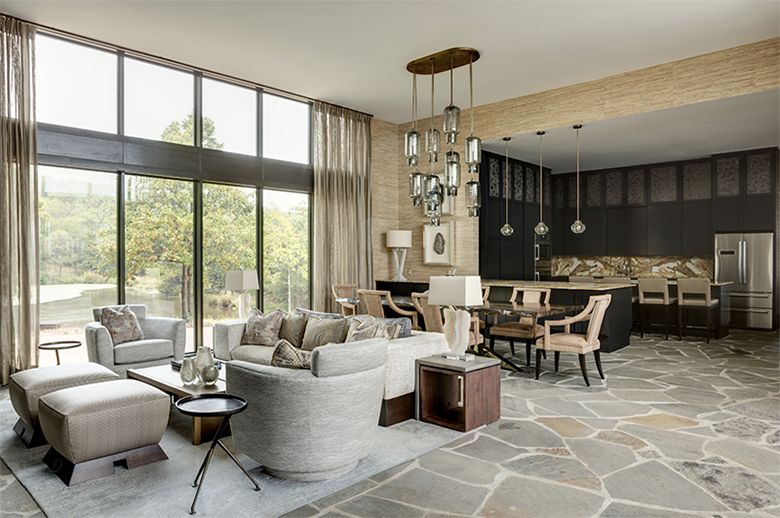 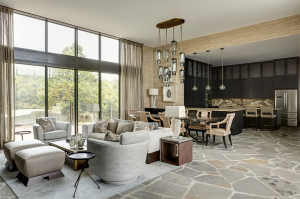 Chris Goddard, of the Fayetteville-based Goddard Design Group, fell in love with design at a very early age. Recognizing his potential, Goddard’s mother enrolled him in arts and music classes, which exposed him to the beautiful and creative expressions of the world.

His thirst for knowledge was never quenched. Goddard has traveled the globe in search of new colors, textures and designs that will serve as inspiration in his celebrated work. From Morocco to Switzerland, Goddard continues to add to his list of unique experiences, all of which translate to an unmatched eye for design that he describes as “eclectic, elegant and timeless.” 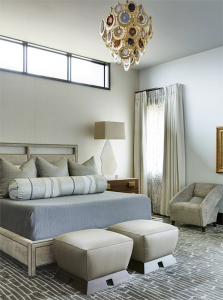 The Triple E home in Elkins brings the outside in with a “Boho Ozark Vernacular Chic,” evoking the spirit of its surroundings.

It’s no wonder why his company has been named to the world’s Top 100 Design Firms and recognized by the Royal Academy of Arts in London.
For the last 25 years, Goddard’s been putting that eye to work for clients from the Atlantic to the Pacific. But some of his most celebrated works can be found in his own backyard – from Fort Smith to Elkins.
Goddard loves a space that tells a story. Telling such a story relies on an intentional approach, one that pursues both quality and originality, he says. And that’s why, Goddard says, he starts each design with inspiration from the client, whether it’s their favorite piece of artwork, a family heirloom or even their favorite piece of furniture. Goddard then builds around the inspirational piece, “layering the unexpected” and mixing the old with the new. “A room should tell a story,” he says.
One of Goddard’s most conspicuous new works can be found less than 30 minutes away from his north Fayetteville office, in the small town of Elkins. Nestled in the Boston Mountains, a part of the Ozark Mountains range, is a home referred to by Goddard and its owner as Triple E.
The Triple E home, according to Goddard, was designed to bring the outside landscape inside by creating a space that highlights the natural beauty that surrounds it. The style, he says, is referred to as “Boho Ozark Vernacular Chic,” a new style that was created to evoke the personality and spirit of his client.
“This was a concept I based on using material inspired by nature and found in the Ozarks, such as native stone floors, heavily textile wallpapers to resemble grass, leaves and stone and colors that reflected the large wooded and pond filled property,” he says.
The home features a neutral, mono chromatic color scheme accented with organic shapes, textures and materials which help bring to life the Ozark Mountain experience. Because of Goddard’s creative process, his client put total trust in him; they didn’t even see their home until completion because “they wanted the full effect” when they walked through the front door.
Best known for his close client interaction, he pays attention to detail and incorporates old styles with a modern take, high to low perspectives, “and always a touch of the unexpected.” Goddard adapts his style with the constant change of trends and styles, but his concepts also evolve the more his relationship with his clients develop. 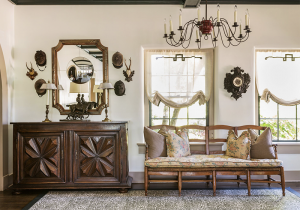 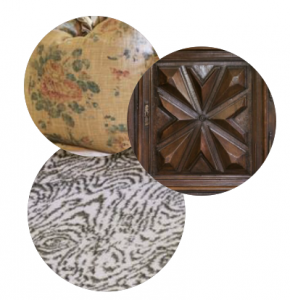 Goddard, a firm believer that each project of his should reflect the client, setting and a creative spirit, says he tries hard to make sure no two projects are ever alike and not to replicate materials, furnishings or ideas. “Much like all people are different, so should be each project,” he says.
“Over the years, my main belief has stayed the same, ‘quality over quantity,’” he says. “And the best part of my job is helping clients find their own style and passion, whether it’s through personal collections, art or things that inspire them to live a better and more comfortable life.”
For a Johnson, Ark. home referred to as Clear Creek, Goddard’s client requested a Spanish minimalist home. The design evolved into a unique mixture of modernism, which then transformed into a 1940s French Modern style. With an assortment of gold and silver tones, vintage wines and other fine French details, it was an accurate reflection of the client and her husband’s style – a space that allows the couple to live in wanderlust. 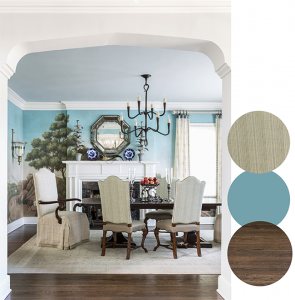 The highest compliment he has ever received is when a project “looks just like a client,” and it’s like he wasn’t even there, Goddard says.
Perhaps one of his most recognized Arkansas works is the Fort Smith home of the Steve Clark family. Goddard was commissioned to renovate the house not long after the family purchased it, and he was given just six months to make it incredible and livable.
The traditional Southern estate featured the original stone dwelling at its core, and portions of the structure were built more than a century ago. Goddard and his team worked tirelessly to bring a cheerful, lively demeanor back to the home and updated the finishes and color schemes throughout. He focused much of his attention on the contemporary scope of homeowner Steve’s art interests, as well as Steve’s wife Jamie’s passion for horseback riding. 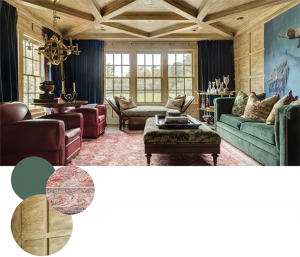 Each and every piece placed into the home by Goddard, including furnishings and accessories and his own personalized touches, left the home with a well-discerning aesthetic. Layers of details mixed with unifying color palettes and eye-catching wall coverings give each room “an ample measure of ready-made character.”
Goddard is an affiliate member of the American Society of Interior Design, or ASID, from which he received an award of excellence last year. He is also an officer in The Interior Design Society, and a member of the Fulbright Advisory Board.
“I see interiors as a collaboration between designer, client and artisans,” he says. “Quality is key, and the most important items are the one you touch the most, from heavy door hardware to luxurious textiles. Touch is the key to a space feeling warm and welcoming.”