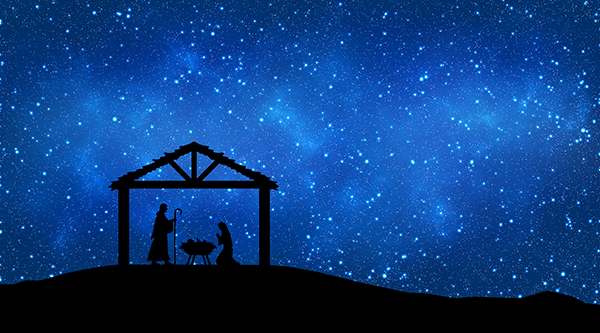 Sarah Riffle, chief development officer for Arkansas Foodbank, has at her disposal an arsenal of attention-grabbing statistics, which she deploys at will to underscore the problem of hunger in the Natural State. Arkansas ranks second in the nation in food insecurity, she’ll tell you. One in five Arkansans overall don’t know where their next meal is coming from — as many as one in three in some counties — and one in four children also go to bed hungry.

But lately, an even more sobering statistic has presented itself, illustrating the soaring need for the food bank and its 400 distribution partners statewide racing to serve the hungry in the era of COVID-19.

“One of the most profound things that we’ve seen in this time is the number of people who are utilizing our services for the very first time,” she says. “From March, which really marked the pandemic beginning for us, we’ve seen a 42 percent increase in the amount of food that we have distributed from March 15 through Oct. 15 than we had in that same timeframe in 2019. 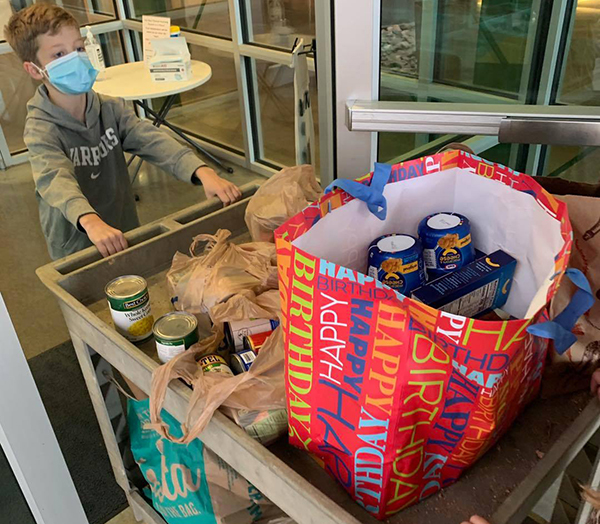 “If that gives you any idea of not only the number of people, but the amount of food that people are desperately in need of to be able to feed their families. It’s just been astronomical.”

It should not come as particularly shocking news that nine months of pandemic-fueled challenges have put a lot of America’s nonprofits in big trouble, but the actual numbers are nonetheless attention-grabbing. This summer, the Clinton School of Public Service in Little Rock conducted a survey of 316 nonprofit leaders representing small and large organizations serving all 75 counties in the state, most with a budget under $500,000.

The survey findings, released in August, showed nonprofits had lost significant revenue due to the impacts of COVID-19, as 64 percent of surveyed nonprofits reported a loss of fee-for-service revenue and 64 percent reported a decline in individual donations. 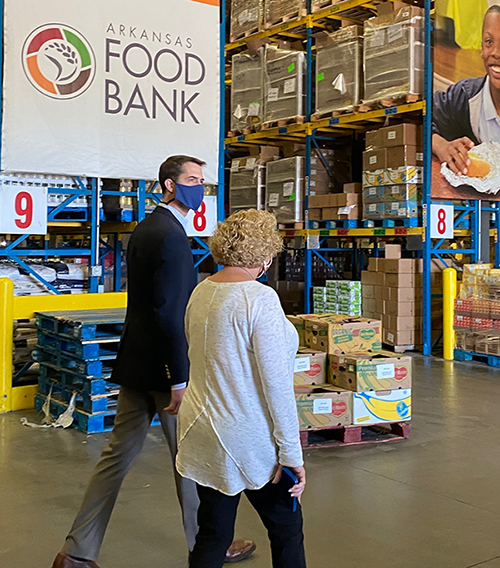 COVID-19 also impacted nonprofit employment of paid staff, with more than 30 percent of nonprofits having reduced employee hours, and 15 percent reporting layoffs. Reduced staff and limited access to volunteers, plus other health and safety concerns, have resulted in almost 70 percent of nonprofits operating at a reduced capacity, from complete program cancellations to difficulty obtaining needed supplies.

Troubling though that is, Arkansas was doing better than the nation’s largest nonprofits, as per survey findings by Independent Sector, the results of which were released in June. Among large and mid-sized nonprofits (those between 500 and 5,000 employees), fully 83 percent experienced a drop in revenues, 71 percent of which responded with a corresponding reduction in services. Almost seven in 10 of these organizations furloughed employees and half laid them off entirely during the first three months of the pandemic.

Still, it’s a stiff belt to the jaw for Arkansas’ organizations, Riffle says.

“I think there are three different main areas where we’ve really seen our way of doing business has been primarily affected by the pandemic,” she says. “First and foremost, we’ve all seen the insane skyrocket in unemployment numbers, meaning we have seen a huge increase in the demand for our services. Second, the people who are utilizing our services for the very first time don’t know how this process works. How do I find a pantry? What do you need to bring? Do I need to bring a driver’s license?

“Third, we partner with over 400 member pantries and schools to distribute food in our 33 counties. The very first issue we faced was the governor shutting down the schools. Within a week, we had to completely rethink the way that we made sure children have access to food.”

As nonprofits continue to deal with reduced funding to meet accelerated demand, many are looking to fund drives and events that fill the 2020 holiday season as particularly critical to help keep the mission moving forward. Erica Phillips, executive director of volunteer engagement for Arkansas Children’s, says the annual Festival of Stars event, now in its 18th year, is a good example. 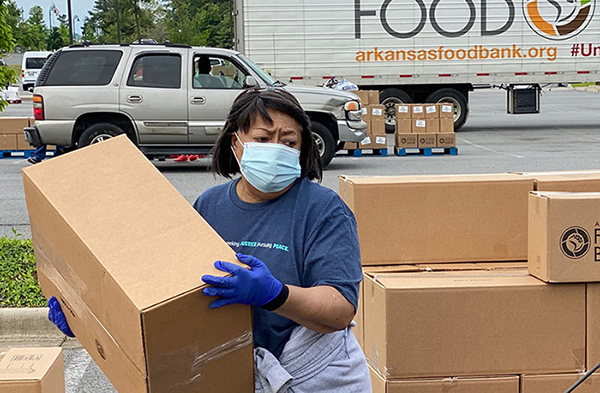 “Festival of Stars is our annual toy and donation drive that benefits patients and families of Arkansas Children’s around the state, our hospitals as well as our clinics,” she says. “The purpose is to provide joy to our patients and families during the holiday season, but also year-round. Toys and gifts and items that are raised through this effort stock our toy shelves in our playrooms and are provided to kids throughout the entire year, not only during the holidays.

Indicative of the new normal, the effort is scaling back in 2020 to only offer collection points at the Little Rock and Northwest Arkansas hospital locations. Collection efforts will again include a radiothon with partners at Little Rock’s Alice 107.7 and B98.5. Last year, that component of the drive raised more than $109,000 of the total $274,000 collected in toys and monetary donations.

Phillips says most people don’t think about toys when they think of the components of pediatric care.

“In both of our hospitals, we have playrooms that have toys for our kiddos to play with,” she says. “Obviously, they get much wear and tear and love and attention, so we have to replace those frequently. Also, we give toys away to kiddos. We have kids who spend their birthdays here. We have kids who are fortunate to have their last treatment party, or they lose a tooth in the hospital and the tooth fairy can come.

“You also think about the kiddos in our clinics who have a blood draw, or they have to get a shot or endure a painful procedure. A stuffed animal or a Hot Wheels race car are the types of things that really motivate that child to get through that hard stuff and take away the pain.

“It’s truly unbelievable the number of toys that are donated and the value associated with that. It’s very impressive, and it makes us super grateful for the community and the state and the way they come together to make that happen because it’s an overwhelming number.” 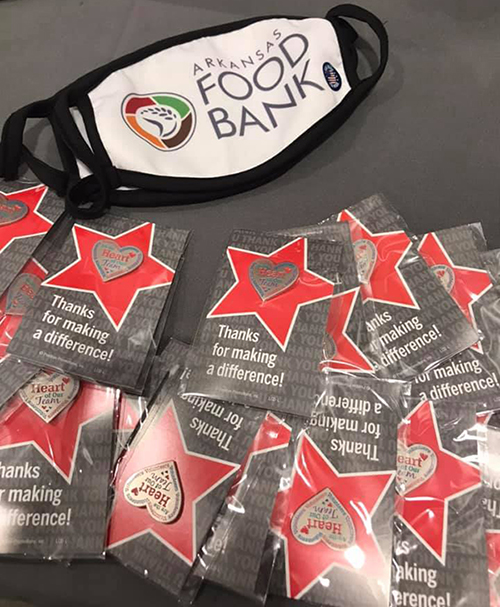 Riffle says the ongoing needs of the food bank are similarly basic; shelf-stable food items and cash. The group has taken extra steps to make donating the former as safe and worry-free as possible.

“We’ve been really trying to find creative ways for our community to be able to support us in that way,” she says. “We have food donation bins set up right at the front door and the loading dock of our food bank so people can donate food from a distance, without having to come in contact with our staff or our employees here.”

She also says while either food or money will be gladly accepted, she reminds prospective donors that the organization’s buying power allows it to stretch dollars further than the typical consumer. And, of course, those donations can be made from the safety and comfort of home.

“We’ve been really pushing folks to support us financially online because, as a food bank, our ability to acquire food is much more efficient than if someone took the same dollar and purchased it at the grocery store,” she says. “We use the meal calculation that a dollar can provide food for five meals. If you took that same dollar to the grocery store, that consumer isn’t going to get that same rate.”

Festival of Stars is Dec. 11. Visit www.archildrens.org/festival for more information.