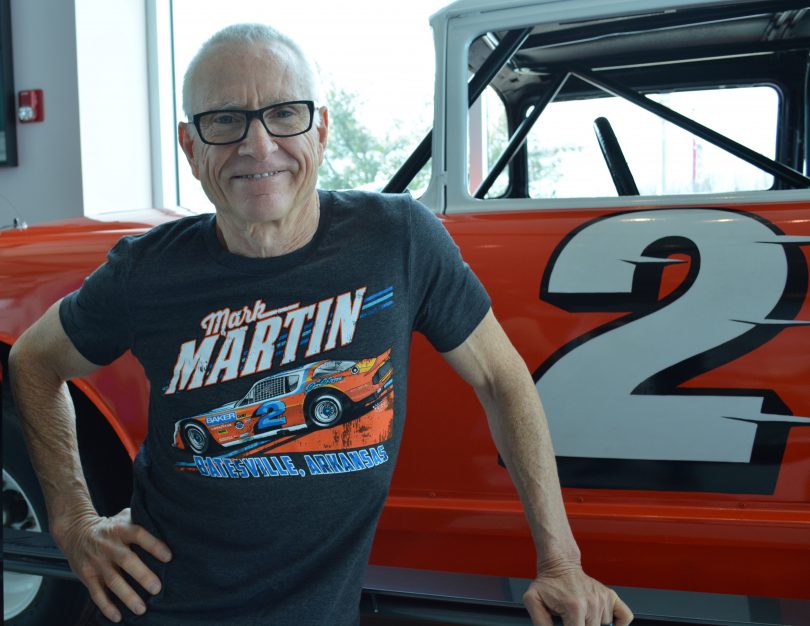 Jill Rohrbach, travel writer
Arkansas Department of Parks and Tourism
Racing Legends Jack Roush and Jimmy Fennig to attend event on Saturday
This marks the 14th and final year that NASCAR Hall of Fame driver Mark Martin will host his annual Fan Appreciation Days event in Batesville. Set for April 27-28, this year’s event includes special guests Jack Roush and Jimmy Fennig.
The event is free and Martin invites his friends, fans and family to share in the weekend.
“We’ve enjoyed celebrating with our fans during this event in my hometown now for 14 years,” said Martin. “We really look forward to this every year. It’s a chance for me to acknowledge how much I’ve appreciated all of their support throughout my career.
“We invite everyone to come join us the last weekend in April for our final spring Fan Days,” added Martin. “After this I will focus my energy on our one big event in the fall – The Race For Hope 74 – during the week of Sept. 25-29. Stay tuned as this event grows and we look forward to seeing all of you there.”
Fan Days starts on Friday, April 27 with Martin on hand for a free barbecue luncheon at Mark Martin Powersports, located at 869 Batesville Blvd. Additionally, the Hall of Fame hometown racer invites everyone to nearby Batesville Motor Speedway on Friday night for the Comp Cams Late Model racing series.
On Saturday, April 28, Martin will host a complimentary lunch at Mark Martin Ford, located at 1601 Batesville Blvd. Martin will visit with fans throughout the day. At 6 p.m., he will be joined by Roush and Fennig. They will sign autographs and tell stories centered around the trio’s tear through NASCAR in the late ‘90s.
Roush is one of NASCAR’s most successful owners and a pioneer in bringing engineering technology into the sport. He boasts a NASCAR record 325 wins and his teams have had 135 Monster Energy NASCAR Cup Series victories since he began with Martin in 1989. The duo of Martin and Roush would go on to form one of the most successful partnerships in NASCAR history. Roush was inducted into the International Motorsports Hall of Fame in 2006 and the Michigan Sports Hall of Fame in 2010.
Fennig first joined Martin’s team as crew chief in the American Speed Association in ’85. In their two ASA seasons together, the duo had nine wins, 13 pole positions and won the championship in 1986. He rejoined Martin in 1996.
Martin and Fennig had four wins together in 1997, 24 Top 10s, and three poles to finish third in the points. They finished second in points in 1998 with seven victories and remained together for three more wins until the 2001 NASCAR season. The Sporting News named Fennig crew chief of the year in 2004, after leading Roush Fenway to its second Cup Championship. One of the most successful crew chiefs in NASCAR history, Fennig has worked during his career with racing legends Bobby Allison, Carl Edwards, Matt Kenseth, Kurt Busch and Martin among others.
For more information on Martin’s career, the Mark Martin Museum adjoins Mark Martin Ford, and is open at 8 a.m. on weekdays and 9 a.m. on Saturdays. Several of Mark’s race cars are on display including a ’55 Chevy that started the driver’s dream come true in the ‘70s when he was just a teenager. Read early news reports of “The Kid” from Arkansas and see a phenomenal display of memorabilia, awards and trophies from throughout his 40-year career. The museum also has a gift shop.