To Market: Bentonville’s 8th Street Market is Growing into a Regional Must-See 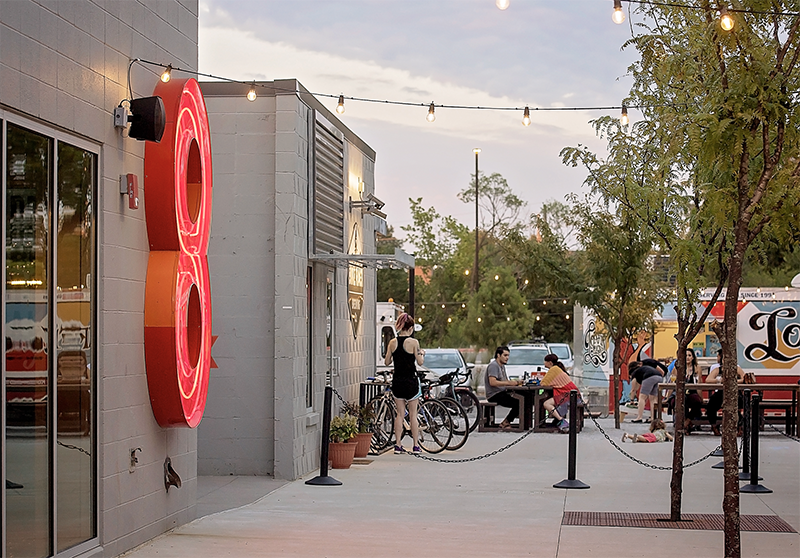 Bentonville is a growing city with incredible amenities, like Crystal Bridges, and a number of new bike trails to connect them. But what’s really sizzling is the hip little market growing on 8th Street.
The 8th Street Market opened last summer with offerings like Yeyos Mexican Grill, Bike Rack Brewing, Markham & Fitz chocolate shop and a Wednesday farmers’ market. But now, there’s so much more.
Jeff Snyder is managing director with Newmark Moses Tucker Partners in Northwest Arkansas. He says one of the biggest attractions of the market is a local hangout called The Holler, which opened last year. The space offers beer, food, meeting spaces and even indoor shuffleboard.
“It’s a great new place to hang out,” Snyder says. 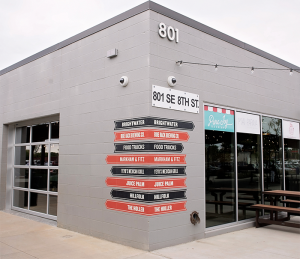 Bentonville’s 8th Street Market is buzzing with activity, a year after its opening, now featuring a number of exciting shops and restaurants.

The 8th Street Market boasts many different unique restaurants and artisans all housed in complementary creative spaces, according to Snyder. Restaurants that have recently opened include South Market, La Fonda Colombian Restaurant, a Filipino restaurant called Kalye Manila, Juice Palm and more. Four food trucks operate on the property; one from the Brightwater culinary school, Loafin’ Joes, Indian Dhaba and Louisiana Influence.
After grabbing a bite to eat, visitors to the market have an array of different shopping options. The Fancy Frog Boutique offers several Arkansas-produced products, and Hillfolk textile sudio offers craft nights and a variety of other cozy gifts. Sweet Freedom Cheese offers its products cut to each customer’s exact specifications.
The market’s greatest strength is its cohesive offerings, Snyder says. There’s just so many restaurants and shops together on one property.
“It’s very unique,” he says.
And the market’s customers are every bit as unique as the businesses offered, according to Snyder. Visitors range from teens to retirees and the full flavor of the Northwest Arkansas demographic.
“We’ve been very focused on that when we have an open space, we don’t put in the same thing. That’s not what this is about,” Snyder says.
Customers won’t find any chain restaurants or stores at the market.
What they will find is an experience without boundaries. Food can be carried between all the shops and restaurants because it’s all on the same property. Want to grab a sandwich at Loafin’ Joes then bring it into The Holler to get a coffee? That’s perfectly fine.
Jeff Charlson, with Bike Rack Brewing, says his business is reliant on the other restaurants because the taproom doesn’t sell food.
“We’re the outdoor patio of the 8th Street Market,” he says.
Charlson says he’s noticed as new businesses open up, more customers come to Bike Rack. They’ll stop by for a beer, eat dinner elsewhere in the market, then have another beer afterward, he says. The businesses in the market complement each other.
“As everything opens, our business gets better,” Charlson says.
Business owners in the market range from people who have been professional chefs for years to cooking students at the Brightwater culinary school, which is another staple of the property, Snyder says.
The 8th Street Market plays to Bentonville’s strengths as it works toward becoming a more walkable city. 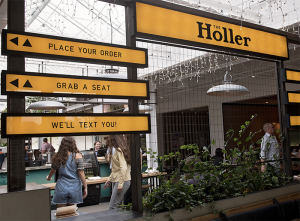 The Holler is a great spot for food, coffee and games, and it can even be the perfect spot to study or catch up on work.

“That is certainly part of this,” Snyder says.
Bentonville is really coming along with bike trails scattered through the city. And those trails connect customers to the market. On a typical
Saturday with beautiful weather, Snyder says the market is packed with bicyclists.
In total, the market houses around 15 businesses, with two spaces coming online later this year. Snyder says the 8th Street Market is focused on becoming an experience and amenity for Bentonville.
One of the biggest strengths with having such a large property (complete with indoor and outdoor space) is the market’s availability for hosting events. The market now hosts a food festival that takes place during the Walmart Northwest Arkansas Championship LPGA tournament. Bite NWA is a three-day event saw about 3,000 people each day it was open last year, according to Snyder. The event brings in food and drink from restaurants all over Northwest Arkansas for attendees to sample.
Snyder says the market will also host a fundraiser and biking event for the American Diabetes Association this year. And then, there are the smaller things the market does. For Valentine’s Day, it placed paper and crayons on tables so visitors could doodle lovely little messages or draw cartoons.
The tenants at 8th Street Market are just as excited as local customers. Snyder says the owner of Louisiana Influence was quick to renew the lease after a successful first year.
“They’re very happy to be here,” he says.
Charlson echoes his sentiments. Before any construction began on the market, it was an old chicken plant. But when he saw plans from the developers, he knew there was a special project in the works.
“We personally had faith in the developers. We said, ‘Yup, we want in.’” Charlson says. “When they say they’re going to do things, they do things.”
Looking ahead to the rest of 2019, Charlson says Bike Rack Brewing is excited to be producing a lot more beer.
“How do we grow our production to a bigger level?” he says, describing his vision.
As for the rest of the 8th Street Market, Snyder says two new businesses are set to come online later in 2019. They include a ramen shop and Cocoon Yoga. Both are under design and construction, Snyder says.
And for people who haven’t been to the market yet, it offers food for all tastes. The managing director recommended visitors come during a special event so they can experience all the unique flavors of Northwest Arkansas.
“Don’t be shy about trying new things,” he says.
For the latest news on what’s going on at the 8th Street Market, check out 8stmarket.com or the company’s Facebook page.