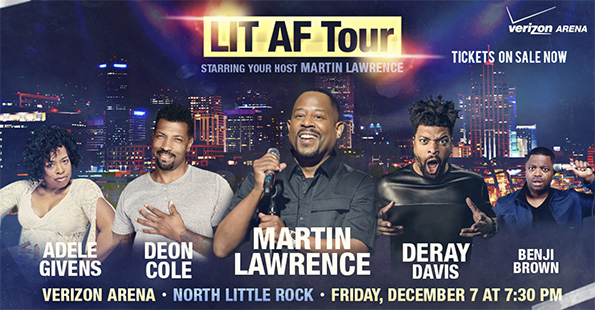 Actor and comedian Martin Lawrence is coming to Verizon Arena for a night of fun and comedy! On Friday, December 7, Lawrence and friends will stop by North Little Rock as part of the “LIT AF Tour.” He is bringing along lots of comedic talent to the stage with the show featuring comedians Benji Brown, DeRay Davis, Adele Givens, and Deon Cole.
Lawrence’s show has visited major cities across America and sold out in cities like New York and Los Angeles. Lawrence has told reporters that no two shows are the same with everyone involved with the show bringing something different. Show starts at 7:30 p.m. Get your tickets at ticketmaster.com.
The “LIT AF Tour” kicked off in March in Atlantic City, New Jersey’s Boardwalk Hall with the fall and winter shows starting at Pittsburgh, Philadelphia’s PPG Paints Arena. The last show for the current tour will take place on December 31 at Baltimore, Maryland’s Royal Farms Arena.
Lawrence has had a long and successful Hollywood career. In 1992 he hosted the HBO comedy series “Def Comedy Jam” and that same year he starred in his self-titled television show Martinwhere he played the lead character and other supporting roles in the show. His show lasted from 1992 to 1997 but he has produced and acted in several movies including A Thin Line Between Love and Hate and the Big Momma’s Housemovies. He has also starred in movies like Death at a Funeral and Bad Boys 1 and 2. He will reprise his role as Detective Marcus Burnett in the new movie Bad Boys for Life set to release to theaters in 2020 with co-star Will Smith reprising his role as Detective Mike Lowrey.
See Lawrence’s full tour schedule at martinlawrence.aegpresents.com
RELATED: Check out this week’s Live Music Lineup!