The call to set up the interview with Matt DeCample for AY Magazine wasn’t returned immediately and when it was, Matt had an unexpected suggestion: Would I care to interview him while he took his chemo treatments at UAMS? I was shocked that he would have a writer chronicle his cancer journey in such a personal setting, but I immediately said yes.
We spent almost two hours together, during which time Matt talked about his condition as nonchalantly as a cowlick or a crazy ex – something you’d rather not have to deal with but, life being life, came your way anyway. Most of all, he was funny.
Matt laughed at his condition all the way to its conclusion, which came for the former TV reporter, political spokesperson and improv comedian on March 3. Following his diagnosis with liver cancer at 41, he’d tweaked cancer’s nose for three long years, much longer than conventional medical thinking believed he could.
He blogged about his disease (Mattie D vs. The Evil C), joked about it onstage with his pals at The Joint in North Little Rock’s Argenta and took a little of its power every time he made it to another day. Whether you met him once or worked with him for years, he always left you better than you were before. 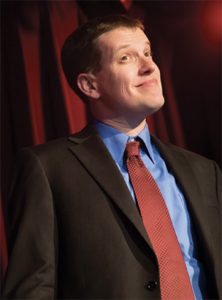 A native of Seattle, Matt came to Arkansas in the 1990’s as a reporter for KATV Channel 7 in Little Rock. Later, he joined then-Attorney General Mike Beebe’s staff as a spokesman and four years later followed his boss into the governor’s office where he served as press secretary and communications chief for eight years.
During his battle he’d become an advocate for better access to health care and cancer research, recently traveling to Salt Lake City, Utah, to speak at the Cholangiocarcinoma Foundation’s annual conference.
He was also, by every account, a professional friend-maker. When the AY article appeared and started making the rounds, thousands chimed in with mentions of love and support. Like the condition that ultimately claimed his life, he had a way of rooting himself into your system and never letting go.
Matt underwent treatment for his aggressive condition in Little Rock and recently blogged about being in a clinical trial for a new cancer medication at the National Institute of Health in Maryland.
“I’ll be back and forth to Maryland for a few days at a time, less frequently as the cycles go on, unless there are unexpected developments,” he wrote in what would be his last entry on Mattie D. vs The Evil C. “Bethesda is the new front in the cancer war and it won’t always have the 1˚ wind chill it had upon arrival. I didn’t order the cryo-therapy, thank you.
“Here I lie reclined on the frontier of yet another Undiscovered Cancer Country. Even more than usual, no one knows what comes next. I’ll just keep betting with house money until the next thing happens.”
READ MORE: The Joker: Matt DeCample’s Medicine is Laughter
By Dwain HebdaMarch 4, 2019
Share this post
Share on FacebookShare on Facebook TweetShare on Twitter Pin itShare on Pinterest Share on LinkedInShare on LinkedIn Share on WhatsAppShare on WhatsApp