Men of Steel, Women of Wonder 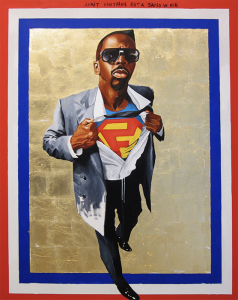 Fahamu Pecou, Nunna My Heroes: After Barkley Hendricks’ ‘Icon for My Man Superman’, 1969, 2011 Acrylic, gold leaf, and oil stick on canvas, 63 x 49 ½ in. Nasher Museum of Art at Duke University; Gift of Marjorie and Michael Levine

Few pop culture figures have had as much an impact on American life as Superman and Wonder Woman. Since their inception – 1938 and 1941, respectively – the pair has woven their way into the fabric of Americana. Created in times of economic adversity and world war, Superman and Wonder Woman quickly emerged as beacons of American morality. They represented cultural ideals of truth, justice and the American way.
Beginning February 9, visitors to Crystal Bridges Museum of American Art, in Bentonville, will have the opportunity to examine these iconic figures through the perceptions of a wide range of artists. From Depression-era works to today’s contemporary artists’ interpretations, the new exhibit entitled Men of Steel, Women of Wonder will feature over 70 paintings, photographs, installations, videos and more.

Crystal Bridges Curator Alejo Benedetti developed the exhibit in an effort to offer fresh perspectives on these cultural icons. The works of art explore national identity, American values and the concept of humanity. “It looks at how artists use Superman and Wonder Woman to talk about social politics, American identity and humanity itself, ” says Benedetti.
“I was thinking about how we could activate some of the works from our collection of 1930s and 40s labor prints in a small focus show and ran back across a print by Sam Margolies: Men of Steel,” says Benedetti of his inspiration for the exhibit. “It got me thinking about Superman’s real-world inspirations and what a small show on that topic would look like.
“Pretty quickly, this idea grew into a much larger show that looked at how this character existed in the art world,” he adds. “We added Wonder Woman into the concept for the exhibition, as together, they function as the mother and father of American superheroes. The Margolies work still remains in the show in a section called Origin Stories, along with a few other labor prints from the Crystal Bridges collection.” 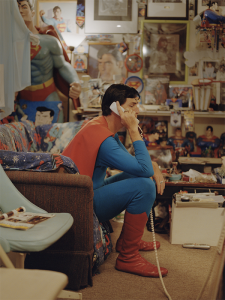 Benedetti says the exhibit is the first of its kind, the first to look at an artwork response to these iconic characters. “Additionally,” he says, “because these are characters we all know from our daily lives, this show is widely accessible, but will provide a lot of new ways for guests to engage with these characters.”
While America during the time of Superman and Wonder Woman’s advent was a much different place, the two pop culture figures continue to resonate with swaths of people across the globe. Benedetti credits the characters’ malleability and vulnerability with their longstanding popularity.
“These characters are always evolving over time and constantly adjusting to the world around us and the concerns of the day,” he says. “The other part of it has to do with their vulnerabilities. Yes, these are incredibly powerful, often near-perfect beings we aspire towards, but they also have very human limitations and flaws that poke through. Every time we see those chinks in the armor, it helps us relate to those characters, making them that much more relevant to us.” 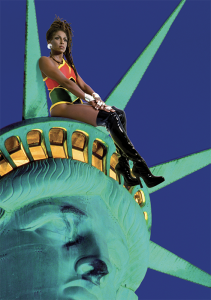 Renee Cox
Chillin’ with Liberty (from the Raje series), 1998
Photograph
60 x 42 in.
Courtesy of the artist

Benedetti says it’s difficult to say which of the 70+ pieces in the exhibition is his favorite, but if pressed, would choose Mike Kelley’s Kandor 17. “It’s probably the one that is most important for my own connection to Superman,” he says.
“I saw this work, along with a number of other works from the Kandor series, when I was in graduate school,” he adds. “I was instantly hooked by their strange beauty and intrigued by Kelley’s fascination with an obscure Superman reference. It was so bizarre that it got me to start looking into Superman for the first time. I ended up becoming a fan of the character, delved deeply into Kelley’s series as a researcher, and ultimately, I’m sure it’s why, years later, when I saw the Margolies print, it made me think of Superman.” 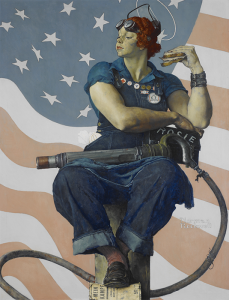 Crystal Bridges’ Men of Steel, Women of Wonder exhibition is open to the public from February 9 to April 22. Admission to the exhibit is $12, and free to members and those ages 18 and younger. Admission to the museum’s permeant collection is always free.