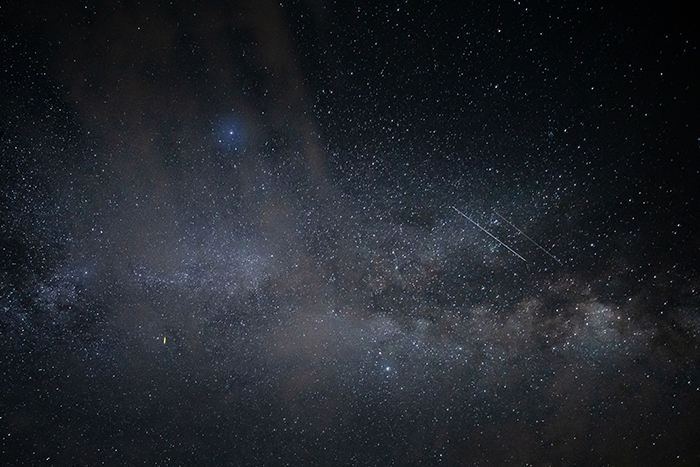 During my childhood years, my family and I enjoyed many fine weekends on Lake Norfork in the Ozarks of north-central Arkansas. Our cabin is on a quiet dirt road surrounded by dense woods, and when we turned off the lights in the evening, the stars, planets and the moon provided the only illumination. Often we’d place blankets on the ground, lie on our backs and gaze into the heavens, sometimes spotting the newfangled satellites that raced across the night skies during the 60s.

What we preferred to see, though, were shooting stars. The short-lived but dazzling bursts of light, called meteors by scientists, always drew gasps — and then we’d each make a secret wish. They continue to flash through the Arkansas skies, although they’re more difficult to spot nowadays because our nights aren’t as dark as they once were.

Nearly all of the ancient (some 4.5 billion years old) interlopers from outer space burn up as they encounter the friction of our atmosphere — thus the streaks of light. A few are large enough to smash onto Earth before they’re completely consumed by the enormous heat. Those rare examples that survive are known as meteorites.

Estimates suggest that four or five dozen meteorites weighing half an ounce or more fall within the state every year. Arkansas is a great place in most respects, but it’s nowhere near the top of the list when it comes to finding meteorites. Most meteorites contain lots of iron, meaning they’ll quickly rust and decompose in the state’s wet climate. Plus, Arkansas’ vast forests aren’t conducive for successful meteorite hunting. Although meteorites collide into the ground indiscriminately, certain locales — such as the Midwestern prairies or the open deserts and dry lake beds out west — offer better chances to recover these fascinating objects. 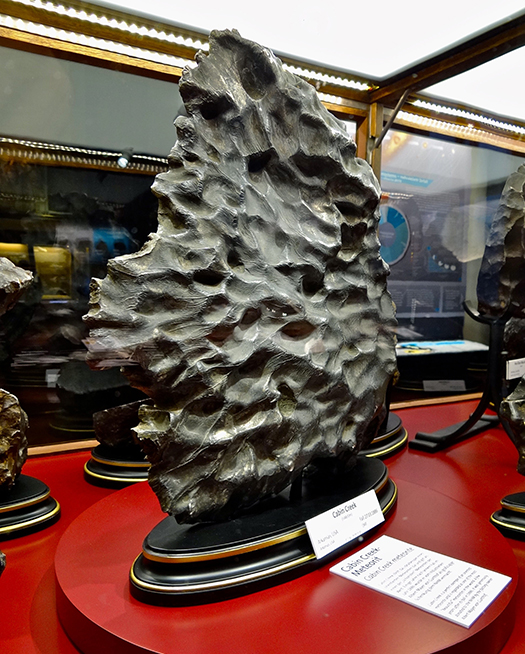 Nevertheless, Arkansas can claim several notable incidents involving such celestial objects. First was the Cabin Creek meteorite which crashed into the Earth a couple of miles east of Cabin Creek (present-day Lamar; Johnson County) at 3:17 p.m. on Saturday, March 27, 1886. Mrs. Christopher Shandy was at home that afternoon when a tremendous noise, far louder than any thunder she’d ever heard, startled her. Dashing outside, she saw limbs plunging from a tall pine 75 yards away. When her husband returned a couple of hours later, he and their hired man investigated the peculiar disturbance. Near the base of the tree, they found a large hole surrounded by a thick ring of freshly disturbed dirt. Climbing into the crater, they dug 3 feet through a layer of warm, charred soil and found the meteorite, still almost too hot to handle.

This Cabin Creek meteorite, as it’s now known, caused considerable alarm well beyond the Shandy farm. People living 75 miles away heard the blast while teams of horses 25 miles distant ran off, spooked by the noise. In an article about the meteorite, the Russellville Democrat reported, “The noise it made when it struck the earth’s atmosphere on the 27th of March and came whizzing to earth … will never be forgotten.”

A local man paid Shandy $35 for the 107.5-pound specimen and sold it to a dealer from Eureka Springs who exhibited it for a time, charging spectators 25 cents each to see it. In 1887, a prominent New York collector purchased the stone (dubbed “the 10th wonder of the world”)  for $500 but failed in his attempts to sell it to the Smithsonian. Three years later, an Austrian industrialist paid $40,000 for the meteorite and gave it to the Vienna Museum where it’s presently displayed. 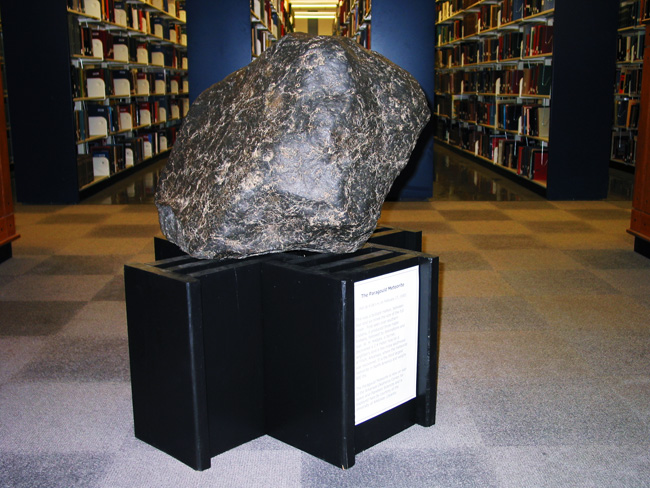 What’s known as the Paragould meteorite shot across the early morning skies of the state’s northeastern corner on February 17, 1930, before fragmenting and then plunging into the soils of Greene County. The fireworks began slightly after 4 a.m. with early risers in St. Louis and southern Illinois spotting what they thought was a crashing airplane. Based on those reports and others, experts determined the meteor entered the atmosphere above southern Indiana heading southwest and passing over southeastern Missouri where it exploded into a trio of enormous fireballs.

In Paragould, the sky instantly lit up, followed by three ear-shattering sonic booms. “You never heard any louder thunder or never saw any brighter lightning than that,” said one witness. “It really made a terrible racket.”

Three large fragments apparently came to rest in the area, but only two were recovered. The first, located just hours after impact, was unearthed behind the Finch Baptist Church a short distance southwest of Paragould. Found by a farmer at the bottom of a two-foot-hole, the 80-pound piece is now on display at the U.S. National Museum in Washington, D.C.

Four weeks later, another farmer discovered a second, much larger piece within a few miles of the other landing site. This 820-pound meteorite created a crater 9 feet deep, throwing dirt 100 yards in every direction. A group of five able-bodied men and a team of horses struggled for hours before they were able to extricate this massive extraterrestrial gift — which is now recognized as the second-largest meteorite to be recovered in North America. 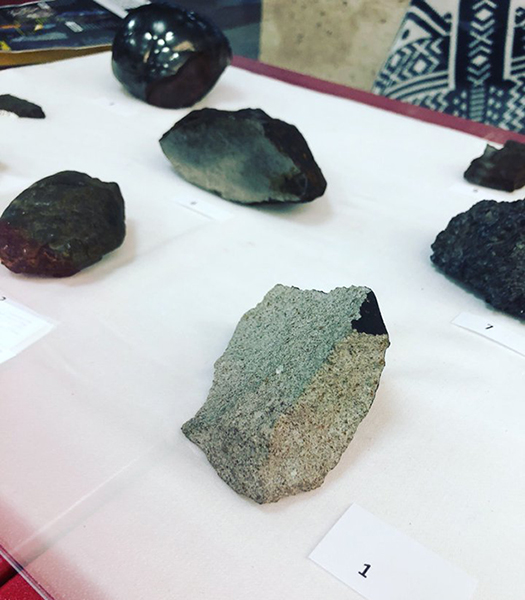 Meteorite specimens on display at the University of Arkansas.

Harvey Nininger, a professor from Kansas and later to be acknowledged as “the world’s first full-time, self-employed meteoriticist,” bought the big fragment shortly thereafter for $3,600 — or about twice the median household income in the United States at the time. After selling it for $6,200 to Charles Field who presented the relic to Chicago’s Field Museum, Nininger used his profits to establish a career in tracking down meteorites around the globe. The Field Museum’s Paragould meteorite is on loan to the University of Arkansas where it can be seen at the Old Museum Building.

Fayetteville itself experienced a meteorite encounter in late 1934 when several interplanetary chunks blasted through the mid-day skies and landed near town. Two pieces, one weighing a bit over 5 pounds and the other coming in at nearly a quarter of a pound, were recovered. The former was found at the bottom of a 20-inch crater, still warm from its turbulent trip through the gases enveloping Earth. Both examples are also housed in the University of Arkansas Museum collections.

Lastly, I must mention that Arkansas is home to Steve Arnold, a professional meteorite hunter, who’s visited most of the continents in search of these elusive treasures. If you want a truly out-of-this-world keepsake, explore his shop in downtown Eureka Springs. It’s the only brick and mortar meteorite store in the Western Hemisphere.