Mid-America’s Dino-Lites Roars Back to Life 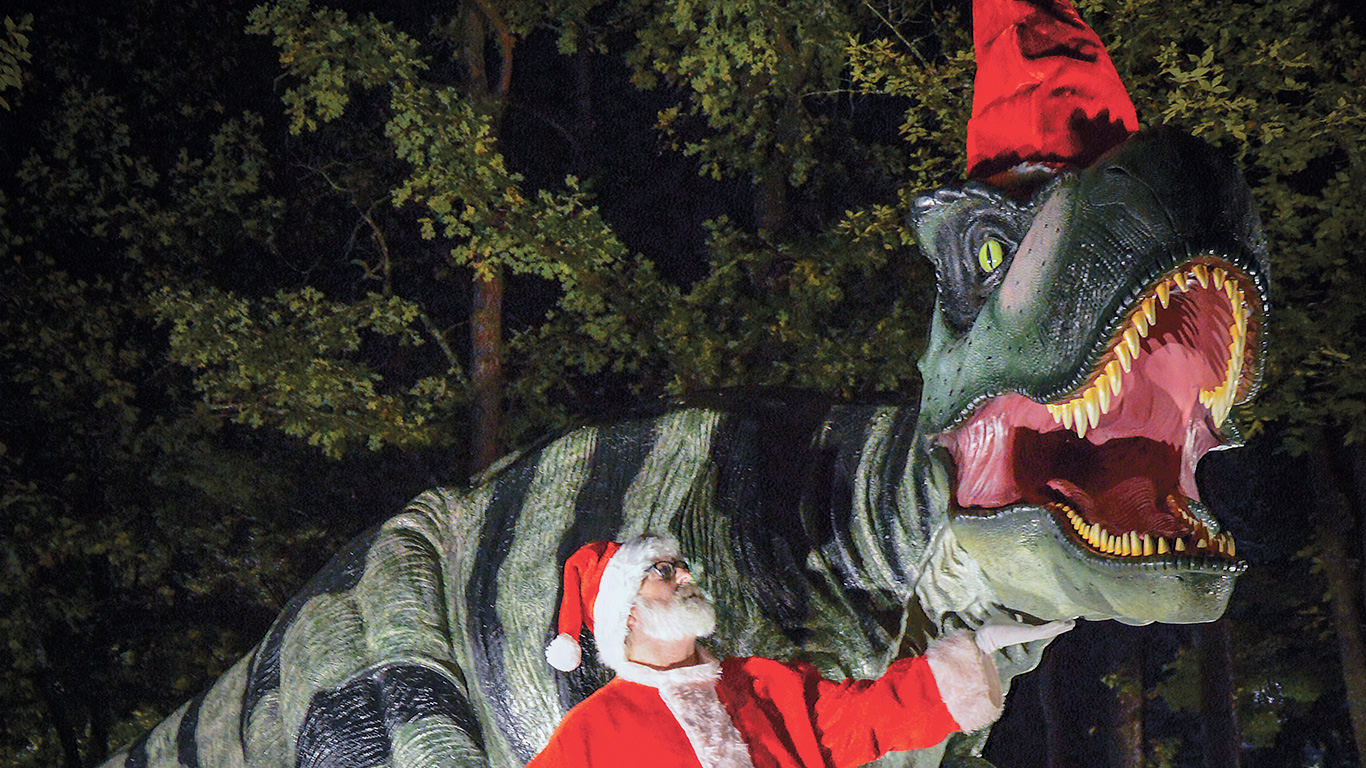 Bah humbug! Who says dinosaurs don’t exist anymore?! Oh, but they do! In fact, a group of them have taken up residency in Hot Springs. Their specific address is at the Mid-America Science Museum, a most respected spot to call home as it’s an affiliate of the prestigious Smithsonian Museum. Sitting on 21 wooded acres, the museum has a mile long trail called the Dino Trek which gives these notable residents lots of room to show off. In the Trek’s Triassic, Jurassic and Cretaceous areas, the dinosaurs are now all dressed up for the museum’s annual holiday event called Dino-Lites. Who knew these bad boys liked donning lights, among other carefully chosen embellishments? They are hoping you might come on down to see them.

How does a dinosaur get all dressed up? With lots of help! Local individuals and organizations “adopt” one or more of the 15 dinosaurs. And, you know when grownups earnestly revert to their childhood, magic happens. As a guest, you’ve got the easy part. Meander the paved, almost entirely accessible trail, gawk at the specialness created, check out the size of these full-scale dinosaurs (yes, the T-Rex is huge!), learn about the different species and shoot lots of great photos! While you are out among the Dino-Lites, be sure to notice the museum’s Bob Wheeler Skywalk which will also be lit up. It’s won more state and national design awards than there are dinosaurs here.

And don’t forget to vote for your favorite dino at the end of your trek (yes, the grownups are competing.) The competition is as tense as a brawl between dinosaurs. Last year’s winner was the Piney Fire Department’s adoptee. Seemed perfectly natural to them to outfit their dino as one of their own. So, next to their tree lit all in red, their fire hose spouting “water,” there was maybe the first-ever dinosaur to wear a fireman’s outfit. Hasn’t been the only dino to pull up its pants though. The Garland County Library memorably did dinos in different pants, having taken a page from a children’s book about another garment-wearing dinosaur. Then there was the Harry Potter dinosaur. Who knows what kind of specialness will be conjured up for this year?

Your window of opportunity is not unlimited though. The dates are from Nov. 26 to Dec. 18. The actual Dino-Lites time is 5 to 7p.m., but definitely go earlier so that you don’t miss the museum itself. At 65,000 square feet, it could hold a dino herd, but instead 100 permanent exhibits wait for you — one after another, like gift after gift. But if the thought of going inside a museum makes you stifle a yawn, you’re in for a surprise.

“We were sort of a leader in a new museum experience in that we shifted from static galleries where you couldn’t touch anything to a hands-on science museum center. Because of that, we’re able to offer deeply engaging experiences,” explains COO Noreen Killen of their 1979 opening. Since then — little hands, big hands — everyone’s welcome to get all touchy-feely with the exhibits.

Once inside the museum, you’ll want to feed your dino fervor by checking out the life-size cast of a Mastodon dinosaur. The thing to really take in at this point is that Mastodons, and many other dinosaur species, actually did roam Arkansas in prehistoric times. In fact, around Nashville (Arkansas) they have found many fossils of the Sauropods. Right here in the museum is a real fossilized Sauropod footprint. This being an interactive museum, you can touch the actual place a real dinosaur stepped! Yes, grownups too!

Want to surprise someone with a truly unforgettable gift this year? Rent the museum for a private Dino-Lites party! The museum’s staff is experienced in hosting all types of event — holidays, reunions, corporate functions, anniversaries and definitely birthdays — the Mad Scientist party being a favorite. And anytime is good for the website’s fun Scavenger Hunt. Just don’t forget, there’s a whole bunch of dinosaurs who have been busy getting their lights on and pulling their pants up (maybe) just to show off for you. No Bah humbug about it!