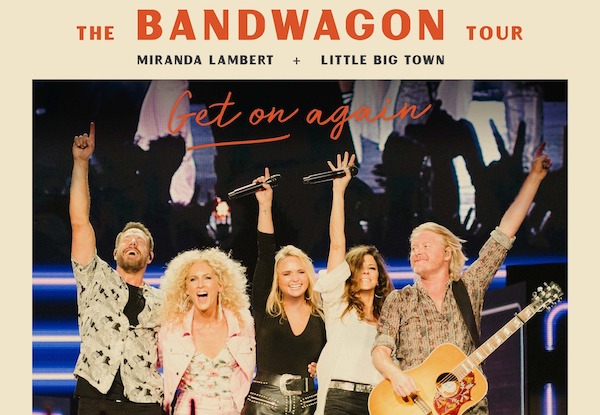 Miranda Lambert and Little Big Town, multi-Grammy, CMA and ACM award winners, have announced a May 8 appearance at the Walmart AMP as part of The Bandwagon Tour.

Both artists together hold a combined 43 ACM awards, 23 CMA awards and seven Grammys. Lambert’s latest single, “If I Was A Cowboy,” is currently climbing country radio charts, while her recent collaborative project, The Marfa Tapes, is nominated for a Grammy at the upcoming awards ceremony, after being named among 2021’s best by American Songwriter, Billboard, LA Times, Rolling Stone, TIME, Vulture and more.

Tickets sales will go live on Friday, Jan. 14 at 10 a.m. and can be purchased online, or at the Walton Arts Center and AMP box offices. Fast Track for early access to the venue and lawn chair rentals can be added to your order for $10 each, and will only be delivered by mail. Attendees will receive their tickets and optional add-ons 30 days before the event.