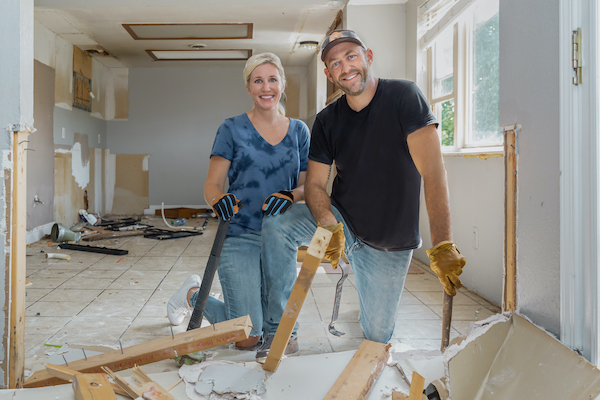 More fixing, more fabulous, more family and (perhaps) a furry addition — is what fans can expect from HGTV’s Fixer to Fabulous this fall. After two successful seasons of renovating homes in the Bentonville area, Arkansas’ own Jenny and Dave Marrs are coming back for number three. Last season, more than 35 million viewers tuned in to watch the couple surprise homeowners with amazing remodels while getting a glimpse of their five adorable kids and their family farm.

In response to the show’s success, the network is rolling out more Marrs content. A one-hour Christmas special, Fixer to Fabulous Holiday Surprise, will air in December. Fixer to Fabulous Welcome Inn will premiere exclusively on discovery+ in early 2022, and Jenny and Dave will also appear on Rock the Block early next year.

Despite the show’s increasing popularity and their growing recognition, the Marrses continue to “hold it very loosely with open hands,” as Jenny says.

AY About You checked in with the duo to learn more about the upcoming season and hear what it’s like to go from small-town business to hit show.

What can we expect from season three?

Dave: There are so many feel-good stories in season three. It really has been a feel-good kind of year. With the remodels, we’re trying to go bigger and better and do the unique spaces as much as we can. Like last year, we don’t stick to a specific style. It’s not just historic houses or just modern houses. It’s really a good variety of different styles. I don’t know how Jenny does it, but she can just flip from mid-century model to modern to historic to Craftsman and juggle all three of them at the same time. So, there’s a bunch of different styles this season.

Will we see more of your kids this season?

Jenny: The kids will still pop in every so often. We don’t want the show to be something that is too much a part of their lives. If they’re home and they want to pop into the barn while we’re working on something, that’s great. They appear on the show sometimes because the show is just part of our lives. But we try to not make too big a portion of the show be the kids.

Dave: We’ve been doing this for four years, so our kids just think of it as we’re going to work. We leave it up to them most of the time. With kids, it changes on the day. Sometimes they like coming out to work in the shop with me. Lately, it’s been more the girls, Charlotte and Sylvie, who are coming out to help with the jobs. This season will probably show more of them than the boys, which is different from previous years. The boys are getting older, and they have other activities they’re involved in.

Your Christmas special sounds exciting. What can you tell us?

Dave: We’re really excited about it. It’s a community-led project where we worked on upgrading the Bella Vista animal shelter. It will air right around the holidays, and it is all great. It’s all really cool stuff. This is the first time Jenny and I have renovated a house for animals. A bunch of people in the community came together. They donated their time and their talents and made a great transformation of a place that is already doing great things. It was a lot of fun to be a part of that.

Jenny: (laughing) We may or may not have added to our fur family through this process. Some people can’t possibly renovate an animal shelter without coming home with an animal. I’m not going to say who that is.

By now people are surely starting to recognize the two of you. How do you handle that, and what is that like for you?

Dave: We’re very fortunate in our community that everyone is generally really nice. Sometimes, when you’re out, there’s that odd stare where someone is staring at you, and they know they know you from somewhere, but they just can’t place it. And I’ve done that before too. So usually just by saying, “Hi,” and we start to talk, they realize it. Now, when we’re all together, people know because we are a unique-looking family. But Bentonville is small enough that, for the most part, people are really respectful of our privacy. They just say, “Hi, love the show,” and I love that. That’s the reason we did this — because we love our town, and we want to highlight what a great area we live in. For people to come up and say, “Hey, I love the show; you guys are doing great,” — I love it! That’s such a compliment. We really appreciate that.

You were already very well connected in Northwest Arkansas through your kids, your construction business and friends. Does this level of recognition feel like a natural extension of that?

Dave: Definitely. We were already connected to a lot of people in our neighborhood. It’s one of the reasons people are drawn to the show and are drawn to other HGTV shows that are about these small towns. It speaks back to a time where you knew your neighbor and you were in your community, and you talked with people. I think there are so many people in America who are longing for a place like that. That was our real life before we ever filmed the show. There isn’t a day that goes by that you don’t see several people you know. I love that about our town.

Jenny: I totally agree. We have a really great community of friends and people at our school. For me, it’s been really fun to see how our tribe of friends and our family have been super protective of us. If we’re out and people recognize us, we enjoy saying, “Hi,” to everybody, but our friends are very protective of us. It’s been really sweet to see that in this world of weirdness that we never expected. They’ve been along the entire ride with us since day one. We have several friends who now work with us on the show, and the show has become very much a part of our community and our people. It is part of all of our lives, not just Dave and I.

How long do you see yourself doing this show?

Dave: I think that answer changes based on the day, based on the job, based on where we’re at. Again, the only reason our show exists is because people are willing to watch it. I think it’s the viewers who make it possible for us to be on this show. Regardless of the contract we have or how long we stay, it’s based on ratings. If we don’t perform in ratings, then I guess that’s a good indicator that people are over us and maybe we should hang it up.

Jenny:  For me, it’s a matter of our kids. If our kids ever say, “I don’t want to do this anymore,” then we would stop this immediately because our family comes first.

Jenny: This is what we consider when we go forward — our balance. Our production company does a really good job of helping us create some boundaries for our kids, but it’s really hard for me as a mom — especially with Luke being so little — to miss so much of these years. I want to figure out a better way to balance a little more so that we can do this and be more sustainable long term. But I do really believe that this show is our ministry. It reaches out to people in a time when our world is increasingly scary and dark, and people have fewer options of turning on the TV and watching something together as a family that’s positive and lighthearted. That’s what our show is, and that’s what we want it to be. We want it to be a place that people can feel is a safe place for the whole family. I love when people say their kids watch this show. For our family, it is our ministry that God has given us in this season of life. As long As God is asking us to do this, we’re going to figure out how to do it. Unless for some reason our kids say they don’t want to have anything to do with this, then we’ll stop. But for now, we don’t really have a known timeline on any of it. None of it was expected, so nothing is expected going forward either. It could all end tomorrow or it could last 10 years. We have no idea, and we’re holding it very loosely with open hands.

Dave: We’ve learned through adoption and through so many other experiences in life that whenever we try to put our timetable on something, it never seems to work out how we thought it would. So, we just take it episode by episode, season by season right now. Like Jenny said, this is such a big part of our community. We have our production family and there are a lot of people who are impacted monetarily who work on the show and so many more who send us such great messages and are impacted in other ways. When you talk about a great feeling, that is a great feeling. That’s something we never thought or expected to have that kind of response. It’s been wonderful.