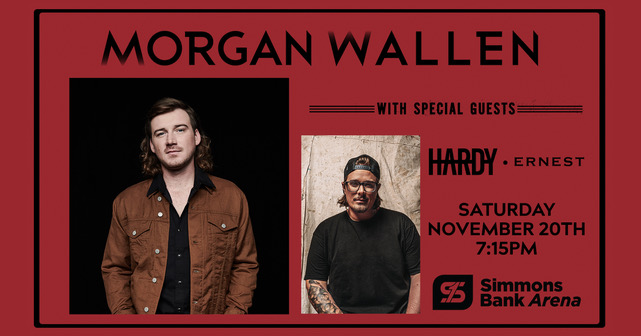 If rock bottom is calling your name, you might be happy to hear that country’s newest golden boy, Morgan Wallen, is coming to Simmons Bank Arena in North Little Rock.

Ditch that hole in the wall and ride out to Simmons Bank Arena on Nov. 20 at 7:15 p.m. for a live performance by Morgan Wallen and guests Hardy and Earnest. Tickets go on sale at 10 a.m. on Friday, Oct. 22, with an eight-ticket limit per household.

Since rising in the charts, Wallen has more than 7 billion on-demand streams, four consecutive No. 1 hits and multi-platinum certifications.

Tickets for Morgan Wallen at Simmons Bank Arena will be available on ticketmaster.com or at the arena’s box office.

UPDATE: Simmons Bank Arena announced on Oct. 19 that an additional date would be added to Morgan Wallen’s stop in Arkansas. Wallen will also be performing at the venue on Friday, Nov. 19, at 7:15 p.m.