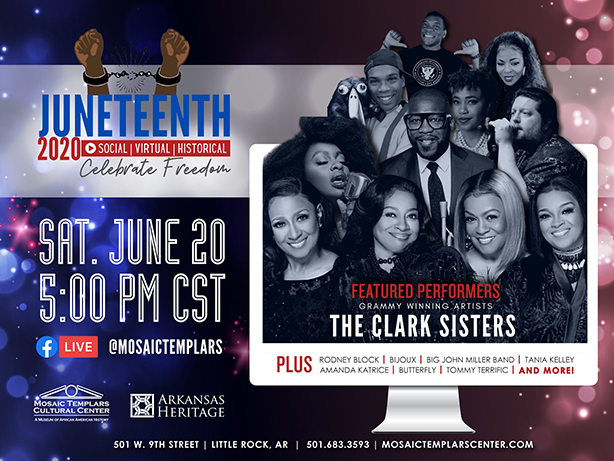 The Mosaic Templars Cultural Center (MTCC) is hosting its first-ever virtual Juneteenth celebration this Saturday, June 20, due to guidelines and restrictions put in place because of the coronavirus. Hosted free on Facebook Live, the center has developed a streaming lineup including Grammy-winning gospel group the Clark Sisters, Rodney Black, Bijoux and more than 30  other performers.

The celebration of Juneteenth is traced back to June 19, 1865 when Union troops announced slaves had been freed. Celebrating emancipation, Arkansas has honored Juneteenth since as early as 1873. In 2005, the Arkansas Senate declared the third Saturday in June as “Juneteenth Independence Day.”

“Juneteenth is important because the event historically commemorates the end of enslavement,” MTCC Director Christina Shutt told AY About You. “For us, Juneteenth is really about celebrating, honoring, embracing and learning about African American history and culture.”

Special to this year, the MTCC is inviting a number of elected officials from around the state to serve as special guest speakers at the event. Shutt noted Little Rock Mayor Frank Scott Jr. will be in attendance.

“For him to be the first popular elected African American mayor in the city and to see men and women like him blazing trails for generations to follow…that’s the kind of stuff that you’ll see and get to be a part of,” Shutt said. “It’s important for us to learn that history and also learn where we’re going in the future.”

This will be the tenth year the MTCC celebrates Juneteenth. In the past, the center has welcomed more than 5,000 people to the event. This year, Shutt expressed they are wanting to see “thousands more” at their virtual event, referencing that many have announced they were hosting watch parties.

Amidst a national movement in honor of the murder of George Floyd and standing against police brutality and systemic racial injustice, Juneteenth is garnering new attention.

“We’ve had a lot of people from outside of the state call in and ask how they can be a part of Juneteenth. In addition, we are open, so we’ve seen a steady stream of visitors,” Shutt said. “I do think that people are more interested. They’re more open to learning about the history of how things like that happen, but also learning about their own local history, learning about the first African American police officers in Arkansas, learning about the rich and vibrant stories that make Arkansas a great place to call home.”