Most Likely to Be Murdered 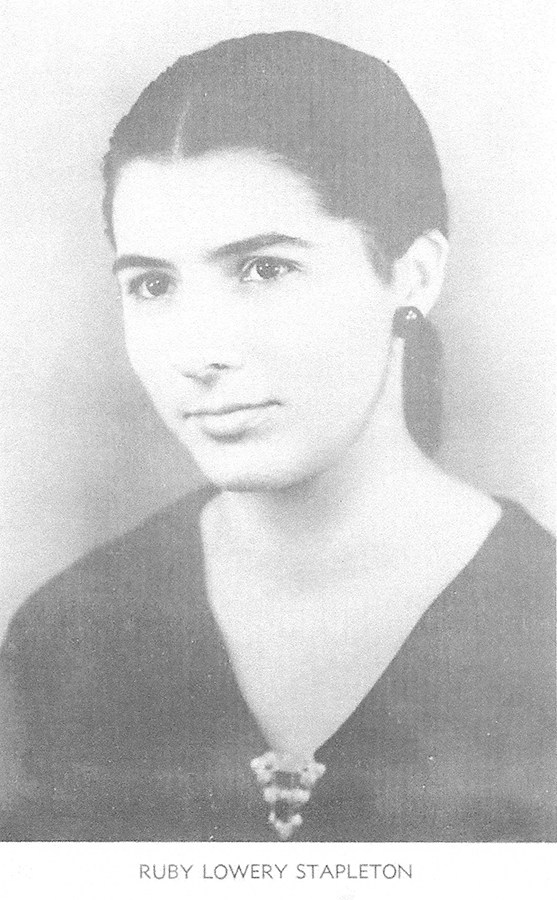 The only graduate of the Harding College class of 1926 was stylish, with her jet-black hair worn in a fashionable flapper bob under her mortarboard. Ruby Lowery’s life played out in pictures from Harding yearbooks. When she was a junior, her classmates nicknamed her Flutter and described her as “an all-around girl.” As a senior, she was editor of the yearbook. And then there is the photo of her looking as regal as an empress.
A superior student, she matriculated to the University of Oklahoma, where she received her master’s degree. She returned to Harding to teach English, and when the school moved from Morrilton to Searcy in 1934, she was in charge of coordinating the transfer. In Harding’s 1952 yearbook, she is Associate Professor Mrs. Ruby Stapleton, still a handsome woman. Finally, her last school photo appears above the words “In Memoriam.” The obituary recalls her academic accomplishments and reads in part, “Her friendly smile and genuine interest in students influenced for good thousands of young lives.” What the epitaph doesn’t say is the manner of her sudden death, which was murder.
Ruby Stapleton’s homicide was a shock to everyone at Harding College (now Harding University), an institution dedicated to higher learning within a religious atmosphere. Beloved by everyone who knew her, the Nebraska native seemed the least likely person to become a victim of violence. And yet, on Tuesday night, Oct. 8, 1963, she vanished from a washeteria in Searcy.

Harding College’s class of 1926, with Ruby Lowery Stapleton in the center.

Her laundry was still there, and her station wagon was parked outside. But there was no sign of Stapleton. When police investigated, they discovered two tire shops adjacent to the washeteria had been burglarized, but was that just a coincidence? Harding classes were dismissed the following morning to let teachers and 500 pupils (almost half the student body) help look for Mrs. Stapleton. Officials of the FBI, Arkansas State Police, the Civil Air Patrol, the White County Sheriff’s Office and the Searcy Police Department told the students to make a house-to-house canvass of the town and surrounding areas and to inspect road banks, woods and ditches. The search went on for two days, but nothing came of it. Harding offered a $1,000 reward for information that would lead to her whereabouts.
Professor Stapleton had made her home with her daughter, Mary Claire, and niece, Clarita Bartley, both students at Harding. Ruby also had a son, Glen, himself the father of two small children, including a 7-week-old baby. On the evening of her abduction, due to a malfunctioning washing machine, Glen’s mother picked up his dirty laundry and took it with hers to the washeteria.
Ruby’s spouse, Dr. Emmett Raymond “Ray” Stapleton, had been part of Harding’s faculty until he left to accept a teaching position in Superior, Wisconsin, which is where he was at the time of the crime. Upon hearing of his wife’s disappearance, he flew to Searcy the following night. Soon after, the FBI arrested two men in a drugstore in Lubbock, Texas, and charged them with wire fraud for phoning Ray Stapleton and demanding money from him. He had held them on the line for 30 minutes, long enough to notify authorities who traced the call. The extortionists were able to prove that they had been in Lubbock since October 5 and weren’t connected directly to the kidnapping.
Eleven days after the disappearance, while students were gathered in the auditorium to watch the movie Imitation of Life, Harding President Dr. George S. Benson interrupted to announce that Mrs. Stapleton’s body had been found. He didn’t go into the gruesome details, but newspapers did.
Twenty-one-year-old Jerry Bass had been hunting squirrels along Bull Creek when he saw Mrs. Stapleton’s badly decomposed, nude body on a pile of brush in a dry section of the creek bed about two miles north of Beebe. The only clothing found was a piece of the victim’s belt, which had been cut. Her attacker or attackers had forced a big wad of high-grade upholstery cotton into her mouth, probably to stifle screams for help, but the gag ended up in her throat, breaking the hyoid bone and choking her to death. She had sustained deep lacerations on her chest, according to the medical examiner, possibly a result of cutting off her clothing.
As for the tire store burglaries, White County Sheriff Jack Price said, “I don’t believe anyone would do a two-bit job like that and then do a thing like this. But it is still suspicious.”
A month or two before her murder, Ruby was chased through her house by two men who had been hiding in a coat closet. She escaped and ran to the nearby campus. Then, on the day of the abduction, Mary Claire’s friend, Deanna Mills Brooks, and Deanna’s grandfather saw Mrs. Stapleton in her station wagon at a four-way stop and tried to get her attention, but she was visibly upset and didn’t notice. Deanna’s grandfather said, “She’s angry about something. Something has happened.” The cause of her agitation may have been rumors that a bootlegger was selling liquor to Harding students.
Also, on that day, Mary Claire came home between classes to grab a bite to eat. It was during finals and she was preparing for tests. She asked if she could fix something for her mother, but Ruby was distracted. She was gazing out the picture window in the living room and was very preoccupied, looking up and down the street, as if she were expecting to see someone. When Mary Claire returned home, Ruby was gone. Due to the lateness of the hour, around 10 p.m., and the fact that a trip to the laundromat wouldn’t have taken that long, Mary Claire called the police.
A few days after Ruby’s funeral, police arrested five boys who confessed to burglarizing the tire shops, but a polygraph specialist concluded they were truthful when they denied playing a role in the kidnap/murder of Stapleton.
Whenever an adult is slain, it’s a natural inclination to suspect the spouse, and Ruby and Ray Stapleton did have an unconventional marriage. They hadn’t lived together as husband and wife for several years, but they shared a joint banking account. Shortly before her murder, Ruby sold a piece of land to the college for $26,000. Instead of putting the cash in the joint account, however, she locked it in a safe deposit box.
Ray wrote an angry letter that scared her, but she didn’t call the police or contact an attorney because to do so would have disclosed the worst-kept secret in Harding University’s history. Ray Stapleton hadn’t just left Harding; he had been asked to leave after engaging in sexual liaisons with other men. Being gay in that era was scandalous, especially considering the college’s affiliation with the Church of Christ.
But Dr. Stapleton couldn’t have killed his wife himself. He was in Wisconsin. Did he hire someone to do it? For over 50 years, that question has hung in the air. To uncover the truth would take someone as devoted to the memory of Ruby Stapleton as she had been to her alma mater.

TO BE CONTINUED: READ PART 2 »