During the Steel Horse Motorcycle Rally, join the Fort Smith Museum of History for an exhibit and a program on local and regional motorcycle history.  The exhibit will be in place on the museum’s second floor, May 2-6, featuring vintage motorcycles, photographs, artifacts and memorabilia.  A program is scheduled for Friday, May 5 and Saturday, May 6 at 1:00 pm.  Motorcycle Memories 2017 is presented in Memory of Robert Winters (November 22, 1940-June 13, 2016), Fort Smith native who gained national notoriety in the world of motorcycle racing in the 1960s.  Robert provided many of the amazing photographs featured in the exhibition. 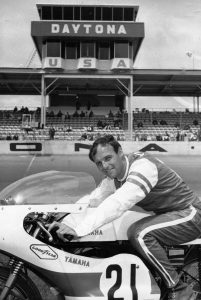 The exhibition, which was first presented in 2008, features vintage motorcycles and photographs exploring the “art of the motorcycle” in Fort Smith and the region from the 1940’s through present day. Fort Smith has an historical association with motorcycle culture. Learn about the people and places that places that put the region on the map for motorcyclists.

Quin Winters Bike shop on Towson Avenue was the nexus of motorcycle culture in Fort Smith from 1939 until 1975. His sons, Leroy and Robert Winters, gained national fame for their accomplishments in the field of motorcycle racing. In 1940, Fort Smithians Ercie Gann, Kathryn Johnson and Jean Fivekiller became charter members of the “Motor Maids,” a national organization of female motorcyclists. The annual “Razorback Run,” a one hundred fifty mile round trip ride from Fort Smith to White Rock Mountain near Mulberry, Arkansas drew motorcycle enthusiasts from a regional area from 1952 to 1955. Otis Spiker played a vital role in the area cycling culture.  As one of the few manufacturers of Henderson motorcycle parts, Spiker gained national recognition as well as becoming a local motorcycle legend.  Fort Smith native Danny Hammond raced motorcycles professionally from 1959-1969.  After retirement, Hammond raced in the Vintage Dirt Track Racing Association winning the National championships 2004-2007.  These stories and more come to life with the Motorcycle Memories exhibit and program.

Motorcycle Memories is designed to unite the “art of the motorcycle” with the generation of Americans that enjoy a lifestyle peculiar to the American mainstream.  The exhibit will strive to educate future generations about a fascinating spectrum of Americana.

This project is supported in part by a grant from the Arkansas Humanities council and the National Endowment for the Humanities.  The Fort Smith Museum of History was selected to receive proceeds from the Steel Horse Motorcycle Rally scheduled for May 5 and 6, 2017 in downtown Fort Smith, Arkansas.

The program is offered free with museum admission:  $7 adults, $5 veterans and military, $2 children, under age 6 are free.