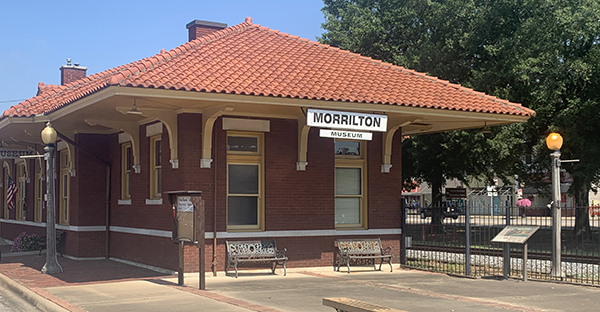 There’s only one Morrilton in the whole country. Believe it or not, this Conway County community was very nearly named Moosetown! More about that later. 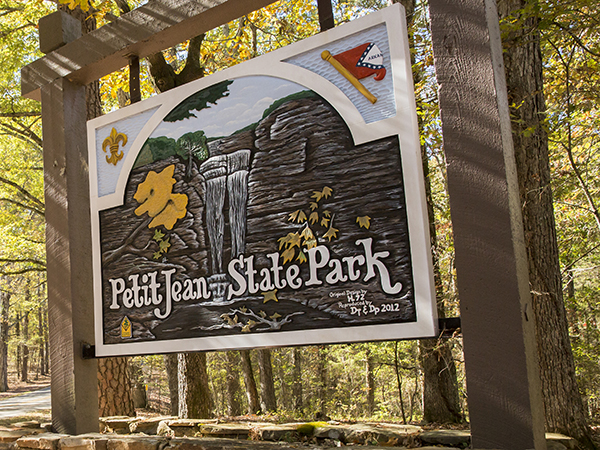 Let’s begin with some tantalizing tidbits about the fascinating municipality: It serves as the proud gateway to Arkansas’s first state park. The town is the home of one of the state’s most truly unique manufacturing operations. A local business produces the official ham and bacon of the Arkansas Razorbacks. One of America’s preeminent historians was a graduate of Morrilton High School. And Morrilton’s past includes one of the most notable political dynasties in the South.

Morrilton’s history can be traced back to Lewisburg, a steamboat landing on the Arkansas River that was first settled almost 200 years ago in 1825. Located about 50 miles upstream from Little Rock on the north bank of the river, the trading post was named after its founder, Stephen D. Lewis, and was a bustling town for decades, eventually claiming almost 2,000 residents. Some 80 businesses attended to the needs of the vibrant society, to include an assortment of stores, several saloons, a couple of hotels, two sawmills, a pair of gristmills, a flour mill, a cotton gin and an opera house. Lewisburg served as the Conway County seat from 1831 through 1850 (temporarily losing the distinction to Springfield) and then again from 1873 until 1883. 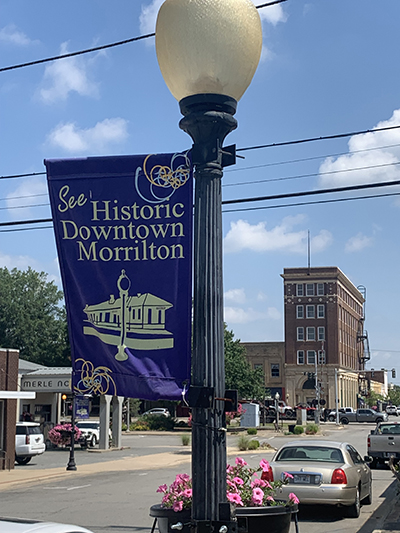 Progress did in Lewisburg. When the principals of the Little Rock and Fort Smith Railroad began surveying a route paralleling the Arkansas River, they asked the leaders in Lewisburg for a financial contribution to help offset the costs of construction. This was right after the Civil War, and Lewisburg and its citizens were in bad financial shape. They declined. Two prominent businessmen, Edward Henry Morrill and James Miles Moose, stepped up and donated a tract of land about a mile north of Lewisburg for the new depot. Legend has it that the railroad’s first station agent flipped a coin to determine the town’s name. Morrillton (eventually becoming Morrilton) won the toss over Moosetown. People and businesses slowly migrated from Lewisburg to the new site, and Morrilton assumed the role of Conway County seat in 1883. Over the years, Lewisburg gradually disappeared and all that’s left now are a few crumbling foundations.

It should be no surprise that Morrilton is chock full of significant buildings, with nearly two dozen structures listed on the National Register of Historic Places. The Conway County Library (101 W. Church St.) is one of two “Carnegie Libraries” still operating in the state. The Pathfinder Club, a local women’s organization that had accumulated a 1,600-volume collection of rare books from around the world, received a $10,000 Carnegie grant in late 1915 for a new library, and the imposing building was opened almost exactly one year later. Constructed of red brick and topped with a heavy, red tile roof, it still retains the original windows. A block or two away is the Conway County Courthouse (117 S. Moose St.), a handsome two-and-a-half story classical revival example dating from 1929-1930. 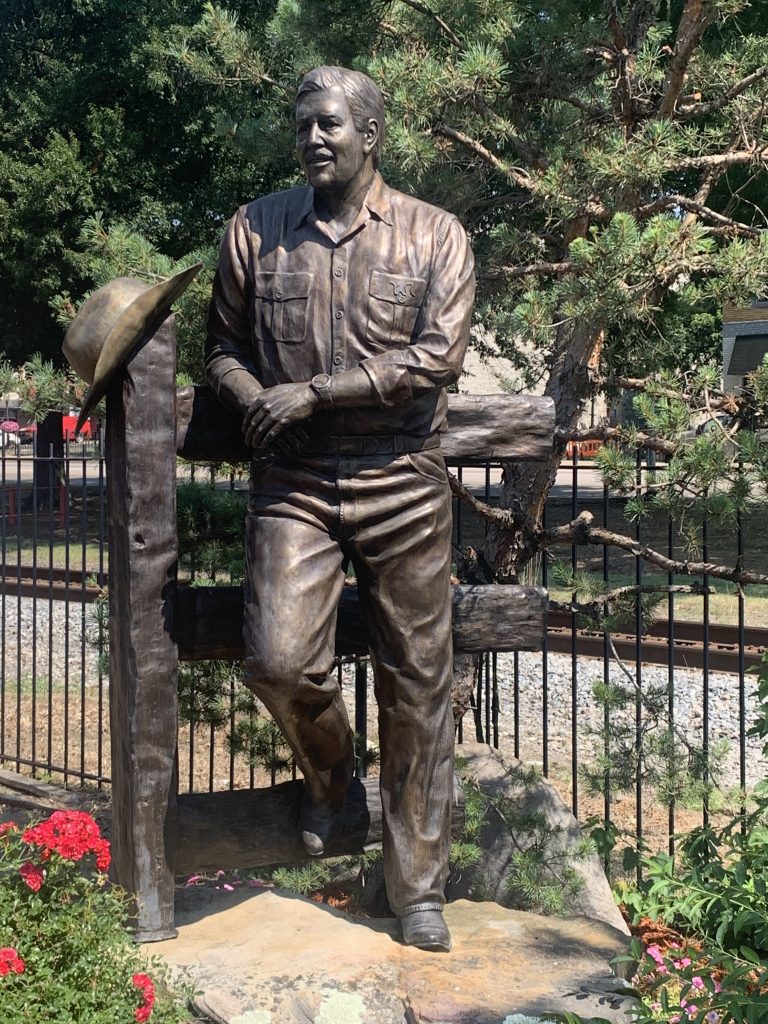 The restored Morrilton Railroad Station (on the tracks between Division and Moose streets) is home to the Morrilton Depot Museum and Genealogy Research Library. Open to the public from 10 a.m. through 2 p.m. on Fridays and Saturdays, it houses a display of Native American artifacts, Civil War items and exhibits on early life in Conway County. Standing outside the building is a fine statue of former Gov. Winthrop Rockefeller, who spent many years southwest of town at his ranch atop Petit Jean Mountain. Rockefeller made numerous lasting contributions to Morrilton, one of which was providing funds for Reynolds Elementary School, the latest in education and design in that era. And it was during his time on the Arkansas Industrial Development Commission that Rockefeller helped persuade Green Bay Packaging Company to locate a large mill outside Morrilton, a project that ultimately employed many area residents. 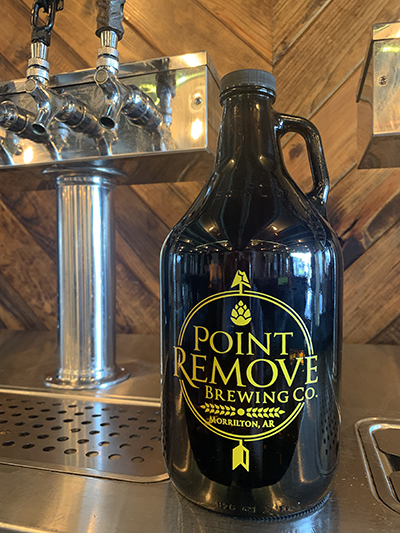 Another historic building, the old Coca-Cola Bottling Plant (102 S. Crestliner St.), has undergone a major transformation: conversion into the Point Remove Brewing Company. Named after a creek that flows out of the Ozark foothills and into the Arkansas River near Morrilton, the brewery offers pizza, wine, a charcuterie board featuring a selection of Petit Jean meats and of course, a nice variety of craft beers. Three that you’ll want to sample include the Petit Jean Pilsner, the Conway County Cream Ale, and the Motown IPA (honoring the locals’ affectionate nickname for their beloved hometown). 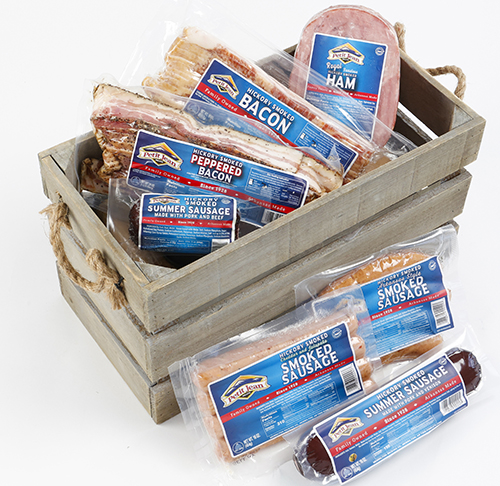 Petit Jean Meats is a big deal in Morrilton and has been for nearly a century now. Felix Schlosser, a German butcher, immigrated in 1922 to Little Rock, where he lived for several years before moving to Morrilton in 1926 and opening a small meat market. The young sons of a cousin began working in the business and were instrumental in its evolution to the Morrilton Packing Company. In fact, that family — the Ruffs — now can claim four generations with the firm. In addition to its line of Petit Jean bacon, ham and sausage, the company’s 75 employees produce over 100 other products to include many private label items. And, of course, Petit Jean Meats has been an official sponsor of the Arkansas Razorbacks for nearly two decades.

Another big deal in Morrilton is the Rosewood Classic Coach firm. Richard Neal, a fourth-generation funeral director and embalmer from Brinkley, moved to Morrilton in 1988 to run a funeral home his family had purchased. A self-described car nut, Neal was always on the lookout for a “purpose built” funeral car, one carefully planned and manufactured to meet the unique needs of his industry. He found a like-minded individual in Max Prinzing, a Minnesota entrepreneur who was building one-of-a-kind classic cars. Together, they created a custom hearse incorporating a timeless design.

Neal then acquired Prinzing’s company and brought it down to Morrilton, where its 27 employees create 20 to 22 units a year — and all are sold before they’re built. Soon to produce his 100th vehicle, Neal hopes to be manufacturing 48 hearses annually in the near future. Although many of his coaches wind up in the northeast, where the population density is higher, they can be found across the United States and in Australia, Colombia, Trinidad and even Nigeria. (Neal admits to some apprehension that this particular order was a scam, but it proved to be on the up-and-up).

Given the expectations of his clients, it’s no surprise that Neal is selective in who he hires to produce these extraordinary vehicles. His employees generally come to him with extensive body shop and hot rod shop experience. Under the handcrafted exteriors are General Motors products, making the vehicles easily serviceable. Power is provided by 430-horsepower performance engines coupled with 4-speed automatic transmissions.

These beautiful vehicles have caused some unanticipated problems, however. On occasion, drivers have been swarmed by curious onlookers, almost delaying their arrival at services. And Neal says it’s not uncommon for the clergy to have trouble luring friends and family of the deceased from the hearses to the funeral tents.

Morrilton Mayor Allen Lipsmeyer, now in his seventh year on the job, is especially appreciative of Morrilton Packing, Rosewood Coach and the other family-owned, privately held companies in town. “This core group is constantly contributing to our community,” he says. “They’re the ones who helped Morrilton recover from 1999 when the city lost 2,000 jobs.” That was the year when Levi Strauss & Company and Crompton Mills closed their factories in town.

When asked about projects in the works, Mayor Lipsmeyer mentions that the city is remodeling a bowling alley/skating rink that’s been closed for the past 13 years. The renovation of the eyesore will provide a great outlet for Morrilton’s kids. This redevelopment is a small part of the $800 million reinvestment in the town in recent years. “It’s our turn to grow,” Lipsmeyer says.

As you can imagine, Stephanie Lipsmeyer, interim director of the Morrilton Chamber of Commerce and wife of the mayor, is proud of her community, noting that during the pandemic, the city’s sales tax revenues “were off the chart,” as folks made a point of shopping local. And she’s excited about the Waylon Holyfield Place, an outdoor, multi-use facility now in the planning stages for the downtown area. Named in honor of Holyfield, the Conway County native who’s written songs for many of Nashville’s top country music stars, the new venue will be perfect for concerts, special events and a farmers market. Additionally, Morrilton is on the narrow “blue line” for the 2024 solar eclipse, and Lipsmeyer feels confident the site will be ready for the crowds expected to converge for the rare celestial occurrence. 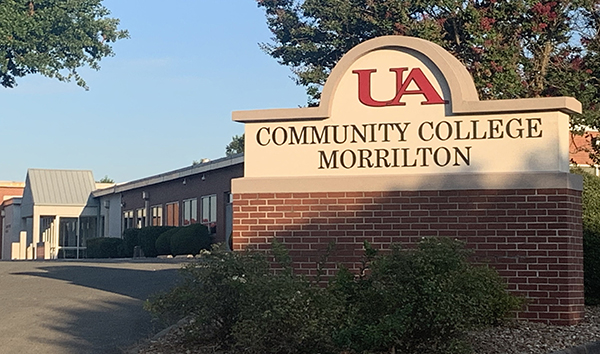 Another advocate for the community is Lisa Willenberg, chancellor of the University of Arkansas Community College at Morrilton. Now in her 27th year with the institution, she and 180 of her fellow faculty/staff members offer two dozen degree programs for their 2,000 students each semester. After receiving their two-year associates degrees, those who wish to continue their education are eligible to transfer to the University of Arkansas at the same tuition rate, giving them a major financial break. Two-year degrees in surveying, petroleum technology, cybersecurity, welding, industrial mechanics, and directional drilling are increasingly popular, and a new RN program allowing a seamless transition to the University of Arkansas for Medical Sciences is expected to garner lots of interest as well.

Wine enthusiasts should consider a visit to Movie House Winery (99 Sandtown Road; open Thursday through Saturday from noon to 6 p.m. and Sunday from noon to 4 p.m.) Originally housed in the historic Petit Jean Theater in downtown Morrilton, owners Ken and Sherrie Sowers relocated the business to their farm on the southeastern side of town. Offering an interesting selection of varieties, they also sell wine-themed gifts and wine-making supplies.

The Pulitzer Prize-winning historian from Morrilton was Dr. C. Vann Woodward, a distinguished professor of history at Yale University in New Haven, Connecticut. And the political dynasty that was mentioned earlier was a reference to Marlin Hawkins and his storied 38-year career in government service, much of it spent as the Conway County Sheriff and Collector. His 1991 autobiography, How I Stole Elections, is a classic work in Arkansas politics.

As for that flagship state park, it’s Petit Jean, located some 15 miles southwest of town and across the river on Arkansas Highway 154. With its historic CCC lodge and cabins, campgrounds, trails, interpretive programs and other features, the park is among the most popular in Arkansas, attracting hundreds of thousands of visitors a year (free admission). In that same neighborhood is another favorite destination, the Museum of Automobiles and its collection of 50+ vehicles (to include the only known remaining Climber, an Arkansas-made car dating from 1923, and Gov. Winthrop Rockefeller’s 1951 Cadillac). Admission costs are $10 for adults; $9 for seniors; $5 for students; and children under 6 free.

Central Arkansas residents planning a visit to Morrilton might consider going the back way, driving west on Arkansas Highway 10 and then north on Arkansas 9. It’s much less stressful than the typical route via Interstate 40, plus you’ll have the option of interesting side trips to places such as Lake Sylvia and the Flatside Wilderness in the Ouachita National Forest and Heifer Ranch near Perryville. In short, a road trip to Morrilton provides yet another chance to enjoy The Natural State!