Mount Ida: A Little Gem of the Ouachitas 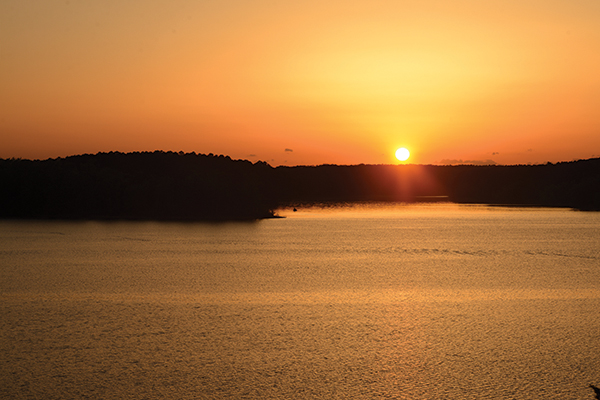 Mount Ida: A Little Gem of the Ouachitas

Mount Ida, located about 40 miles beyond Hot Springs in west-central Arkansas, is one of the state’s smallest county seats with a population of some 1,076 kind souls. But this center of commerce for Montgomery County swings far above its weight.

Let’s start with history. Granville Whittington, the man who founded the town 185 years ago, opened a general store a short distance north of Mount Ida’s present location soon after moving to the Arkansas Territory from Massachusetts. An interesting aside is the fact that Whittington also served as secretary of the group of men that met in 1835 to formally petition Congress to grant statehood to Arkansas, an objective that was met a year later. 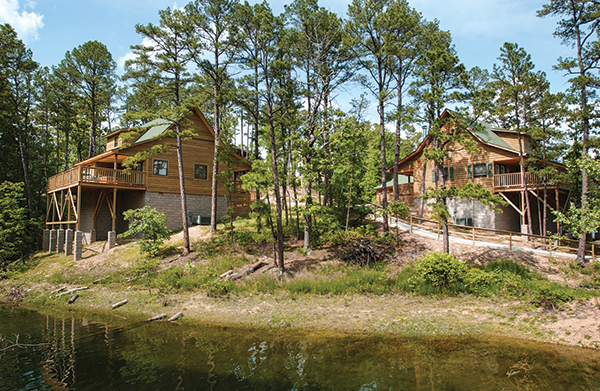 Originally known as Montgomery, the town was also called Salem for a while before it became Mount Ida in 1850. Legend has it that Whittington suggested the name, saying that the surrounding countryside reminded him of a Mount Ida near Boston where he had lived as a young man. Back in those early days, livestock and timber were mainstays in the community’s economy.

Mount Ida is nicely situated, perched on the banks of the South Fork of the Ouachita River and surrounded by hillsides covered with pines and hardwoods. In fact, about 85 percent of Montgomery County is included in the Ouachita National Forest. And Arkansas’ largest body of water, Lake Ouachita with its 975 miles of shoreline, is located about halfway between Mount Ida and Hot Springs.

This fortuitous combination of woods and water has made Mount Ida a recreational haven, popular with an ever-growing legion of outdoor enthusiasts. Anglers have been plying the clear, deep waters of nearby Lake Ouachita since its creation in 1952. Several state fishing records have been set on the lake over the years, to include the current best for channel catfish (38 pounds). Likewise, the upper Ouachita River, flowing north and west of the town, is known for smallmouth, spotted and white bass. 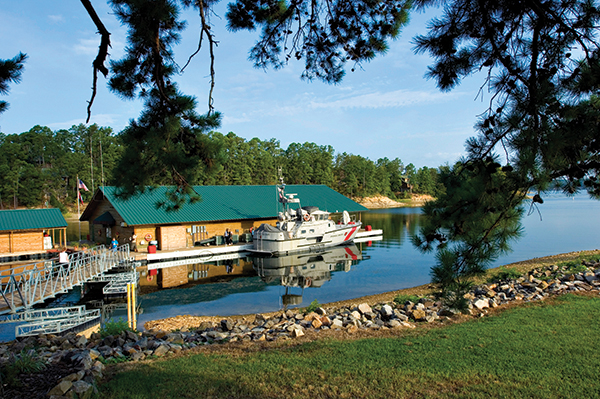 Boaters have also found the Mount Ida area to their liking. Party barges, sailboats, jet skis, houseboats, paddleboards and runabouts skim across the lake, while canoeists and kayakers head for the river.

Hunters, too, have discovered the region. Not just those seeking wild game, but also a different sort of hunter looking for a special something with supposed metaphysical powers — brilliant quartz crystals. Mount Ida’s slogan of “Quartz Crystal Capital of the World” is right on the mark, with half a dozen or so mining operations near the town. For a modest fee, customers can dig for their own crystals, but should be warned that it can be a dirty undertaking. For those inclined to stay clean, a staggering selection of beautiful specimens can be found in local gift shops. And for the visitor truly interested in a memorable quartz experience, plan on attending the annual “Quartz, Quiltz, and Craftz Festival” this fall, assuming that our COVID crisis has improved by then.

What’s been truly amazing in recent years is the growth of trails in the area — trails not only for hikers but also for mountain bikers. The Womble Trail, a 37-mile single-track path winding through the Ouachita National Forest, is open to hikers and bikers, but closed to horseback traffic. In places, it meanders along bluffs overlooking the Ouachita River, supplying visitors with compelling photo ops. That the International Mountain Biking Association (IMBA) has designated the Womble Trail as an “Epic Trail” is a testament to its beauty and significance.

Another outstanding recreational resource near Mount Ida that’s gotten lots of attention is the Lake Ouachita Vista Trail (affectionately referred to as “LOViT). Also recognized by IMBA as an “Epic Trail,” the LOViT is a challenging 47-mile path for hikers and mountain bikers stretching along the south side of Lake Ouachita. Built over the past decade by an ambitious group of dedicated volunteers known as the “Traildogs,” the trail dips into deep, lush valleys of old growth timber and then climbs onto the rocky ridgelines of mountains towering over the lake. Stunning views of dozens of islands scattered across the 40,000 acres of sparkling water yield a rich payoff to those up for something a bit out of the ordinary. At least a dozen trailheads have been established along the route, providing convenient access to all levels of users.

Given the abundance of recreational opportunities in the area, it’s no surprise that several full-service resorts have been developed to serve tourists. One of the oldest is Mountain Harbor, a picturesque retreat nestled on the southwestern shores of Lake Ouachita. Dating from 1954, Mountain Harbor is among the top resorts in the South, offering a wide range of lodging options (rustic to luxurious), a restaurant, marina and a spa. Bill Barnes, whose father, Hal, founded the resort, has been working on the property for well over 50 years now, starting out as a dishwasher. He’s proud of the relationship between the resort and Mount Ida, noting that several generations of the community’s residents have worked at Mountain Harbor throughout the years. “The people in Mount Ida are warm and friendly,” Barnes says, “sharing a wonderful, classic slice of small-town America.” He points out that the Mount Ida area is an interesting blend of native Montgomery County residents combined with an influx of people who’ve fallen in love with the region and relocated there. “There’s not a traffic light in the entire county,” Barnes adds. 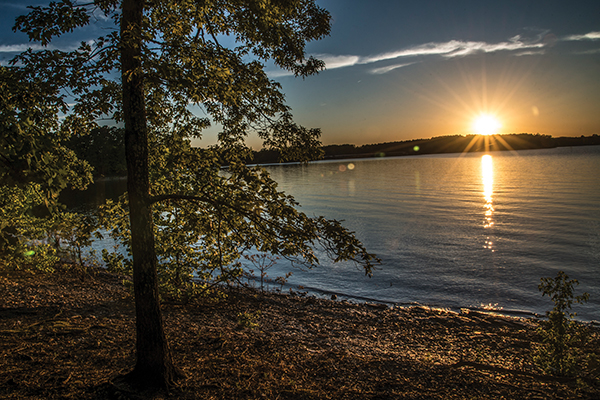 A sunset on Lake Ouachita.

A couple of miles to the west of Mountain Harbor is another top-quality resort — Shangri-La. It also offers a wide range of lake-oriented lodging and activities but has something that even Barnes strongly recommends: the homemade pies of Mrs. Varine Carr. Now into her second half-century of baking pies, Carr has perfected her culinary skills, so much so that those in the know make sure to arrive early before all the pieces have been sold. Her specialties include chocolate, coconut, Dutch apple, cherry, peach and blueberry. Go ahead and splurge, and ask for a dollop of ice cream with your order.

Mayor Jo Childress is also a big fan of Carr’s pies (and in case you’re wondering, her personal favorite is the coconut). And the mayor should know a thing or two about Mount Ida, now that she’s entering her 16th year in office. “It’s been a challenging job,” she says, “but very rewarding. For every person who’s ready to tie me up and ruffle my feathers, there are nine that feel the other way.” That’s a ratio that most politicians would envy. 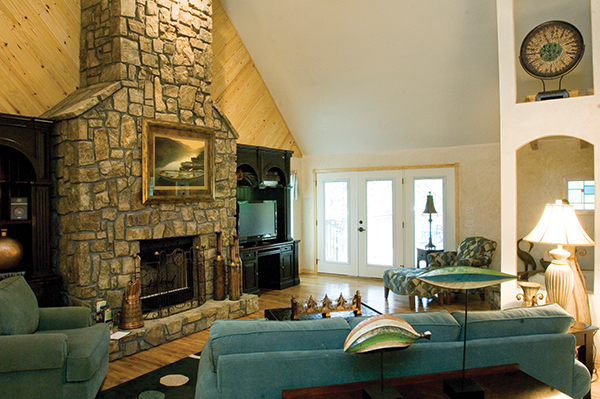 Childress also recommends the Heritage House Museum of Montgomery County for visitors, and the Front Porch Stage, a music venue located on the courthouse grounds where live performances can be enjoyed, much like the traditional jam sessions seen up in Mountain View (schedule still undetermined at this time due to the pandemic). She notes that Mount Ida has a long history of welcoming tourists. “We may be a small town,” the mayor says, “but everyone will quickly notice how friendly all of us are.” 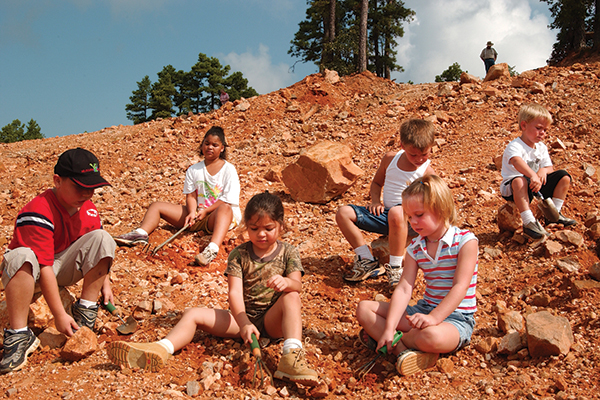 Ever the politician, Mayor Childress reminds me about a couple of other spots in town for tasty desserts. The Mount Ida Café is another destination for lovers of homemade pies. And a few blocks away is the Dairyette, one of Arkansas’ oldest remaining drive-ins.

Some AY readers may fondly recall the Lum and Abner radio show. About 20 miles west of Mount Ida on Arkansas Highway 88 is the Lum and Abner Museum and Jot ‘Em Down Store in Pine Ridge. Located in a pair of old general stores, this fascinating collection of historical radio memorabilia is also worth a visit. 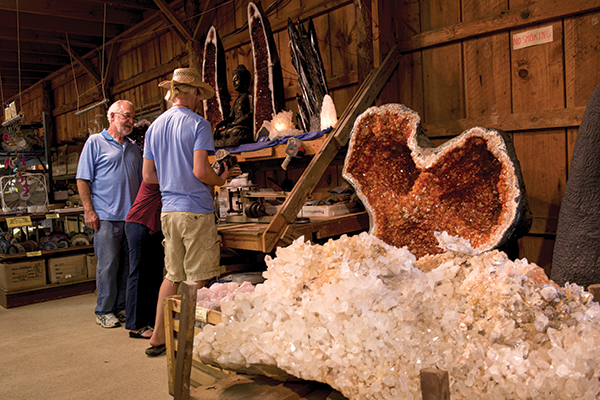