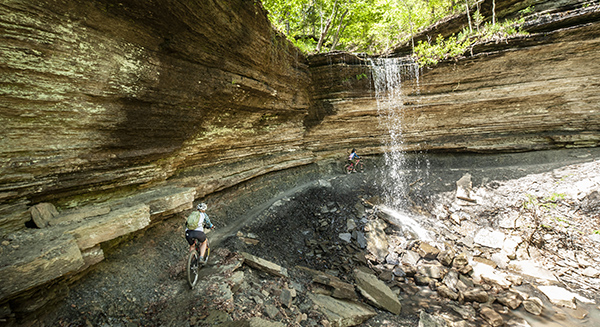 Search “mountain biking capital of the world” on Google. What do you get? Not Moab or Park City, Utah. Not Lake Tahoe, California. And not even Crested Butte, Colorado.

It’s Bentonville, Arkansas. And, for those who have spent any time there in the last few years, they know it’s all of Northwest Arkansas that can claim some ownership in the stratospheric rise of biking culture and all that comes with it.

For someone who has returned to the region after some time away, you can be forgiven for thinking the Northwest Arkansas mountain biking culture sprang up seemingly overnight. But ask a local — one who’s been around a little bit longer — and they’ll tell you that this scene dates back to at least the 1980s when the state hosted its first festival for the sport at Devil’s Den State Park. Hidden Diversity Trail opened in Rogers in 2006, well before folks were flying in from states away with bikes in tow. The better-known Slaughter Pen trail opened a year later. 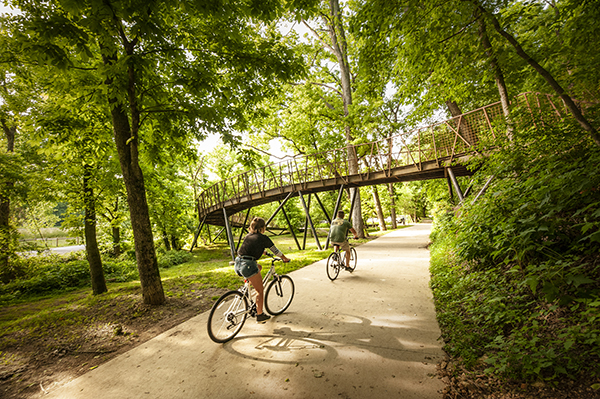 And every day since, the culture and the opportunities that come with it seem to grow by the mile.

But what does it take to make a place Disney World for mountain bikers?

Trails, sure. They’re there. Infrastructure, of course. And that requires money to invest, of which local benefactors have plenty. The sheer jaw-dropping beauty of the region helps, too.

“The natural beauty of this state is one of the most valuable, and probably underutilized, resources this state has,” Steuart Walton said on a recent episode of the Startup Junkies Podcast. Walton is the grandson of Walmart founder Sam Walton, and he’s also the co-founder of Runway Group, a holding company that invests in real estate, hospitality and other businesses in Northwest Arkansas. An outdoorsman and biker himself, he and his brother, Tom, have done a great deal of work to make the region what it is today.

“People associate us with mountain biking and bike trails, but to me, it’s a lot bigger than that,” he says. “It’s all about providing access to the outdoors. Arkansas is probably the most underappreciated state in the country in terms of natural beauty, and it’s because it’s spectacular. … It touches the soul.” 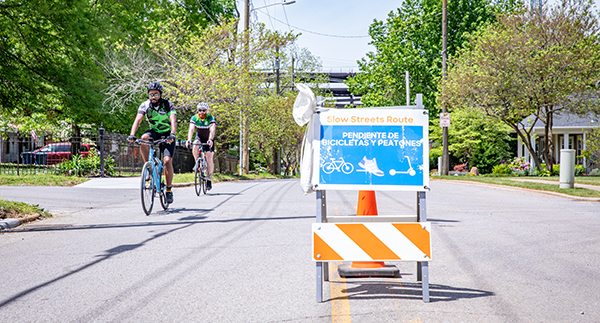 But what sets Northwest Arkansas apart from many other destinations, according to those who live there, is the accessibility. According to them, that’s a story that needs to be told.

“Northwest Arkansas has made cycling extremely accessible and is continuing to do that for more and more of our surrounding communities,” Scotti Lechuga says. Last year, Lechuga and her husband Ernie — both former UCI Pro Road cyclists — opened Natural State Rock & Republic, a multifaceted retreat and lodging facility that provides courses, expeditions, rentals and more.

Ernie is the former Mexican U23 Time Trial Champion, and Scotti competed in Women’s World Tour races like Tour Down Under, Amgen Tour of California, the Giro, and the women’s Tour de France on the Champs Elysees. Scotti and Ernie won the pairs 2019 Silk Road Mountain Race and hold the pair’s record for the Arkansas High Country 1,030-mile route in 4 days 20 hours. They brought their years-worth of knowledge and experience to Springdale to share with anyone interested in the sport, from beginner to pro.

“The opportunity to find trails, people to ride with, groups of similar interest, it’s everywhere,” Scotti says. “Whether you’re just getting started, turning pro, or looking for a place your kid can ride safely, it’s here. We brought our cycling and endurance sports coaching business here about a year ago, and we’ve been so touched by the support of our community upon landing here.” 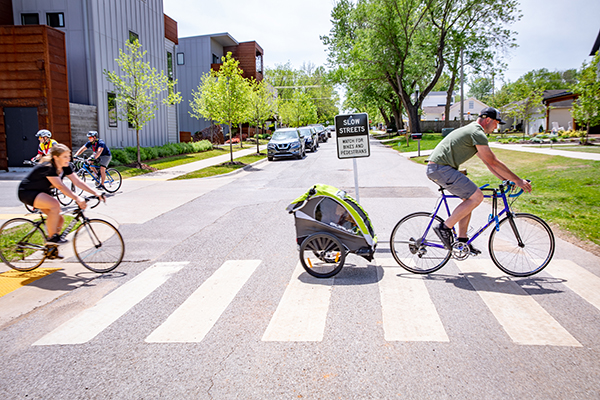 While places like Moab and Park City indeed boast some of the best places to ride in the country, Northwest Arkansas offers visitors and locals alike a chance to dip their toes in the water, to learn and to experience. And a big reason behind that accessibility is the investment in infrastructure.

“You can bandy around phrases like, ‘Colorado of the Heartland,’ and embrace these more outdoor lifestyle companies and locales. … I think Arkansas has all the real opportunity to become a state like that,” Walton says. “If you’re going to get people out into nature, besides having the good story there about why they should, is that you’ve got to have good infrastructure out there so that it’s not too hard.

“If you have to have all this gear, special books, secret trails and all this stuff that takes all this work, you are inevitably going to have fewer and fewer people that are going to put forth the effort to go out and experience it,” he adds. “You have to have onramps to these activities and in an environmentally sensitive way.”

Walton’s work through Runway Group has done just that. The organization has invested heavily in developing vast trail systems, preserving green space through parks and connecting communities through nature. The group has invested both individually and through partnerships in projects like Coler Mountain Bike Preserve, Monument Trails, Kessler Mountain, OZ Trails, Osage Park and many more.

“I think the Ozarks, given their geographic proximity — the Ozarks and the Ouachitas are the most isolated ranges in the United States — you have to invest in the narrative, the infrastructure and make it accessible,” Walton says. 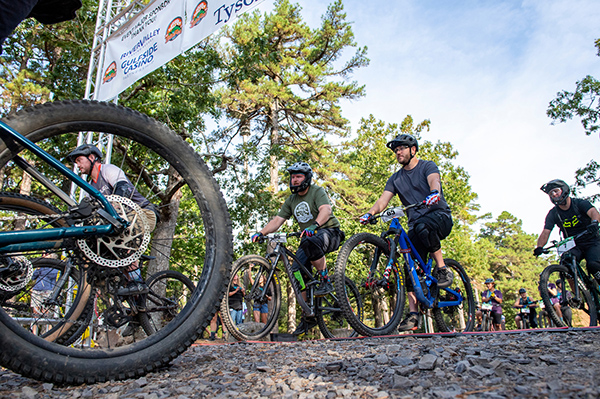 That work has helped make the sport accessible, physically, to more and more enthusiasts and newbies. But a great deal of work continues to make the biking culture as welcoming to all as it is accessible. That story needs to be told, too.

And that’s precisely what Victoria Smith is doing. Smith is an executive at Resplendent Hospitality, a PR firm with roots in both Austin, Texas, and Fayetteville. She serves clients like ETHIC, a nonprofit that launched in 2021 with the merger of NWA Trailblazers — an organization that has developed 300-plus miles of multi-use trails, including the OZ Trails network — and BikeNWA, a bicycle advocacy and education-focused organization.

Last spring, she began working with ETHIC on their Slow Streets NWA program, an effort dedicated to advocating for safer places for people to walk, bike and explore their cities for recreation and transportation. Soon after, she helped the organization launch the inaugural Critical Mass Summit, a two-day summit designed to empower and connect women and other underrepresented genders — which includes cis women, trans women, women of color, the non-binary community, and those who are otherwise marginalized — with the trails, cycling and active transportation community.

During that time, Smith says she has seen interest in biking compound, and that’s thanks in part to grassroots work to bring the sport to those who might otherwise have been left behind.

“BikePOC has been instrumental in getting BIPOC and other marginalized peoples to explore cycling,” Smith says. “Pedal It Forward NWA is getting bikes to people in need. They’re like Oprah: ‘You get a bike, and you get a bike!’ So much good work to get people on bikes. Women of Oz has been instrumental in getting women on mountain bikes and creating an inclusive community for women cyclists.”

But that hard work got even more complicated last year when legislation passed in Little Rock caught the attention of both the national and international cycling communities.

“During the spring of 2021, Arkansas passed anti-transgender legislation that stirred cyclists around the nation, with many cyclists calling for boycotts of Arkansas and its events,” she says.

The move threatened to put a spoke in the wheel of the Cyclocross World Cup event in October 2021 and the 2022 Cyclocross World Championships, both of which were to be held at Centennial Park in Fayetteville. For those unfamiliar with the sport, the latter of those two events is considered the Super Bowl of cycling, drawing in competitors and fans by the masses from dozens of countries across the globe. Advertised as, “The World Comes to Fayetteville,” it was only the second time in the 72-year history of the event that it was to be held in the United States.

But rather than let the measure stop their momentum and halt a massive, world-class event, those working at the grassroots level in Northwest Arkansas took the opportunity to zero in on the work that still needed to be done. They leveraged that national and international attention to shine a light on that work.

“Along with strife and frustration, this brought a time of awareness and unity within the local cycling scene of Northwest Arkansas,” Smith says. “BikeNWA held Pass the Mic: LGBTQIA+ in NWA and the Cycling Community on Oct. 12, 2021, and brought in experts, athletes and community members for a panel discussion. Conversations like this, on and off the bike that had previously never been discussed much, happened regularly around the community.”

Smith and her colleagues at Resplendent continue to amplify these conversations in hopes of bringing more people into what they hope to be a big tent culture.

“We are looking forward to year two of the Critical Mass Summit and continuing our partnership with the great folks at ETHIC,” says Mary Mickel, co-founder of Resplendent Hospitality. “This community is rife with incredible humans looking to propel this movement. And because we actually live here and our office cycles — at varying levels — we’re here for it.”

As that movement continues to grow, so too do the opportunities for those, like Lechuga, who have made cycling culture the center of their life’s work. With every new mile of trail and every new person going out for their first ride, there’s a tangible impact on the local economy. 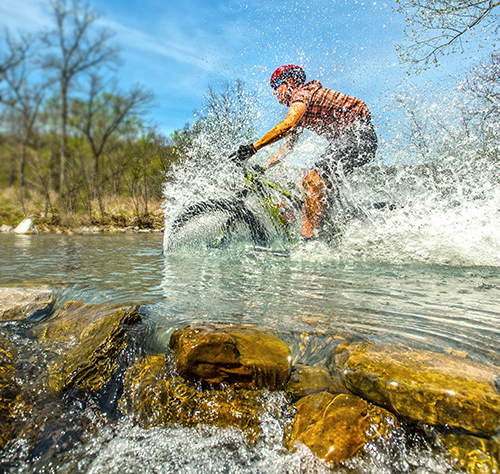 “In my opinion, it will have a positive impact within the local economy,” Lechuga says. “Healthy people are happier, live longer, explore more and give back more within their communities. No one can argue against cycling being a good thing for people to do, so with the increasing infrastructure of cycling throughout our communities, my hope is that it will continue to get people out to local breweries, restaurants, state parks, coffee shops — everyone benefits.”

She knows that as well as anyone because she’s seen it first-hand.

“We’ve been so touched by the support of our community upon landing here,” Lechuga adds. “We’ve had other small businesses and entities collaborate with us immediately, which is unique to this area. Everyone pulls for others’ success here, and in that sense, the rising tide raises all the boats. Our coaching business has definitely grown since we transitioned here.”

That type of bubbling economic activity not only bolsters local hospitality businesses but also draws in scalable ventures and spurs innovation and technology that can use the region as a testbed or launching pad. And not just apps or websites with maps and trail conditions, but new products and advancements to existing ones that net big bucks from cyclists with disposable income eager to spend on their favorite pastime.

“Technology is so much more than apps on a phone,” Walton says. “If you look at mountain bikes from 10 years ago compared to the mountain bikes of today, they’re prehistoric. … They were good, but the ones today are multiple factors better in terms of the ride, the suspension.