Murder Mystery: A River Gave Up Its Secret 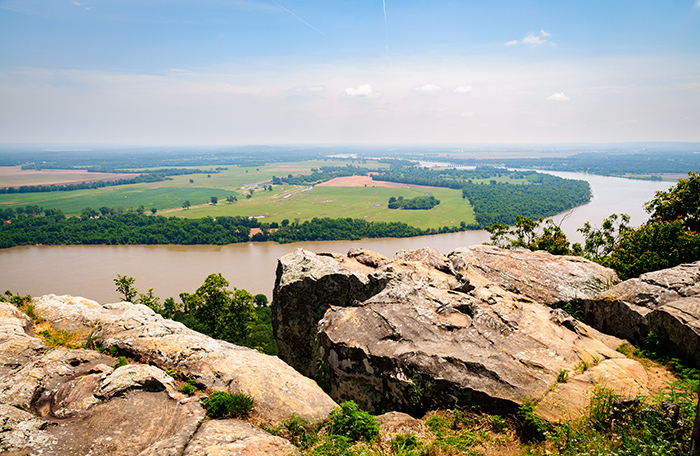 In October 2001, Morrilton authorities were doing aerial searches for cars they believed were sunk in the Arkansas River. A group of men had been reporting the cars stolen and then collecting the insurance money. Searching farther south, the police located a car submerged in the water about 200 feet out from the Cypress Creek boat dock on the Perry County side of the river. When divers and a wrecker pulled the car out, it was covered with several inches of mud, indicating the vehicle had been down there for a long time. After getting it on land, they popped the trunk and made a grisly discovery: Inside were human skeletal remains.

The Morrilton officers notified Perry County deputies, who ran a check on the 1989 Hyundai and learned it belonged to Sanford L. Jones, a Conway man reported missing by his wife on August 30, 1995. The skeleton was in remnants of clothing that matched what Jones was last seen wearing, and his ID card was also in the car. Perry County then turned the crime scene over to the Faulkner County Sheriff’s Office, and after the medical examiner found a bullet hole in the back of the dead man’s skull, a missing person’s case became a homicide investigation.

Jones was 32 years old at the time of his disappearance and was a long-time employee of Virco Manufacturing Corporation, where his father also had worked for many years. Sanford enjoyed taking pictures and studied photography briefly at the University of Central Arkansas. He had two children, Faberge and Trayvon, two brothers and one sister. He was experiencing marital problems at the time of his disappearance, but he adored his son and daughter. His father died in 2010, but his mother, Elvira Jones, still lives in Conway.

When the wrecker pulled the Hyundai from the river, more than $2,000 was still intact in the glove compartment. Sanford’s mother said the money was awarded to him in a lawsuit he had filed after a car accident.

“A policeman rear-ended him as he was trying to cross the railroad track coming from Virco,” Elvira says. “To celebrate winning the lawsuit, he bought a fish dinner for all his friends at work. I thought everybody loved Sanford.”

But even a loving father and son can have enemies. Sometime before he vanished, Sanford confided in his mother that he had received a death threat.

“Sanford told me that a boy from Perry County had come up behind him down at Virco, put a pistol up to his head and accused him of being with a girl who was going to school at UCA. Sanford told him, ‘I don’t want that woman,’” Elvira says, adding that it was the other way around, that the girl had been chasing after Sanford. Although she doesn’t think the boy with the gun was Sanford’s killer, she wonders if he may have been in on it. She couldn’t figure out why Sanford would have been in Perry County.

On the day he went missing, Sanford dropped his daughter off at a daycare center, picked up the lawsuit check at his attorney’s office, cashed the check, and went to his mother’s house. She remembers the last time she saw her son as well as if it had happened yesterday.

“He came here to my house. He came here every day before he’d go to work because he got his mail here, and sometimes he’d eat his dinner. He started talking to me, and he started crying and said his wife told him that she was going to put him out and take him for everything he had. He said he told her ‘You don’t have to do that. I’ll leave and give you everything I got.’ That’s the last conversation I had with him.”

After visiting with his mother, he went to work as usual. His shift ended at 11:30 p.m., and then he drove off into the night. He didn’t pick up his paycheck the next day, and if it hadn’t been for some guys sinking cars for the insurance money, no one would ever have known his fate.

Rivers are convenient places for killers who are looking for somewhere to dump the bodies of their victims. So many corpses have been pulled from New York City’s Hudson and East Rivers that it has become a cliché in movie plots. The Arkansas River has been used for such a purpose, too.

Shequenia Burnett and her friend, Terkessa Wallace, had been listed as missing for nearly two years until December 2015, when a fisherman pulled a human leg out of the Arkansas River. DNA testing proved it was Burnett’s limb.

In 1936, Charles Haney killed Essie McCloister and shoved her mutilated body from his wheelbarrow into the Arkansas River off South Olive Street in North Little Rock.

Even before Arkansas became a state, the river was used to wash away dirty deeds. Naturalist and explorer Thomas Nuttall encountered a man suspected of decapitating two travelers and throwing their headless bodies into the water.

On the day the river gave up her son’s car, Elvira was at work.

“When I got home,” she says, “The State Police were here at my house and told me they had found his body.”

She says Sanford was intending to change jobs. He told her, “Mama, I’ll be back in seven years, so don’t worry about me.”

A person may be presumed dead if he or she has been missing for seven years. With his life in danger, could he have been planning on dropping out of sight? Rumors circulated that he was dating the wife of a wealthy Conway man, and his mother was under the impression that the lawmen suspected the jealous husband. She expressed her opinion that the prominence and clout of the rich man may have influenced the investigation of Sanford’s murder, saying, “I think they got scared and just quit.”

But members of the Criminal Investigation Division of the current Faulkner County Sheriff’s Office have not forgotten Sanford. Sergeant Kent Hill still talks to Sanford’s mother on occasion and has a picture of her son on a wall in his office. Investigators have interviewed several people over the years, but by the time Jones’ body was pulled from the river, water and sediment had long since destroyed any physical evidence.

“There was hardly anything to go on,” Hill says. “No DNA.”

Since quite a bit of money was left in the car, robbery doesn’t seem to be a likely motive for the murder. Speculation about Sanford’s relationships with women points to a more personal reason, such as the wrath of a cuckolded husband.

Elvira visits her son’s grave frequently, and though officials took a DNA sample from her to verify his identity, she still worries: Are the bones buried there really his?

The passage of time may be a detective’s worst enemy, but it can also be an ally. If Sanford’s murderer is dead, maybe someone who had been afraid to come forward can do so now, for a mother’s sake.