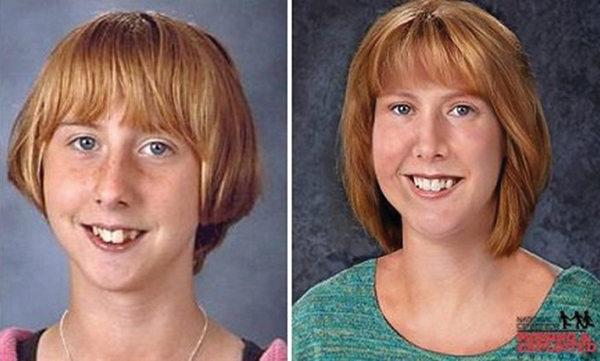 Pea Ridge is best known as the site of a Civil War battle. All the city streets are named after men who fought there. The roads that run east and west were given names of Confederate soldiers, and the north and south thoroughfares received names of Union soldiers. The King Lane Apartments are located just off one of the north/south avenues called Weston Street, for Major Eli Weston. On Nov. 18, 2006, 15-year-old April Dawn Andrews left the apartment complex and walked toward Weston, where a brown pickup truck pulled over. April spoke to the man behind the wheel and then went around the front of the vehicle and got into the passenger side of the truck, which continued southbound. No one has seen April since.

Around 5 or 6 o’clock that evening, April’s mother, Tina, called the Pea Ridge Police Department and reported her daughter missing. The first officer on the scene was Sgt. Cerilla Doyle. Coincidentally, about two years later, Doyle herself vanished. In May 2018, a retiree discovered Doyle’s skeletal remains in a rural area of Mason City, Iowa. All evidence in that case points to suicide.

Initially, Pea Ridge officials classified April as an endangered runaway. It was three years before they listed her as a missing person, and three years after that, they turned the investigation over to the Benton County Sheriff’s Office.

“The Pea Ridge Police Department did nothing wrong,” says Lt. Hunter Petray, the current detective on the case. “It’s just that the sheriff’s department has a larger agency, and they thought we should take the lead on it and use our resources to work it.”

Petray goes on to say, “It was pretty obvious she did not run away because there were no means to do so; no circle of friends to enable her, no social media at that point in time to connect with anybody, and didn’t have cellphones.”

Tonya Andrews Washburn, April’s half-sister and one of her staunchest advocates, agrees that April wasn’t a runaway.

“She’s not the type of person who’s going to jump in a car with somebody she doesn’t know,” Tonya says. “She was shy and really timid around strangers.”

One reason for April’s shyness was her learning disability. Her functioning level was about that of a 10-year-old, and her disability made her a target for a group of girls who picked on her. She had poor attendance in school, partly because of the bullying.

An older sister and two older brothers had learning disabilities, too. April had five full siblings and three half-siblings. She and Tonya had the same father, who passed away in 2002 when April was 11. Her father and mother, Tina, were divorced when April was only 4 years old. Tina married again, and the family moved to a house in Springdale and then to the Pea Ridge apartment complex. Impoverished, they couldn’t afford a phone and didn’t have a car. Her mother wasn’t employed, so they relied on government assistance, for which they were eligible due to the children’s learning disabilities. According to Tonya, they also received survivor benefit checks from April’s late father.

The witness who told investigators about the brown truck was an 8-year-old girl. Earlier, on the day of the abduction, she had walked with April down to the Dollar General store, which was on Slack Street, south of King Lane Apartments. They returned around noon or a little before, and each went to her own apartment. Petray said that at some point, the little friend was outside playing and saw April get into the brown truck. The witness gave a detailed description of the truck. It was an older model, brown, beat-up, full-size, single-cab pickup. The sheriff’s office checked the registrations on all vehicles in Benton County matching the description.

“There was one individual, who lived in the apartment complex,” Petray says, “an older male who had a brown truck similar to what the witness described in the report. We’ve narrowed the truck down.” Petray wasn’t at liberty to disclose more about that line of the investigation.

Though Tonya was 17 years older than April and had a family of her own, the two had a special bond, but Tonya didn’t know about the kidnapping until a year afterward.

“They never contacted me,” she says. She voiced some suspicions about a man who was seeing their mother. Tonya thought he lived right across the street from them.

Petray put that theory to rest by saying, “It was not Tina’s boyfriend. [He] had moved several weeks before April went missing. As for him having a truck like the girl saw, no, that’s not quite accurate.”

Asked about the lag time between the witness seeing April getting into the truck and Tina reporting the disappearance, Petray says, “Looking at the family dynamics, that’s not really suspicious. The kids were allowed to play freely.”

When the sheriff’s office took over the case, Petray says they were starting from “square one. We had to go back and try to find out who did live in the apartment complex.”

They talked to people who had already given statements and others who had never been questioned at all.

Petray says, “We interviewed hundreds of people over a period of a few years, gaining intelligence. You interview one person, and they name two other people who lived there, so you track them down. They may lead you to somebody else. You can look at a lease to see who lived there, but it won’t mention a brother-in-law from Texas who stayed there two weeks, or a cousin who visited for a couple of days. It’s a low-rent apartment complex [with] a lot of turnover. There were a number of felons and a number of sex offenders who lived there.”

In 2013, authorities received an anonymous letter, saying they should drain a pond near Little Flock in Benton County, so they did — but found nothing.

“We have identified the person who wrote the letter,” Petray says. “And it was from somebody who knew somebody who lived in the complex at the time and felt like maybe that person was involved. Really no direct knowledge; it was more of a suspicion, which is good. If people suspect something, yeah, we want to know about it. Tips come in, and we follow up on those. We did a search warrant on a residence less than a year ago based on a lead.”

Without any sightings of April and no communications from her in a decade and a half, expectations for a happy ending grow dim.

When asked if she thought April is still alive, Tonya says, “I want to say she is, but I don’t think she is.”

Authorities continue to push forward with the case.

“It’s still a missing persons case because we don’t have a body,” Petray says. “You don’t want to lose hope for the family. You see all these success stories where years or decades later, a missing kid is found alive, and that’s possible.”

If someone knows anything about the disappearance of April Dawn Andrews, please call the Benton County Sheriff’s Criminal Investigations Division at (479) 271-1009.

READ MORE: Murder in the Ozarks: Closer to Closure