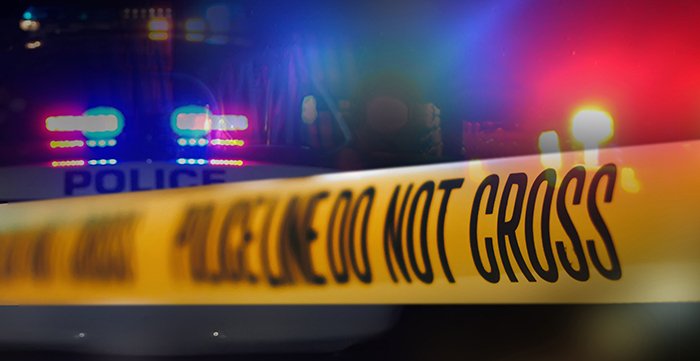 His prey is nocturnal, so he hunts at night. Like a shadow himself, he moves through the degrees of darkness and attacks our most vulnerable citizens. Little Rock seems to have a serial killer in its midst. His victims are pedestrians, and his weapon of choice is a knife. Twitter followers and online true crime devotees have been calling him the “Little Rock Slasher” or the “River City Ripper.”

The murderer first struck around 2 a.m. on Aug. 24, 2020. The victim was 64-year-old Larry McChristian. Police found his body in the 2200 block of South Gaines Street. He had been stabbed multiple times.

August 2020 had been stormy and cooler than usual all month. It was the wettest August on record for Arkansas. After a brief spell of tranquil weather, more rain moved into Little Rock on Sept. 23, 2020, and the temperature dropped into the low 60s. About 3 o’clock that morning, officers responded to a 911 call from a man in the 4200 block of West 12th Street. The caller explained he was looking for shelter when he found his friend, known to him as “Old School,” lying dead on the front porch of a house. Police saw what they thought were puncture wounds on the victim’s neck. The medical examiner used fingerprint records to identify the deceased as Jeff Welch, 62.

The year came to a close without any more stabbings similar in nature, but the Little Rock Police Department (LRPD) continued to work the two cases, just as they did many others. The city’s finest had seen an increase in murders in 2020. The force has seven homicide detectives, and each one averaged seven new cases by the end of the year. That’s three or four more than is recommended by the U.S. Department of Justice. The novel coronavirus pandemic had an effect on the overall crime rate. During the lockdown phase, robberies and property offenses were less frequent because people were staying home. The same could not be said for homicides, especially those involving domestic disputes.

When April 2021 rolled around, the problem of drag racing had become a safety concern in the city, so LRPD was dealing with that while still trying to keep up with violent crimes. From the dawn of the new year to mid-March, the homicide rate escalated to a 57 percent increase over the same period in 2020, but it was not until April 11 that an attack similar to those from August and September happened again. Same modus operandi, same time frame, same area, and almost the same victimology. Almost because the target of the third attack was a woman. Debra Walker, 42, was not just the slasher’s first female prey; she was the only victim to survive.

At 3:33 a.m., police received a call about a stabbing at 1906 South Pulaski Street. Upon their arrival, they found Walker bleeding from numerous knife wounds. She told police she had been walking near the intersection of 19th and Marshall Streets when a man accosted her and started stabbing her with a knife. She could not state in which direction he had fled. Walker was taken by ambulance to the University of Arkansas for Medical Sciences campus where medical personnel ascertained she had been stabbed 15 times. She was able to tell detectives that the perpetrator was Black and about 6 feet tall with a slender build. Officers collected the clothing Walker had been wearing, and they also looked for clues at the crime scene.

The stabber’s bloodlust was so strong that he killed a man only 27 hours after the attempted murder of Walker. This fourth victim was 40-year-old Marlon Franklin. His body was discovered in the 2700 block of Wright Avenue. The police report listed Franklin as homeless.

At the end of April, LRPD Chief Keith Humphrey issued a public alert, saying investigators believed all four attacks were related. He warned residents and workers in old historic Little Rock to be aware that a menace was among them. The department assigned uniformed and plainclothes detectives to the area and increased patrols there. Humphrey appealed to the public for help, asking that anyone who had seen anything suspicious, or thought they might know the stabber, to call a tip line at (501) 371-4636. The department’s Public Information Officer Mark Edwards verified that the person or persons who could provide information leading to the arrest and conviction of the guilty party would receive a $20,000 reward.

Investigators obtained videos of the killer from surveillance cameras in the vicinity of the crimes. Though the videos are dark and of poor quality, in one portion the killer can be seen as he walks toward a street intersection, hesitates and retraces his footsteps before turning around again and strolling toward the street corner and out of the camera’s view. He appeared to be wearing gloves. 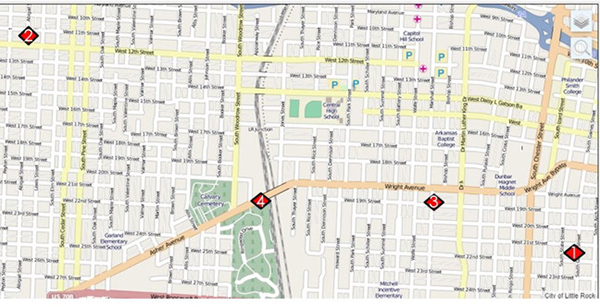 A map showing the locations of the incidents. (Little Rock Police Department)

Humphrey mentioned the randomness of the attacks. Three of the victims were white, and one was Black. Neighborhood residents are taking precautions, following police advice that they do not walk alone. For more than a year, people have been practicing social distancing, but with a cold-blooded killer roaming the streets, they find safety in numbers.

According to statistics in a 2017 FBI crime report, guns are used in the majority of slayings, but roughly 10 percent of people who commit murder in the United States use knives and other cutting instruments as weapons. Though none are considered run-of-the-mill, officers now focus on each stabbing with more intensity. On Aug. 13, North Little Rock Police arrested a young male in the fatal stabbing of a 55-year-old man at the Kroger store on Camp Robinson Road. However, just because the police nab someone who has stabbed an individual and fits the general description of the most wanted killer does not mean he is the one who has been terrorizing the capital city.

The FBI and its Behavioral Analysis Unit (BAU) have been assisting local authorities in the stabbing incidents. The federal agencies have more resources at their disposal, including advanced technology and national databases that collate evidence from comparable cases. The BAU also has more experience with serial killings.

Analyzing the murders includes looking at the victimology. On the surface, the only thing the victims had in common was being in the same area in the wee morning hours. Does the offender live or work in the community? He seems familiar with the territory. Otherwise, how has he gotten through the police dragnet? What kind of job would allow a person to be out and about in the middle of the night without attracting attention? What is his motive? Does he do it for kicks or to make himself feel powerful? Does he live alone? If not, does a roommate or family member know or at least suspect something is amiss?

Where is he now? Is he already in police custody on other charges? Maybe he has moved on. Or maybe he passed you on the street today. Don’t worry … unless you, too, are a creature of the night.

Make a Child’s Holiday Brighter with a Donation to Festival of Stars
December 7, 2022