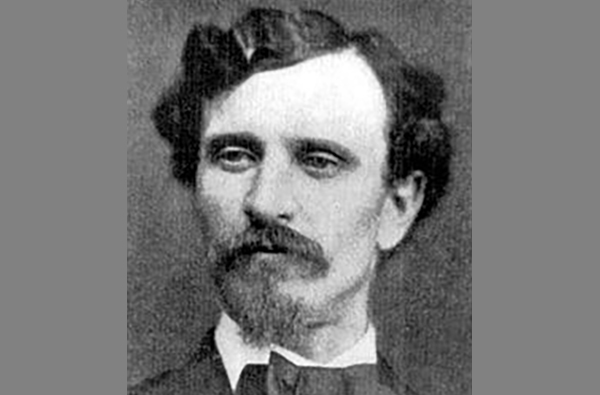 The light from the oil lamp through the window shone brightly against the dark of the moon outside. It illuminated the two men in the Plumerville house so well that the shooter waited patiently in the cold night air for the most opportune time to strike. When his target sat down at a table to write a letter, the assassin fired his weapon. Buckshot shattered the glass window and almost blew the victim’s head clean off. Blood, hair and brain matter went all over the room. Thus did the life of John Middleton Clayton come to an end. The gory spectacle made the other man inside lose his senses temporarily.

Clayton was the brother of Arkansas’ ninth governor, Powell Clayton, a Republican who served in office during Reconstruction and then as a member of the U.S. Senate. It was a time when Conway County constituents were as divided as the nation had been in the Civil War. Clayton’s assassination on Jan. 29, 1889, is a testament to just how dirty politics can be.

The northern part of the county had been more sympathetic to the Union because, under the Confederacy’s conscription law, the only way a draftee could avoid service was to hire someone who was exempt from the draft to replace him. The cost of hiring a substitute was usually around $200 but could be as high as $3,000, so rich men were the only ones who had the means to stay home. Many draftees deserted, and some joined the Union army.

Arkansas’ Republican Party, formed in 1867, dominated the state’s politics in the years of Reconstruction, and was popular in northern Conway County with poor white residents and with Black residents after the 15th Amendment granted them the right to vote in 1870.

The southern part of Conway County, nearer to the Arkansas River, had rich bottomland and cotton plantations, and prior to and during the war, it had slaves and the Democratic Party. With the end of Reconstruction, Democrats sought to regain government control, and the stage was set for the beginning of a century of political corruption in Conway County.

In the 1886 election, three Democrats tried to stuff the ballot box in Plumerville but were unsuccessful. The alleged culprits were Tom Hervey, Ben White and Bob Pate. Despite such skullduggery, G.E. Trower became the first person of color to be elected to the Arkansas state legislature. After the 1887 General Assembly, however, two men took Trower at gunpoint off the train that was carrying him home, and he was never seen again. Some sources suggest he was murdered and thrown into the Arkansas River, while others say he was forced to relocate to another county. The grandson of a witness to the kidnapping said one of the men who forced Trower off the train was Hervey.

Center Ridge was a Republican stronghold, and by 1888, its numbers had multiplied with an influx of African Americans formerly from Georgia. The political opposition knew they couldn’t win that year’s election fairly, so they resorted to chicanery. In the September election, to fill seats in the local and state government, an armed Democratic militia, led by W.J. Stowers, made their presence known at the polling place in Morrilton. And if intimidation wasn’t enough, a Democratic constable arrested George Baker, a Republican election judge, and replaced him with a Democrat. Similar trickery took place in Plumerville. Among the men who counted votes were Hervey, White and Pate.

John M. Clayton, a former Union officer, was married with six children. He was an active member of the Republican Party and had held office as the state representative for Jefferson County. He also served in the state Senate. In 1888, Clayton announced he would run for the United States Congress from Arkansas’ Second District, a contest to be decided in the November election. The Democratic candidate was Clifton R. Breckinridge.

Because of the irregularities in September’s election, a federal judge assigned a special poll watcher, Charles Wahl, to ensure the integrity of the ballot counting in Plumerville. But Wahl could do nothing when four masked, gun-wielding men entered the room and stole the ballot box and poll books. Clayton lost the election by 846 votes.

Wahl said he recognized the voice of one of the thieves as that of Deputy Sheriff Oliver Bentley, so Oliver and his brother, George, were chief suspects in the ballot heist. Fearing a federal investigation, George considered turning state’s evidence. One morning in late November, Oliver shot and killed his brother. A witness said Oliver’s revolver accidentally discharged, but someone who saw the body claimed the gun must have “accidentally” discharged five times. Nearly three weeks after the fratricide, an attempt was made on Wahl’s life when an unknown gunman wounded him, shooting off part of his ear.

The following month, John Clayton announced his intention to contest the election results and said he would be taking depositions from Black voters in Plumerville. Carroll Armstrong, chairman of the Conway County Democratic Committee, would question voters on Breckinridge’s behalf. Arriving on Jan. 25, Clayton ordered his bags be taken to the Simms Hotel, a two-story building in town. The owner, a Democrat named John Simms, turned Clayton away, directing him to a one-story boarding house run by a Mrs. McCraven. Clayton was accompanied by W.D. Allnutt, a lawyer and notary public.

While Clayton was in Plumerville, Oliver was trying to negotiate a deal in which Clayton would get the stolen votes back in exchange for the feds dropping all indictments. He seemed to be doing what he killed his brother for doing. Talks failed when Oliver would not agree to all conditions stipulated by the Republicans. That sealed Clayton’s fate.

George’s grandson, John Mason, told Arkansas journalist Ernie Deane that 19 men in the conspiracy to kill Clayton drew straws, and Bob Pate drew the short straw. Pate’s brother, Charles, went with him to Mrs. McCraven’s rooming house, and the two watched Clayton through a gap between the window curtains in the parlor. The politician was pacing the room as he talked to Allnutt. After he sat down at the desk, the deadly shot rang out.

More than 5,000 people attended Clayton’s funeral in Pine Bluff. Still in mourning, Powell Clayton and John’s twin brother, William, hired Pinkerton detectives to investigate the murder, and the Arkansas governor and state legislature offered a $6,000 reward for the arrest and conviction of the person or persons who assassinated Clayton. On March 30, a local Black man, Joe Smith, told the Pinkertons he knew a fellow who could identify the murderers but was afraid to talk. That night, 18-year-old David Richmond reportedly shot Smith to death, but a grand jury let him off the hook, saying the case was justifiable homicide.

Cyrus McCullough was the source of John Mason’s account that named Bob Pate as the assassin, but when the investigation turned toward him, McCullough testified he was playing cards with Pate in Pate’s saloon at the time of the crime, providing an alibi for each of them.

Clayton’s slayer or slayers never faced a judge and jury.