South Duncan Avenue in Fayetteville was a dimly lit street, but the moon was full on the night of April 12, 1971. Mike Adair could see Pauline Storment walking from the University of Arkansas toward her apartment as he was driving home. He also saw a man following Storment. Mere seconds later, Adair and everyone within earshot heard the young woman’s screams. Jack Huff of 24 Summit Terrace ran from his apartment to lend aid, and Storment told him someone had hit her in the chest. As it turned out, she had suffered seven stab wounds to her chest and arm. Other witnesses rushed to Storment’s side, and as they waited for an ambulance, they heard her say that her assailant wore glasses and that he had run toward the campus, which was two blocks away. Joe Clifton, who lived on nearby Nettleship Street, also heard the victim’s screams and later told authorities that he, too, had seen a man following Storment and described him as wearing a brown sports jacket and was about 6 feet tall. Gary Gammell lived near Huff and arrived at the scene just as Storment crumpled to the ground in front of her apartment, but he could only reiterate that the attacker had run toward the campus. Storment, 27, died in surgery at Washington Regional Hospital at 11 p.m., an hour and a half after the stabbing occurred. Her last words were: “Don’t hurt me.”

About 40 minutes after the fatal assault, police officers noticed a car parked on Dickson Street four blocks away from the crime scene. One occupant of the car, Wallace Peter Kunkel, 17, had blood on his jacket, so he was taken in and held for questioning. Blood was also detected on his shirt and pants. He invoked his right to remain silent and requested an attorney. Investigators sent his clothing to the state medical examiner for analysis.

According to autopsy results, the weapon used in the slaying was some kind of cutting instrument similar to a butcher knife with a 6- to 8-inch blade.

Storment, a divorcee, was a sophomore at the university and had enrolled there the previous fall. She had completed her freshman year at Arkansas Tech University six years earlier. In the interim, she worked as a secretary in St. Louis and for a security company in Memphis and Atlanta. Alice Pat Murphy, Storment’s roommate in Fayetteville, described her as a quiet, studious girl who wasn’t dating anyone. The two co-eds had been roomies for only 12 days but had known each other since mid-semester.

Investigators traced Storment’s movements on the night of her murder. She had spent time earlier in the evening at the ROTC offices where she worked, then attended a musical production at the Fine Arts Center. She visited the main library before leaving campus. Murphy said Storment usually arrived home around 10:30 p.m. instead of 9:30 p.m., the time she was attacked. Other than that, nothing out of the ordinary had happened, as far as Murphy knew. She said Storment didn’t drink or use drugs and held down two part-time jobs when she wasn’t attending classes. In addition to her work at the ROTC office, she was an employee at the Malco Theatre.

Storment was born on April 3, 1944, and was the daughter of Lillian and Paul Storment. She was laid to rest in Highland Cemetery in her hometown of Ozark. Besides her parents, she was survived by two half-sisters. A half-brother had died at the age of 35, just four years before Storment’s murder.

In the nights following the slaying, no women ventured down South Duncan Avenue, and they walked in groups or with escorts on campus. Radio and newspaper outlets tried to run down all the rumors that abounded, and switchboard operators at the police station were inundated with calls from anxious citizens. Students who gathered in clusters to discuss the murder wondered about the youth who was in custody. Detectives questioned his companions and reinterviewed witnesses.

On the third day after the homicide, Sheriff Bill Long found a butcher knife thrust into the ground behind a vacant house across the street from Storment’s apartment. Arkansas State Police took the knife to Little Rock for fingerprint and chemical tests. Police Chief Hollis Spencer expressed his doubt that the knife was the one used by the killer, but one day after Sheriff Long found the potential weapon, Prosecuting Attorney Mahlon Gibson charged Kunkel with premeditated murder. 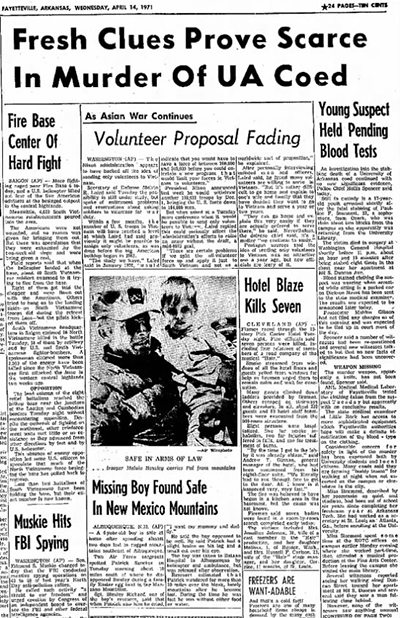 At arraignment, Kunkel’s lawyer, Richard Hipp, moved to have Circuit Judge Maupin Cummings set aside Kunkel’s arrest due to a lack of probable cause, but Cummings overruled him. Hipp bombarded the court with discovery motions, asking the prosecution for everything they had: results of all tests, type of weapon used, a description of wounds inflicted on the victim, a complete list of witnesses and all physical evidence.

Kunkel’s legal nightmare was over soon, however, when Prosecutor Gibson announced that the murder indictment was nolle prossed, which basically is a dismissal of charges. This turn of events was due, in part, to the defendant’s decision to submit to a lie detector examination after being assured by Gibson and Spencer that they would be bound by the results.

Chief Spencer said at the time, “Yesterday afternoon, Mr. Kunkel’s attorney agreed to an interview and polygraph test. As a result, we are satisfied that he had no part in the murder of Miss Storment.”

Kunkle and his parents held a press conference after his release from jail. He expressed no ill will toward anyone and thanked his parents, friends and attorney for their support during his ordeal. Both of his parents wept with relief and joy upon greeting their son, his father saying to reporters, “I am never ashamed of tears for my son.” Mrs. Kunkel was grateful for the “high caliber care and consideration shown by Chief Spencer and all his employees. They have been so good to us.” 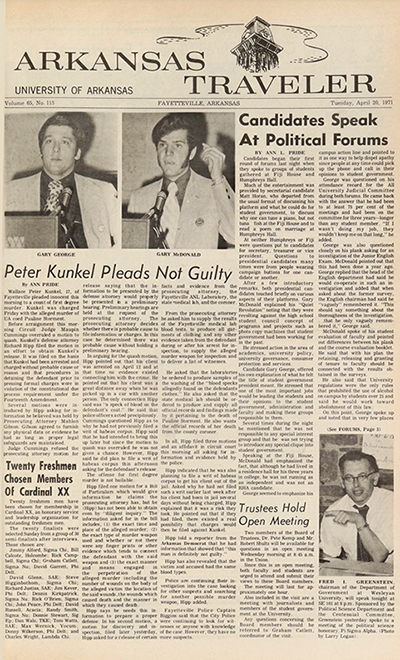 Original newspaper clipping from the Arkansas Traveler discussing the murder.

The university’s student newspaper, the Arkansas Traveler, ran an ad in the classifieds on the day Kunkle was freed. It read, “FOUND: One pair of glasses near the S.E. Auditorium.”  Storment said her assailant wore glasses. Could he have lost them in his haste to escape?

A month after Storment’s murder, detectives were no closer to solving it. They looked into her previous employment at the security company when she lived in Memphis and Atlanta. Her job was to help catch thieves at department stores that hired the security firm. This meant watching for store employees with sticky fingers, as well as shoplifters. The security company cooperated in trying to trace individual cases in which she was a witness, but this line of inquiry never panned out. Investigators grappled with the lack of an apparent motive for her slaying. Was she just in the wrong place at the wrong time? Did she leave for home early because she encountered the killer at the library and sensed danger? Had the murderer been stalking her, or did he act on impulse? Could her killer still be identified through DNA if the evidence collected is still stored somewhere? Why did this murder not gain more attention?

So many questions, so few answers.