James Casharago was a handsome man, thanks to his genes. Though of Italian heritage, his blond hair, green eyes and fair complexion indicated his family had emigrated from the northern part of the old country. They came to the United States around 1850, changed their name from Casiraghi, and eventually settled in the Republican community in Faulkner County where they bought 160 acres of land for $12.50 an acre, and later bought another 160 acres. James’ father, Louis, fought in the Civil War on both sides, first in the Confederate infantry and then the Union cavalry. Louis suffered a severe leg wound that may have caused him to have a fatal fall from a barn roof when James was still a baby. Sources differ about the circumstances of his formative years after his mother remarried. Some say he suffered beatings at the hands of his stepfather but remained an affable boy whose upbringing was no more troubled than most young fellows on the frontier. Other writings, however, portray him as a thief at a young age. Petty thefts, usually. His mother would make restitution to keep their name in good standing.

Sources also differ about the series of events that led him down the wrong road and into the books of Western lore. One version of his story goes like this: Casharago married Mary Salter in 1888 and went to work for an unscrupulous wheeler-dealer named Jim King. The 19-year-old Casharago didn’t know what he was getting himself into, and by the time he did figure things out, it was too late. Years afterward, he said, “Jim King and others have caused me to fill a premature grave.” King persuaded Casharago and another young man, R. L. Garner, to help him in a scheme to fleece prospective landowners by forging names on promissory notes. When the jig was up, King weaseled out of trouble by blaming the whole thing on his young stooges, Casharago and Garner. 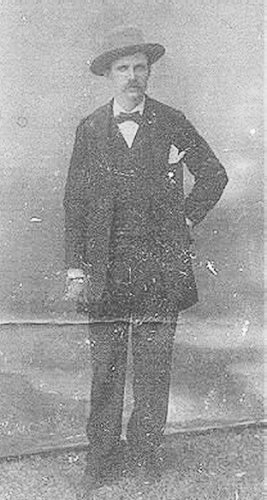 Other accounts say that Casharago — not King — defrauded the public. Casharago was indicted for forgery and jailed in Morrilton, but escaped and went to Searcy County. From there, he sent for his wife and child. Hot on their heels, though, were the lawmen pursuing him. He fled first to Missouri and then back into Arkansas, where he pulled his first heist in Cleburne County. It netted him the princely sum of thirteen dollars. His life of crime now began in earnest. A stealing spree across four states brought easy money, but he ended up having to pay dearly. In Union City, Tennessee, he and two cohorts were caught and sentenced to hard labor, and he spent his twenty-first birthday mining iron ore for the state.

After his release in 1892, Casharago worked on a railroad in Mississippi. But it wasn’t long before he fell back into old habits. Still on the lam from the law in Arkansas, he nevertheless returned. It has been reported in some historical writings that he joined Henry Starr’s outlaw gang and was with them when they held up the Peoples Bank in Bentonville on June 5, 1893. Starr, however, never mentioned Casharago in his autobiography. The mix-up is probably due to Casharago adopting an alias, George Wilson, to throw the police off his trail. “Kid” Wilson, not George, was in Starr’s gang, and participated in the Bentonville robbery.

Casharago accepted a job offer from Zachariah Thatch, a farmer in Washington County. The honest employment seemed to settle him down but not soon enough to save his marriage. His wife divorced him on the grounds of desertion. The autumn of 1894 and winter of ’95 was a time of peace and reflection for the young fugitive.

In April 1895, Thatch wanted to travel into Indian Territory and take a look at some of the land that would be up for grabs in the Kickapoo Opening, which was the fifth of the land runs in what would become Oklahoma. After allotting tracts to the Kickapoo Indian Tribe, the remaining acreage would be settled by non-Indians. Casharago accompanied Thatch on the trip, but before they reached their destination, Thatch became ill. To make matters worse, Casharago’s horse pulled up lame. He loaned Thatch $82.50 to return home and seek medical attention. When they reunited, Thatch paid Casharago back by giving him a wagon and five horses. They didn’t bother to put the transaction in writing.

Resuming their journey, they encountered two of Thatch’s acquaintances, a Mr. Thompson and a Mr. McGlothen, who were stranded because their only horse had died leaving them with no way to pull their wagon. Thatch loaned them a horse until they could get one of their own. They would catch up later to return Thatch’s mare. Casharago and Thatch camped by the road at Rock Creek because they knew Thompson and McGlothen would be following along that route. Upon their arrival, the four men continued on their way. As they neared the town of Shawnee, Casharago suggested the others go on without him because he was worried that he might be recognized when they went through the more populated area. Before they parted company, he gave Thatch his saddle in exchange for Thatch’s saddle and Winchester rifle. They didn’t see the need for signing any papers to record the temporary trade. Thatch rode off with Thompson and McGlothen, and Casharago drove his wagon to a farm where the landowner allowed him to set up camp and water his horses.

On May 26th, Casharago heard the news about a dead body being found close to the camp he had shared with Thatch at Rock Creek. Shortly thereafter, two men came riding up with guns drawn. They identified themselves as U.S. Marshals and arrested Casharago. He thought they were nabbing him for the forgery and jailbreak in Arkansas and was stunned to learn that he was wanted for the murder of Zachariah Thatch. When Casharago — still going by his alias, George Wilson — saw the remains, he said the overalls on the slain man looked like Thatch’s clothing, but the face was unrecognizable. The victim’s head had been bashed in and had decomposed to such an extent that a positive identification could not be made. Casharago told the lawmen that Thatch was traveling to the Kickapoo Nation through Shawnee with Thompson and McGlothen, but Thompson and McGlothen were nowhere to be found.

The marshals put Casharago in chains and delivered him to the jail in Fort Smith. Though it was officially in the basement of the courthouse, the jail was more like a square hole underneath the building. Conditions were appalling. Very little light or air came through the underground windows, and over a hundred men might be housed there at the same time. Henry Starr, who was once incarcerated in the jail, said the odor was “worse than the animal section of a circus.” If a prisoner was lucky enough to have a blanket, it reeked with filth and lice. Juvenile offenders were thrown in with hardened criminals. This is where James Casharago awaited his fate and his appearance before the jurist Isaac Parker, better known as the “hanging judge.”