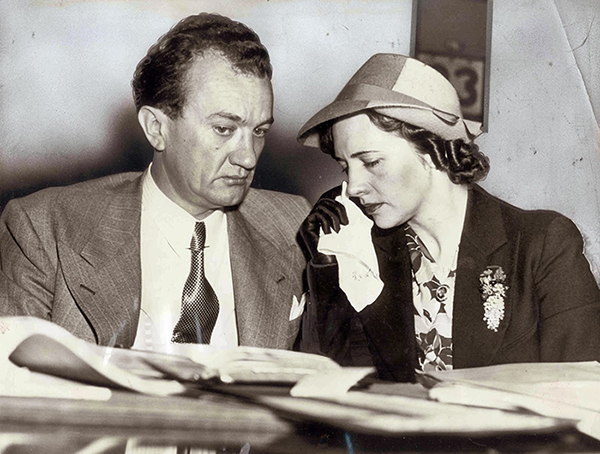 In the early 1930s, a rivalry between two preachers, Joseph Jeffers and Dale Crowley, resulted in violent confrontations between their opposing factions. This series of incidents, known as the “Jonesboro Church Wars,” led to one of the ministers being tried for murder.

After the chancery court declared the 34-year-old Crowley was the rightful leader of the Jonesboro Baptist Church, he drove to the tabernacle located on the corner of Matthews and Cobb Streets. To this day, questions remain about what happened next. Even the number of people involved is uncertain. To ward off “Jefferites” who had threatened to do him harm, Crowley was carrying a .32 caliber pistol. He was accompanied by L.H. Kayre who, though he used a cane, was referred to in news reports as a bodyguard. John W. MacMurdo, 68, whose usual stock and trade was as a janitor/watchman, had been a guard, of sorts, for Crowley’s nemesis, Joseph Jeffers. Though Jeffers had left town, MacMurdo was still loyal to his spiritual leader and was at the church when Crowley arrived. Like the preacher, he was armed with a .32 automatic. Crowley told MacMurdo to leave, but the janitor refused and became agitated and argumentative. Crowley wouldn’t be baited and walked toward the door. He glanced back over his shoulder and saw a pistol leveled at him. MacMurdo shot at him, but it was as if the hand of providence gave Crowley a gentle push, for just as his would-be back-shooter fired, the pastor stumbled and fell down some steps. His own pistol dropped out of his pocket, but before he could get it, MacMurdo pulled the trigger again. Kayre, standing nearby, used his walking stick to hit MacMurdo’s arm, spoiling the janitor’s aim. Simultaneously, Crowley regained his balance and shot back at his foe. Two of Crowley’s bullets struck MacMurdo in his legs. Another bullet tore through his back, piercing his stomach, which proved to be the wound that would end his life a few hours later. The fatal slug was a .38 caliber and came from a gun found on the floor near MacMurdo. The owner of the .38 was a mystery.

Several women who were loyal to Jeffers were in a different part of the church, attending prayer services when the shooting occurred. And to prevent Crowley’s escape, they destroyed  the seats in his car and tossed his keys away. Crowley, however, had no intention of running. When arrested, he admitted to shooting MacMurdo but claimed it was self-defense. Before succumbing to his injury, MacMurdo told police and his doctor that Crowley had shot him in cold blood without any provocation.

As tempers flared in the community, Sheriff Houston Johnson ordered Crowley to be taken to the Jackson County Jail in Newport, but after bail was denied, the minister was moved to the Craighead County Jail to await his trial. At around 10 p.m. on the night of October 17, 1933, someone pointed the barrel of a machine gun between the bars of Crowley’s cell window and blasted away. Luckily, Crowley’s bunk was against the wall under the window, so he was unscathed. A witness, Tom Stewart, was near the alley when the attempted assassination occurred and saw muzzle flashes but didn’t get a good look at the gunman.

The investigation of MacMurdo’s death moved forward. Evidence showed that three weapons were used during the gunfight; Crowley’s .32, MacMurdo’s .32, and the mysterious .38 caliber pistol. Crowley’s weapon was emptied of ammunition, and two bullets had been discharged from MacMurdo’s gun. One round had come from the .38, which had also misfired twice.

Because of pre-trial publicity, defense attorney Ivie Spencer requested and was granted a change of venue for his client’s trial. With Judge Weill Killough presiding, the proceedings began in Piggott the first of January, 1934. The prosecuting attorney was Denver Dudley, and Blytheville attorney Seal B. Harrison headed up the defense team. The jury was empaneled quickly and consisted of four Methodists, two Baptists, and six farmers who were non-churchgoers.

Dudley’s opening remarks briefly reviewed the history of the church feud and the events leading up to the tragedy. He claimed that Kayre had used his cane to strike MacMurdo on the head, not the arm. He said the blow broke MacMurdo’s glasses, causing temporary blindness and leaving the elderly man at the mercy of Crowley.

Dr. J.T. Alton testified for the defense, saying that because of the angle of the fatal shot, it could not have come from Crowley’s gun. The two men were facing each other when MacMurdo was shot in the back. Attention returned to the .38 caliber weapon. It was then that a prominent Jefferite, Walter Montague, who claimed the gun was his and said he had loaned the firearm to MacMurdo a couple of days prior to the shooting. Why hadn’t Montague spoken up sooner? Who actually fired the .38? And why would a Jefferite (Montague) say something that would help Crowley’s defense? The lack of answers to these questions was quite a head-scratcher. Did MacMurdo shoot himself in the back? Not likely.

The trial lasted four days. In his closing statement, Dudley said he had not requested the death penalty but asked the jurors to fix the punishment at whatever period of time they thought Crowley deserved. When Harrison presented his summation to the jury, he referred back to Kayre’s role in the real-life drama, maintaining that Kayre had hit MacMurdo on the arm.

“That,” Harrison declared, “Is the only reason Rev. Crowley is here today and not Mr. MacMurdo.”

The prosecution’s case had so many holes in it, the jury deliberated for only three minutes before acquitting the pastor. Cheering broke out among the spectators, and Crowley and his wife rushed over to shake hands with each juror.

Crowley spoke to the gathering of reporters, saying, “I very much appreciate the fairness of a just court and the faithful services of my counsel. This case never would’ve come to trial, except that Denver Dudley saw an opportunity to get national publicity.”

Crowley stayed in Jonesboro for a few years before going into radio ministry. His programs were aired in Washington D.C. from 1941 until his death in 1994, when his son, Dale Jr., took over for him.

Noticeably absent from the climax of the church wars was the man who started it all, Joseph Jeffers. He left Jonesboro soon after the shooting. For the rest of his life, he would be lesser known for his evangelism than for his run-ins with the law. He was once arrested on a morals charge for hosting sex orgies, and he followed that with prison terms for car theft and mail fraud. He fleeced his flock out of thousands of dollars in order to support a lavish lifestyle that included ownership of a California mansion he called the Kingdom of Yahweh. He died in 1988 at the age of 89.