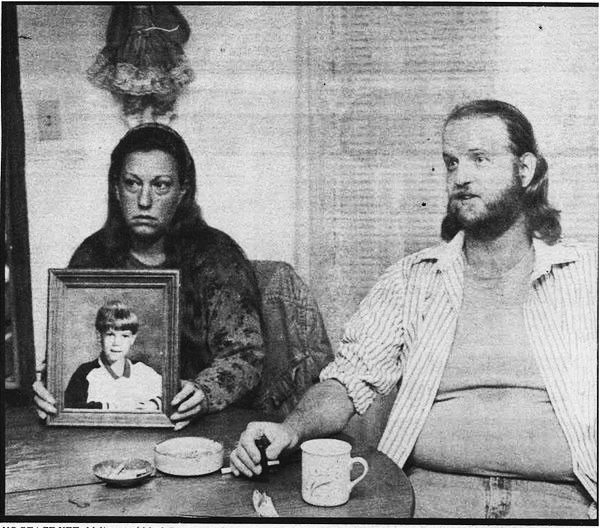 On the night Christopher Byers, Stevie Branch and Michael Moore went missing, a search party looked for them in a forested area of West Memphis known as Robin Hood Hills. Among the searchers were Christopher’s teenage half-brother, Ryan Clark, and three of Clark’s friends. As they approached a water-filled ditch that emptied into Ten Mile Bayou, a nearby canal, they heard five loud splashes. Ryan called out, “Is anyone there?” Nobody answered. The boys ran toward the pipe bridge that crossed the bayou, but when they heard a gunshot, they didn’t go any farther. The bodies of Byers, Branch and Moore were found in that ditch the next day. Five splashes. Had Clark heard the killer, or killers, throwing the three slain children and their two bikes into the water?

In the aftermath of the murders, people who didn’t fixate on Satanism as a motive discussed various theories.

Robin Hood Hills was located near the convergence of two freeways, I-40 and I-55. The Blue Beacon Truck Wash was only yards away from the woods on the other side of Ten Mile Bayou. Could the killer be a truck driver? According to an article in Psychology Today, “No single occupation comes close to matching the long-haul truck driver as a serial killer’s profession of choice.”

Early in the investigation, police received a tip about two young Memphis men who had high-tailed it out of town shortly after the murders. Christopher Morgan and Brian Holland had gone to Oceanside, California, where police picked them up for questioning. Morgan had once driven an ice cream truck through the slain children’s neighborhood. He reportedly had a history of alcohol and drug abuse, and after several hours of interrogation, he confessed that he might have blacked out and committed the murders, but he immediately recanted the incriminating statement. Much to the dismay of defense attorneys for Jason Baldwin and Damien Echols, Judge David Burnett refused to let Morgan testify. Jurors never heard about the alternate suspect.

An individual often mentioned in discussions about the crime has been nicknamed “Mr. Bojangles.” The Bojangles Restaurant was located about a mile from the crime scene. At 8:42 p.m., police officer Regina Meek responded to a call from the restaurant manager who reported that a black man, covered in blood and apparently disoriented, had entered the premises and gone into the women’s restroom. After he left, restaurant employees found blood smeared on the walls of the bathroom. Meek took the report at the drive-through window and then left without investigating the incident any further. It wasn’t until the following night that Detective Bryn Ridge collected scrapings of blood from areas in and around the ladies’ room, but the scrapings were lost by the time the first of the murder trials began. The stranger’s race is of interest because crime lab analysts found a hair from a person of African descent on the sheet that was wrapped around Byers’ body for transport to the morgue.

The type and combination of knots used in binding the victims were the same on two of the boys but were different on the third. Does this point to more than one killer or was it one killer working in a hurry? If it were a single individual, how did he gain control over three boys?

An authority figure such as a cop or a parent? The Arkansas State Police had been investigating the county’s drug task force at the time, which included officers from the West Memphis Police Department and the Crittenden County Sheriff’s Office. Could the victims have seen something they weren’t supposed to see, something like a drug deal going down? Or did they witness something else, such as two or more people engaged in sexual activity that the participants wanted to keep secret? Motive in this case is crucial. Find the motive, find the killer.

FBI profiler John Douglas calls the murders a “personal cause homicide,” meaning the killer, or killers, knew the victims. “The focus of the investigation,” Douglas says, “is always on the families. You start from there and work your way out.”

Two weeks after the slayings, detectives interviewed Christopher’s stepfather, Mark Byers. According to him, on the afternoon of the murders he had been at a doctor’s appointment. At the end of the workday, he went to pick up his wife, Melissa, from her job in Memphis. After dropping her off at home, he headed to the West Memphis Courthouse to get Ryan Clark, who had been a witness in a hit-and-run case. On the way there, Mark saw Chris skateboarding down the middle of the street, which was against parental rules. He took Chris home, whipped him and ordered him to clean the carport. When Mark returned with Ryan at 6:15 p.m., Chris was gone.

Authorities knew Mark had a potential for violence because he had once been arrested for terroristic threatening during an argument with his first wife. He also had a record of drug busts but had turned informant and was friendly with some of the West Memphis police officers. They ruled him out as a suspect.

After the murder trials, the Byers family moved to Cherokee Village, where Mark ran afoul of the law again and was charged with burglary, dealing drugs and contributing to the delinquency of a minor. He received probation.

On March 29, 1996, according to Mark Byers, he and Melissa had taken a mid-afternoon nap, and when he woke up, he couldn’t rouse her. He called his neighbor, Norm Metz, and told Metz to come over because he couldn’t wake Melissa up. When Metz entered Byers’ bedroom, he saw Melissa naked and on her back. She was limp, so Metz checked for a pulse. He told Mark to do CPR on her, while Metz ran to call for an ambulance. When he returned to the bedroom, Mark and Ryan were trying to put some pants on Melissa. Paramedics arrived, tried to resuscitate her and then transported her to the Eastern Ozarks Regional Hospital. When Metz caught up with Mark there, he was told Melissa died from a drug overdose, but Mark was afraid people would think he had smothered her. Melissa was only 40 years old.

The autopsy showed bruises on her upper arms, two small contusions on her scalp and bruises on her chest (that were consistent with resuscitation attempts). The medical examiner couldn’t determine the cause of death. Melissa had a history of drug abuse, but the autopsy showed only trace amounts of marijuana and the painkiller Dilaudid in her system. For lack of evidence, the police never arrested anyone in connection with her death.

In 1999, Mark’s probation was revoked when he sold prescription drugs to an undercover cop, and he spent 15 months in prison. In the first two Paradise Lost documentaries, Byers came across as a bizarre figure who, to quote Shakespeare, “doth protest too much.” On camera, his over-the-top theatrics as to what he would do to Echols made it easy to picture him killing someone in a fit of rage.

Police also talked to Michael Moore’s father, Todd, but they never got around to interviewing Stevie Branch’s stepfather, Terry Hobbs.