A heat wave stretched from Kansas to Ohio in the summer of 1940. Nearly 300 people died from the extreme temperatures. In the twin cities of Texarkana, July was always a scorcher. On July 24, it was already sultry by dawn, but Mrs. Gertrude Hutchins O’Dwyer didn’t see the sunrise. She was already turning cold, for someone had entered her home and murdered her.

O’Dwyer, a member of an old, socially prominent Texarkana family, was found bludgeoned and slashed to death in her bedroom in the fashionable Glendale addition shortly before 7 a.m. Police said she was found by her husband, R.J. O’Dwyer, Jr. The victim was lying halfway on her bed, her throat cut from ear to ear and her head battered from numerous blows. Police said a butcher knife and a car axle were the weapons used to take her life. R.J., 45, slept in a nearby bedroom but heard no outcry. He and his wife had gone to bed around 9 p.m. He sobbed as he told the authorities how he discovered his slain wife after he failed to hear her customary call to breakfast. A physician estimated her death occurred between 2 and 3 o’clock that morning.

Robbery appeared to be the motive behind the crime. The robber had torn a gold wedding band from Gertrude’s finger, stole a large diamond ring and a gold watch and rifled through a strongbox, which was left open on the floor. Evidence indicated that the killer stopped in the alley behind the home after the crime and ate a quantity of food and drank a soda, which he had taken from the O’Dwyer’s icebox. Prowlers disturbed two other households in the neighborhood that same night, but no one else was harmed. 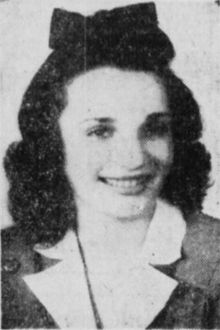 Police Chief R. Marlin Giles and Miller County Sheriff W. E. Davis enlisted the services of every peace officer within a 300-mile radius. Arkansas State Police (ASP) Lt. J. Earl Scroggin and two state patrolmen joined in the search for the slayer. Scroggin had been one of the original 13 members of the state troopers (initially called “rangers”) when the Arkansas state legislature created the ASP in 1935. He was considered an expert in identification techniques, specifically fingerprint analysis. Soon he would be promoted to captain, and five years into the future, he would gain a reputation as the officer in charge who brought serial killer Red Hall to justice. In the O’Dwyer case, however, Scroggin’s fingerprint expertise couldn’t help. By mid-morning, several suspects were being questioned, and fingerprints were taken, but none matched those found on the murder weapons.

Police in Shreveport, La., arrested two men who were “riding the blinds,” on a passenger train and held the pair for interrogation. Riding the blinds was the practice of hobos riding on the walkway between the train’s cars. The men were able to prove they were many miles away from Texarkana when the crime occurred.

O’Dwyer, 42, was prominent in church work and social clubs. Her husband never quite got over the shock of finding his wife in her blood-soaked bedroom. He joined her in death 14 years later.

Of the heap of people interviewed, no suspect ever rose to the top, so no charges were ever filed. The O’Dwyer murder remains unsolved.

Another case that stumped the Texarkana authorities in the ’40s was the disappearance of 21-year-old Virginia Carpenter. On June 1, 1948, she left her home in Texarkana and boarded a train for Denton, Texas, where she had enrolled in summer classes at Texas State College for Women (now Texas Woman’s University).  She aspired to become a lab technician, perhaps for a couple of personal reasons. Her father had been sick for two years before he died when she was only 15, and she herself had experienced pain and suffering. Her right leg was shorter than the left, the result of a childhood accident that caused an undiagnosed infection in her right hip. She was eager to begin her studies so she could help other people beset by illness and physical challenges.

Arriving in Denton at 9 p.m., she hailed a cab driven by Jack Zachary, who took her to the college campus. She gave Zachary a claim ticket to retrieve her trunk from the train station the next morning. When she got out of the taxi, Zachary said she walked up to a yellow or cream-colored convertible where two young men were standing. The cabbie heard her say, “Well, what are y’all doing here?” That was all he could hear before he drove away. According to the Taylor Daily Press, a night watchman saw Carpenter get into the car with the two youths, but this proved to be inaccurate. The yellow convertible was a red herring. It didn’t belong to the boys who were standing next to it, as they talked to Carpenter.

Three days later, Carpenter’s boyfriend, Kenny Branham, and her mother, Hazel Carpenter, realized something was wrong because neither one of them had heard from her, and the college said she had not checked into her dormitory. Mom alerted the police in Denton and went there to wait anxiously, as search parties combed the countryside.

Investigators publicized the disappearance and put out a description of her. She was 5 feet 3 inches tall, weighed about 120 pounds and walked with a pronounced limp. She had brown eyes and long, brown hair.

Detectives grilled Branham and Zachary, but both passed polygraph tests. Texas Ranger Lewis Rigler once characterized Zachary as “a rascal,” who was accused of attempted rape in 1957. Though the victim refused to press charges, the incident brought his name to the forefront of the Carpenter case again. His ex-wife then came forward to say that the alibi she gave for Zachary in 1948 was fabricated. Instead of coming home at 10 p.m. on the night of the Carpenter disappearance, she said it was past 2 o’clock in the morning. Despite this news, Zachary was never arrested in connection with the Carpenter disappearance.

A reward of $3,000 caused numerous false sightings of Carpenter, and after two years, the reward money was returned to the donors.

In 1959, a box of bones was found near an empty farmhouse northeast of Jefferson, Texas. The bones were that of a female about Carpenter’s size, and the right leg had a deformity, which made it shorter than the left, just like hers. Hopes for a positive ID, however, were dashed when the dental work didn’t match her records.

A particularly intriguing aspect to this case is its link to Texarkana’s most infamous mystery, the Phantom Killer, who slew five people in the twin cities in 1946 but was never apprehended. Carpenter knew three of the five victims. Who were the two boys last seen talking to her by the yellow car? Could it have been a prime Phantom suspect, H. B. “Doodie” Tennison, and his friend, James Freeman? By now, it’s probably safe to say that whoever was responsible for her vanishing is dead and gone and, like poor Virginia Carpenter, took this secret to the grave.