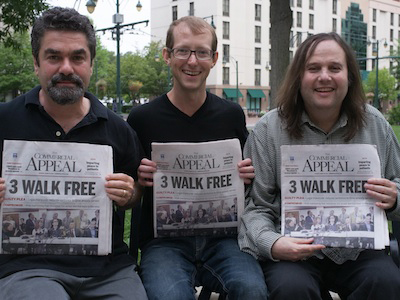 Documentary filmmakers Joe Berlinger and Bruce Sinofsky arrived in Arkansas in the summer of 1993 to cover the story of the West Memphis murders of 8-year-old Chris Byers, Stevie Branch and Michael Moore by the three accused teenagers, Damien Echols, Jason Baldwin, and Jessie Misskelley, Jr. — aka the West Memphis Three (WM3). Berlinger and Sinofsky visited the victims’ families as well as the accused. In an interview with Huffington Post, Berlinger says, “By Christmas we were convinced that these guys were innocent.”

While Berlinger and Sinofsky were seeking permission to film the trials, Circuit Judge David Burnett expressed concern about the inadequacy of the sound system in the Corning courthouse where Misskelley’s trial would be held. The filmmakers offered to install a public address system, and a deal was struck that granted them and their cameras access to both trials. The result of this agreement was the documentary Paradise Lost: The Child Murders at Robin Hood Hills.

The documentary showed the trials as shams; the result of politically ambitious prosecutors (Brent Davis and John Fogleman), a sleepy judge and a blood-thirsty community of ill-informed and superstitious people who believed the murders were a result of Satanism. Chief among them was Mark Byers, stepfather of Chris Byers. He was an intimidating, hulking figure — at least 6 feet 5 inches tall — who along with his wife, Melissa, stridently cursed and condemned the WM3.

Paradise Lost showed the prosecution’s physical evidence was basically non-existent and insufficient to connect the three to the crime. In a strange turn of events, the filmmakers ended up with a knife that became part of the evidence. Mark Byers gave it to the cinematographer, saying it was a Christmas gift, but it had blood on it. He and Chris both had that same type of blood. Mark first denied ever using the knife, then said he had cut some deer meat with it and may have nicked his thumb. Many viewers of Paradise Lost suspected him of committing the murders.

Already in evidence was a knife found in a lake behind the trailer park where the WM3 lived. The knives were considered important because, at the time of the trial, officials thought Chris had been castrated and that Michael and Stevie had been cut. Misskelley’s recanted confession contained a statement to that effect.

Paradise Lost raised awareness about the case and slowly but surely created a groundswell of support for the WM3. New York landscape architect, Lorri Davis, was among the people who saw the film and was convinced the WM3 were innocent. She began corresponding with Echols. The two began a romance and were married in 1999. Davis started writing to anyone she thought could help. She would later say it was hard to ask for money and that she labored over every word in her letters. Her tireless efforts began to pay off. Three friends created the website www.wm3.org which drew international attention. Celebrities such as Eddie Vedder, Natalie Maines, Johnny Depp and Peter Jackson donated time and money to the cause. The money raised allowed the defense to hire lawyers, investigators and experts in various forensic fields.

Meanwhile, the WM3’s appeals were winding their way through the courts. One was based on ineffective counsel and new evidence. Since post-conviction motions are heard by the judge who presided over the original trial — in this case, Burnett — it was no surprise that he didn’t overturn his own ruling. 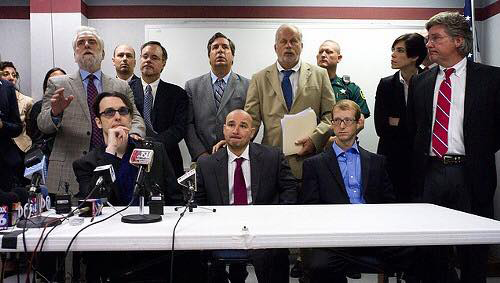 In 2001, the state of Arkansas adopted a statute that gave inmates access to post-conviction DNA testing. The prosecution and defense agreed to have Bode Laboratories in Virginia do the testing. Fingernail scrapings taken from the victims and the shoelaces used as ligatures were among the items submitted. In 2005, Bode concluded that none of the articles tied the WM3 to the crime scene, but a hair in one of the ligatures couldn’t exclude Terry Hobbs, step-father of Stevie Branch, as the source of the hair. Bode found that a hair discovered on a tree stump at the scene couldn’t exclude Terry Hobbs’ friend, David Jacoby, who had visited Hobbs shortly before the victims disappeared. By this time, a principal trial witness, Vicki Hutcheson, had admitted publicly that she lied on the stand and would be willing to testify truthfully in a new trial if provided immunity of a perjury charge. The state refused the request.

In 2007, Echols’ legal team filed another appeal based on actual innocence rather than procedural error. They cited the new DNA evidence and stated that the bloody wounds formerly thought to have been inflicted by a knife, were in fact caused postmortem by animals. This invalidated Jessie Misskelley’s confession. The defense also alleged juror misconduct. It was learned that the foreman, Kent Arnold, had finagled his way onto the jury because he wanted to make sure the three were convicted. In deliberations, he discussed Misskelley’s confession, which had been ruled inadmissible because Misskelley wouldn’t testify against Baldwin and Echols. Though the new evidence finally convinced even Mark Byers that the three were innocent, Judge Burnett denied the appeal.

Taking the case to the Arkansas State Supreme Court (ASSC), attorney Dennis Riordan pleaded the case for Echols, arguing that Burnett misinterpreted the 2001 DNA statute to mean that new evidence was limited to evidence of guilt. 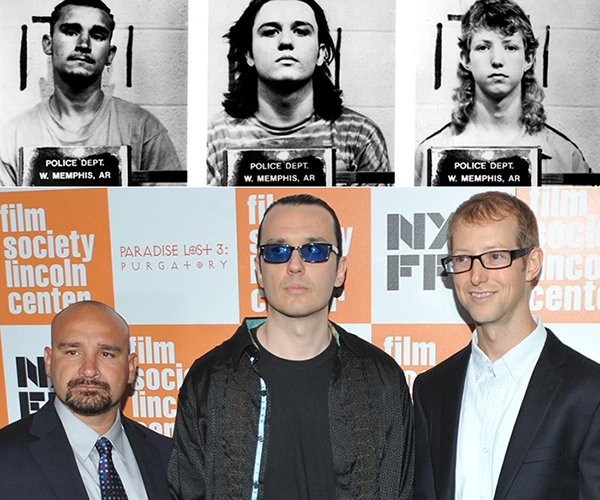 Then and Now: The WM3’s mugshot as children and post-release as adults.

Riordan says, “this statute was passed to exonerate the innocent. The Attorney General has taken the position that the criminal justice system is free of error and therefore is effectively divine. I quote from the brief in the circuit court, ‘The state does not shrink from Echols’ charge that relief may never be granted but embraces it out of confidence that the Arkansas criminal justice system does not convict the innocent.’”

In November 2010, the ASSC granted the WM3 a hearing to introduce all new evidence. The hearing was scheduled for December 2011. In August, however, attorneys Steve Braga and Patrick Benca contacted Arkansas Attorney General Dustin McDaniel and, in negotiations, the State agreed to accept an Alford plea from the three in exchange for their immediate freedom. Now being used more frequently in wrongful conviction cases, the Alford plea allows inmates to maintain their innocence while admitting that the prosecution might have enough evidence to convince a jury otherwise. For the state, it saves face and money, because it prevents the freed from suing the government.

Echols and Baldwin said they would continue to work to clear their names, something Baldwin said authorities aren’t trying to do.

“They’re not out there trying to find out who really murdered those boys,” he says.