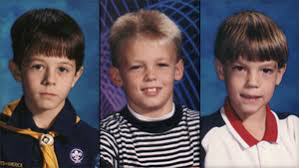 On May 5, 1993, three 8-year-old friends — Chris Byers, Michael Moore and Stevie Branch — went missing from a 4-acre forested area of West Memphis known as Robin Hood Hills. Witnesses said they had seen the boys going toward the woods between 6 and 6:30 p.m. Michael was riding his bicycle while Stevie was giving Chris a lift on the back of his bike. A search party looked for the children until dark when it became too difficult to traverse the rough terrain with its dense growth of trees and underbrush, briars, ravines and a wet weather creek that emptied into a drainage canal called the Ten Mile Bayou. The next afternoon, police found the boys’ bodies in that muddy creek. The children were naked and bound with shoelaces, the left wrist tied to the left ankle, the right wrist tied to the right ankle. All three victims had sustained blunt force trauma to the head. Drowning was the cause of death for Michael and Stevie while Chris had died from multiple wounds. The investigation went off track straight away, as incorrect information got out concerning the condition of the bodies. To police, it looked as if Chris Byers had been castrated and otherwise mutilated. Years later, experts would conclude that the bloody wounds were the result of animal activity after the boys were killed and put in the water.

A dearth of physical evidence was frustrating for the West Memphis Police Department, especially Chief Inspector Gary Gitchell. No one could find anything in or around the creek that would point them toward the killer or killers. Theories abounded, but one rose to the surface early in the investigation. Police listened to rumors about devil-worshipping rituals that were held in Robin Hood Hills. People in nearby neighborhoods said they had heard chanting.

The nation was in the grip of satanic panic, a phenomenon that had started with false accusations of child molestation against daycare employees in the 80s. The most famous case involved the McMartin preschool in Manhattan Beach, California, in 1983. A mentally disturbed mother of a child enrolled there made the initial accusations that the daycare owner and employees had molested children and taken pictures of the indecencies. In the next few years, such allegations were lodged against daycare workers in 46 other states. It was only after the children’s stories became so preposterous that the mass hysteria subsided. At a daycare center in North Carolina, a boy claimed he had been taken aboard a spaceship. Other children mentioned pirate ships. 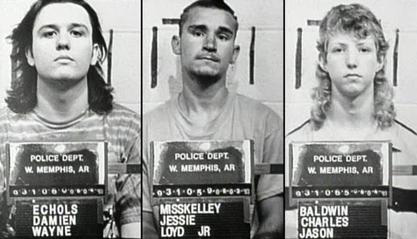 Crittenden County Juvenile Probation Officer Jerry Driver, however, took the idea of a satanic cult seriously and perceived it as a threat to all the God-fearing people of West Memphis, deep in the Bible Belt. He was convinced the community had a problem and knew just the person he thought would be the ringleader of such a cult. Damien Echols.

Driver and Juvenile Officer Steve Jones had been keeping an eye on the 18-year-old for more than a year. Echols had experienced run-ins with the law and had received psychiatric counseling. He suffered from depression and sometimes acted out. In another time or place his behavior might have been chalked up to teenage angst and rebellion against authority, but he was out of his element in West Memphis, Arkansas, a bastion of Christian fundamentalism. He was interested in Wicca, wrote poetry about death and other dark subjects, wore black all the time and enjoyed heavy metal music. He challenged conventional thought and was “goth” before most Arkansans knew what that was.

Echols’ best friend was 16-year-old Jason Baldwin. They had attended school together in Marion and both boys, coming from poverty-stricken backgrounds, were considered social outcasts. They lived in Lakeshore Estates trailer park and enjoyed hanging out together, listening to music and watching horror movies on TV.

Baldwin introduced Echols to 16-year-old Jessie Misskelley, Jr., but Misskelley was on the periphery, not forming close friendships with anyone. In Echols’ autobiography Life After Death, he described Jessie as having the “intellect of a child.” 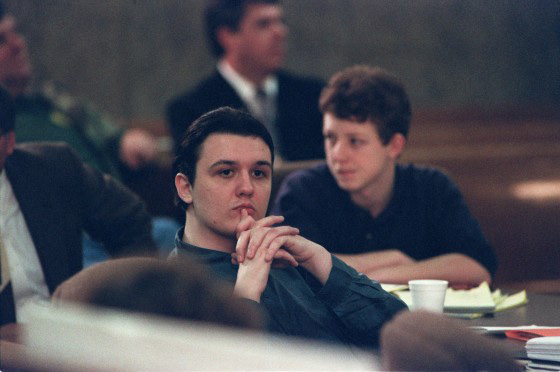 Eight-year-old Aaron Hutcheson and the murdered boys were classmates, and he said the four of them had sometimes gone into Robin Hood Hills where he claimed they secretly watched a group of men indulging in what police construed as satanic and/or sexual activities. This information came in handy for the boy’s mother, Vicki Hutcheson. Her employer had complained to Marion Police Detective Don Bray that she had committed fraud using a customer’s credit card, but when Bray discovered Aaron might know something regarding the murders, he dropped his questioning of Vicki and turned his attention to Aaron. Realizing her good fortune and wanting to please police, Vicki offered to help with the case. She knew Jessie Misskelley, Jr. and asked him to invite his friends, Echols and Baldwin, over to her place. Misskelley told her he didn’t know Echols very well but complied with her wishes. Hutcheson told police she discussed the occult with Echols and that he then drove her to an esbat which is a witches’ gathering. Echols didn’t drive or have a car, but police overlooked that fact, and they picked Misskelley up for questioning. Initially, he denied knowing anything about the slayings, but after 12 hours of interrogation without a parent or counsel present, he confessed and said Echols and Baldwin were the murderers and implicated himself as an accomplice. He got several details wrong. He said the victims were tied with rope, and he originally said the murders took place during school hours, but with detectives suggesting the correct time frame, Misskelley got that right after several tries. The inquisitors kept rehearsing what they wanted him to say until they were satisfied with the results. Miskelley’s almost immediate recantation came too late. It was a false confession coerced from a scared minor who didn’t have the mental capacity to understand what was going on. According to Wall Street Journal reporter Zusha Elinson, “Thirty-eight percent of exonerations for crimes allegedly committed by youth under 18 in the last quarter-century involved false confessions.” But Miskelley’s untrue declaration of guilt was enough to arrest Echols and Baldwin. The three young men became known as the West Memphis Three.

Echols and Baldwin were tried together, but Misskelley’s trial was severed. David Burnett was the presiding judge over both proceedings. A jury convicted Misskelley, but he refused to testify against Echols and Baldwin. Without Misskelley’s confession, Prosecuting Attorney Brent Davis and Deputy Prosecuting Attorney John Fogleman resorted to an amalgam of dubious circumstantial evidence; two knives, fibers and hearsay testimony. Neither knife could be connected to the defendants. The fibers were microscopically similar to items found in millions of households nationwide. The defendants had witnesses who accounted for their whereabouts when the murders occurred. Jurors, however, rejected corroborated alibis in favor of testimonies about satanic orgies and black magic.

Misskelley was sentenced to life in prison plus 40 years. Baldwin got life without parole, and Echols received the death penalty. For the next several years, Judge Burnett denied their appeals for a new trial. But eventually, it would be an earlier decision Burnett made that would turn the case of the WM3 into an international cause célèbre.