On April 23, 2007, Jerry Miller became the 200th person to be exonerated by DNA evidence. He had spent 25 years in an Illinois prison for a rape he did not commit. The first DNA exoneration in the United States occurred in Illinois in 1989. Since then, the number of DNA exonerations has continued to rise.

[dropcap]Wrongful[/dropcap] convictions are not rare, and the plight of the wrongly accused has been explored in numerous fictional accounts. Film director Alfred Hitchcock found the subject so compelling and fascinating that he used it as the plot in no less than seven of his movies, including “The Wrong Man” and “North by Northwest.” Today, Hitchcock’s protagonists could be freed with a lab test, and the guilty exposed.

In 1986, 17-year-old Richard Buckland was arrested on suspicion of murdering two teenage girls in Narborough, England. The case was known as the Footpath Murders because both victims were found near walking paths. The girls had been raped and strangled. Buckland confessed to the second murder, but luckily for him, DNA testing had just become available as a “genetic fingerprinting” technique. DNA from the semen found in both victims proved Buckland was innocent. He was the first person in criminal history to be freed by DNA evidence. Then a forensic team undertook the mammoth task of collecting blood samples from more than 5,000 young men in the area. Though at first disappointed by not finding a match, police heard that a man had told some drinking buddies that he had given his own blood sample in place of another man’s. This lead broke the case. Police questioned a baker’s assistant, Ian Kelly, who admitted he had been paid to impersonate a co-worker with the unlikely name of Colin Pitchfork. Pitchfork’s DNA was identical to that of the semen samples taken from the victims’ bodies. The jig was up, and Pitchfork was sentenced to life imprisonment. 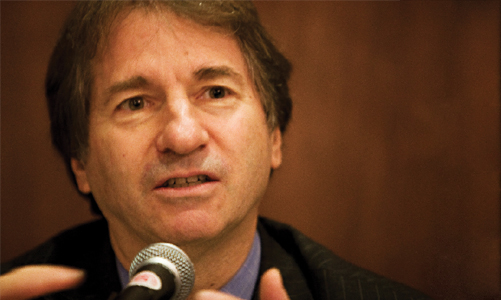 Barry Scheck, the co-founder and co-director of the Innocence Project said, “We are exonerating people who did not commit crimes, who have spent two decades in prison or time on death row, and when they get out, there are fewer re-entry services for these people than for individuals who actually committed crimes.” Of compensations, he added, “It’s a measure of decency.” (Photo by Lindsay Beyerstein)

For several years, DNA testing was available only to wealthy defendants and to prosecutors, who didn’t have to worry about the expense of such procedures. Gradually, however, that has changed, partly because of groups such as the Innocence Project, which works to free the wrongly convicted, including death row inmates. According to the Innocence Project, the average length of time served by the exonerated is 12 years. Thousands more have been cleared by DNA testing before convictions. It’s hard to ignore these statistics. As a result, more states — including Arkansas — have enacted laws that grant prisoners access to DNA testing.

In 1997, a Beebe woman, Arden Wilson, was accused of dumping the body of her newborn baby in a trash can in Vilonia, Arkansas. She was charged in Faulkner County with abuse of a corpse, a Class D felony. Her lawyer Cheryl Maples was quick to point out that Wilson had undergone a tubal ligation procedure 10 years earlier, and therefore could not have given birth. Authorities said the charges were based on DNA tests, which showed Wilson was the baby’s mother. When Maples pressed for more sophisticated DNA tests, H. G. Foster, the prosecuting attorney, agreed. Results of the second DNA test showed conclusively that Wilson was not the baby’s mother. The Virginia laboratory, used by the State Crime Lab, had miscalculated the initial DNA test results. Charges against Wilson were dismissed.

Besides crime lab errors, wrongful convictions occur for a variety of reasons, including unreliable testimony by police informants and incorrect eyewitness identification. False confessions, one of the least understood reasons, led to 25 percent of the wrongful convictions that have been overturned because of DNA evidence. Documented false confessions have a long history. Two hundred people confessed to the kidnapping and murder of the Lindbergh baby in 1932. More than 30 people confessed to murdering Elizabeth Short in the infamous Black Dahlia case of 1947.

False confessions may be elicited by coercion, by the inappropriate interrogations tactics by overzealous authorities, and by the diminished reasoning ability of the suspect due to exhaustion, shock or emotional trauma. Richard Ofshe, a sociologist at the University of California, has researched false confessions and found that mentally-deficient people are particularly susceptible to the phenomenon.

A controversial confession in an Arkansas case involved the largely-unrecorded interrogation of Jessie Misskelley, Jr., who is one-third of the trio known as the West Memphis Three — Misskelley, Damien Echols and Jason Baldwin. The three teenagers were convicted of the 1993 slayings of three 8-year-old boys in West Memphis, Arkansas. Echols and Baldwin were tried together and found guilty. Echols received the death penalty; Baldwin was sentenced to life without parole; and Misskelley was convicted in a separate trial and sentenced to life plus 40 years. Misskelley sealed his fate with a confession that he later recanted. Though his IQ was only in the low 70s, Misskelley was questioned without benefit of counsel for more than six hours … less than one hour was recorded.

On July 17, 2003, Illinois became the first state to pass a law requiring interrogations and confessions in homicide cases to be recorded from beginning to end. Other states have followed suit. Electronic recovering of interrogations helps both the accused by protecting their rights and protects law enforcement by preventing charges of misconduct. In New York, just after Christmas 2005, Erik Crespo, a teen suspected of attempted murder, turned the tables on his interrogator, Det. Christopher Perino, by secretly pressing the “record” button on an MP3 player Crespo had in his pocket. His lawyer used the tape in court to catch Perino in a lie. The detective was arraigned on perjury charges, and Crespo pled guilty to a weapons charge in a plea-bargain agreement.

Sen. Amy Klobuchar (D – Minn.), a former prosecutor, thinks the taping of interrogations and confessions is a good thing. “People talked about it being too expensive,” she said, “but I would buy a cheap tape over paying some of multimillion-dollar wrongful conviction judgments any day.”

Of the first 200 people exonerated by DNA evidence, about 45 percent have received some sort of compensation — ranging from $25,000 to $12.2 million — but the majority have received nothing … not even the customary bus ticket home. The exonerated may not have the skills necessary to re-enter the workforce. They may suffer emotional and physical problems, but seldom have insurance to pay for treatment. They may find it difficult or even impossible to re-establish family ties.