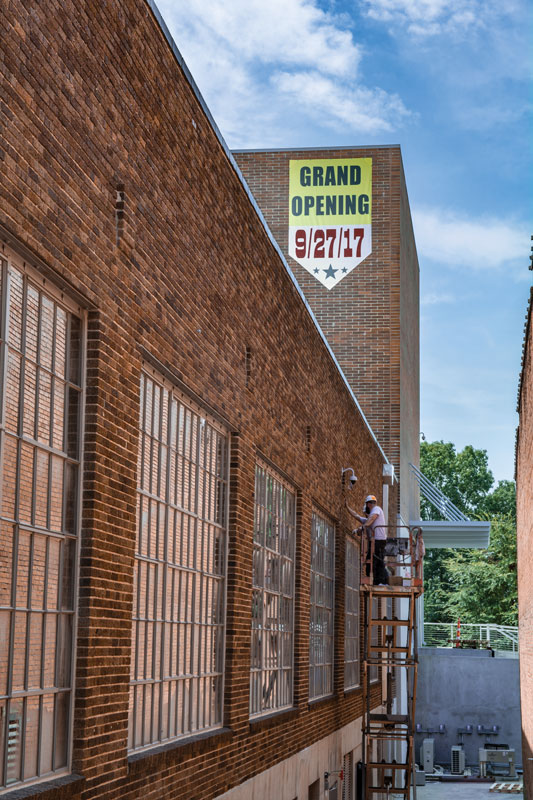 [dropcap]I[/dropcap]n a small town with a population of a little more than 18,000, it might seem like a lot to put $100 million into upgrading the downtown area. In simple terms, that might appear to be what’s happening in deep southern Arkansas. In reality, the investment is part of a long-term economic plan to change the entire culture of El Dorado in an effort to completely revitalize the town.

THE EVOLUTION OF EL DORADO

The town of El Dorado hit its peak in 1921 when Dr. Samuel Busey’s oil well erupted. The rural town was unprepared for the unexpected boom and population flood. In a matter of weeks, the population grew from 3,800 to more than 20,000. Within a span of 18 months, the population boomed to nearly 100,000. The small town was never the same. 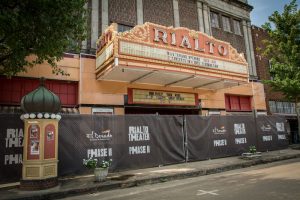 The Rialto Theater was built in the 1920s. It’s being restored and will be used for live music events, touring Broadway shows and feature films and will be the new home of the South Arkansas Symphony Orchestra.

In the 96 years since the town originally struck oil, El Dorado has changed dramatically. The oil boom stagnated, then suffered during the Depression and saw upheaval during the war years. After all this time, the three big corporations are still headquartered in the town, but many other companies haven’t been as fortunate.

The Texas-based Pilgrim’s Pride El Dorado plant closed in 2009, taking with it 3,000 jobs and delivering a big economic blow to the town.

Murphy says people would often ask his father why he stayed in El Dorado. “His off-the-cuff response was, ‘This is where our enterprises all started and we never had the good sense to leave.’” He might have been joking, but it was home for Charles Murphy and it’s still home for Madison Murphy. “It’s a pretty fabulous place to live,” he says.

Despite general decline, efforts to boost business, education and tourism have been in the works for years.
Richard Mason returned home to south Arkansas in 1974 after living in south Texas and Libya for 12 years. Richard, a geologist and successful oil and gas entrepreneur, along with his wife, Vertis, quickly got to work restoring and developing downtown El Dorado properties. At the time of their first purchase, building occupancy in the area was at 15 percent. The pair began to buy properties and open businesses. Their vigilant efforts paid off, and in 2009 El Dorado was awarded the top Main Street award for cities with populations under 50,000 nationwide.

The Amphitheater will hold up to 1,000 people and has reserved seating for 1,200. The great lawn will function as a park for public use.

MAKING STEPS FOR THE FUTURE

A few years earlier, in 2007, Murphy Oil embarked on an innovative education effort with the El Dorado school district. “A gentleman named Knox White walked into my office with an article about Kalamazoo, Michigan, and something called the ‘Kalamazoo Promise,’” says Murphy. The Kalamazoo Promise is a pledge by a group of anonymous donors who agree to pay up to 100 percent of tuition to any of Michigan’s state colleges or universities for graduates of Kalamazoo’s public high school. White’s idea was to reinterpret the concept for El Dorado’s public schools.

“A lot of people went to work on the idea, and ultimately Murphy’s management recommended the Promise and Murphy’s Board accepted it,” says Murphy. “That was phenomenal.”

Murphy Oil pledged $50 million in scholarships to El Dorado High School graduates. Each scholarship helps with tuition and mandatory fees that can be used at any accredited two- or four-year public or private educational institution in the U.S. The maximum amount payable is equal to the highest annual in-state tuition rate at an Arkansas public university. 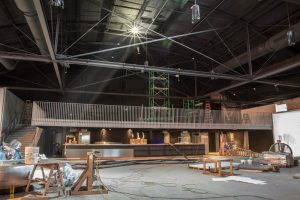 Inside the Music Hall: The Griffin Cabaret and Music Hall will seat 1,800 to 2,400 patrons when completed.

El Dorado Promise scholarships have been awarded to more than 2,000 students who have attended 129 different colleges and universities in 29 states from 2007 to 2016.

Before officials made the 2007 announcement to high school students, Murphy Oil Corp. kept the Promise a secret, says Richard Mason. “There were kids who never thought they’d have a chance to go to college and some of them just broke down and cried,” he says. “That was a big deal for El Dorado and it’s already paying dividends. People are now coming back to El Dorado with college degrees as part of the El Dorado Promise. Those folks had the vision of education being a key. And they put their money where their mouth is.”

“Soon after that, the city passed an economic development tax, then voters passed a millage and built a world-class high school,” says Murphy. “A number of positive things started happening. I can’t prove a negative of what would have happened or might not have happened had the Promise not occurred. I view it as somewhat of a catalyst,” he says.

In 2010, the City of El Dorado and a non-profit group called 50 for the Future commissioned a study by Seattle-based destination developer Roger Brooks. Brooks and his team developed a new economic plan for El Dorado after an intensive study of the city’s demographics, challenges, strengths and opportunities.
Brooks’ plan, which was primarily based on a case study of Ashland, Oregon and its renowned Oregon Shakespeare Festival, laid out actions to turn El Dorado into a cultural hub for music and art.

Brooks argued that El Dorado had better demographics than Ashland, says Mason. “In other words, if you draw a circle around El Dorado, there are more people within a 120-mile radius who can get to El Dorado than Ashland, Oregon, which surprised me,” he says.

It didn’t take long for Brooks to convince the powers that be that the project was their best viable option for an economic uptick. 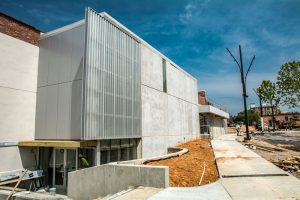 The original Griffin Auto Building, which has been remodeled into a music hall and restaurant, was built in 1928.

Native son Austin Barrow was the first to be brought onto the long-term project. Barrow, a drama and theater professor, was running the fine arts division at a private college in Georgia. “When I was approached about being able to move back to El Dorado and being able to utilize arts and culture as a method to have some sort of economic benefit for the city, it was kind of hard to say no,” says Barrow. “When I left El Dorado as a kid I never thought I would ever have the opportunity to go back. I had two theater degrees, so what am I going to do in Arkansas for a living? This was a unique opportunity.”

The next person brought onto the project was Terry Stewart, former CEO and president of the Rock and Roll Hall of Fame and former president of Marvel Comics. Within a year, they had raised $32 million. Initial contributions came from the City of El Dorado, the state of Arkansas and the Murphy Foundation, which contributed $5 million.

The primary goal was to raise the money needed to complete the planned two-phase project. The ultimate financial goal is $100 million. Phase one, which will be unveiled to thousands during the Murphy Arts District (MAD) grand opening on September 27, took $65 million to complete. It includes an 8,000-capacity outdoor amphitheater, the Griffin Restaurant (El Dorado’s first fine-dining farm-to-table establishment), the Griffin Music Hall and Cabaret and a 2,000-seat music hall with a four-story stage house. The restaurant and music hall are both housed in the historic Griffin Auto Building.

The five-day celebration will bring in top acts such as Train, ZZ Top, Lyle Lovett, Brad Paisley and Smokey Robinson.

After the inaugural MAD opening work is set to begin on the 2-acre children’s playscape. “It will be one of the largest play areas for kids in the state,” says Barrow, who is excited for his own children to spend time at the playscape. 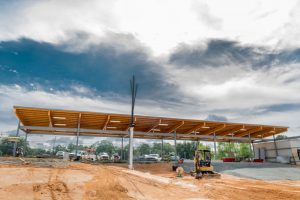 Pavilion space for a weekly farmers market surrounds the Amphitheater.

Phase two includes the restoration of a nearby 1930s-era building into an art gallery that will feature a 10,000-square-foot gallery for national and international exhibits. According to Barrow, the Walton Family Foundation has been instrumental in planning the space and there is a possibility that El Dorado could become the first place outside of Bentonville to feature works from the Crystal Bridges Museum of American Art. “They [the Walton Family Foundation] were also an early donor,” says Barrow.

The crown jewel of the second phase is the reopening of the Rialto Theater, which was built in the 1920s. El Dorado Festivals and Events purchased the Rialto from Richard and Vertis Mason, who had done some previous renovations. At one point, it was a working movie theater and at its closing the lobby was used as a bar called Marilyn’s at the Rialto — an ode to Marilyn Monroe.

“The night before my wife and I got married, we sat in the balcony of the Rialto and talked about what we were going to do when we were married,” says Mason. The building and the theater mean a lot to the Masons. The structure is listed on the National Register of Historic Places. “We’re excited about the $20 million restoration.”

Starting on September 27, MAD executives are hoping around 20,000 people will pour into the small town to enjoy the celebration, big musical acts and irresistible new food. There are a few issues that have not quite been worked out yet; they could turn into real issues if there is a large influx of people. There aren’t many hotels in El Dorado, and there are none in the downtown area. Parking could also be a problem. Many nearby colleges will be bringing students on buses, and the county sports complex and other areas will be supplying their parking lots for use. Barrow feels that MAD has most of the parking figured out and he hopes local residents will use their entrepreneurial spirit to supply the rest.

He’s optimistic for accommodations as well. Hotels in nearby towns are expected to be full. The goal is that next year new hotels will come to El Dorado to fill the need.

Madison Murphy agrees with Barrow. “This kind of investment will spark private capital to be deployed there, like hotels, restaurants and shops, and hopefully that’ll also improve the quality of life and it will become a very appealing business environment,” says Murphy. “I personally think that El Dorado Festivals and Events, together with all these other initiatives, like the Promise and the quality of a quintessentially charming downtown, makes El Dorado an extraordinarily attractive place to live, work and play.” 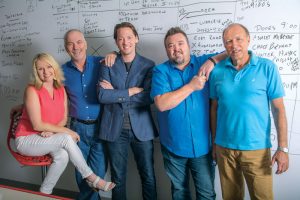