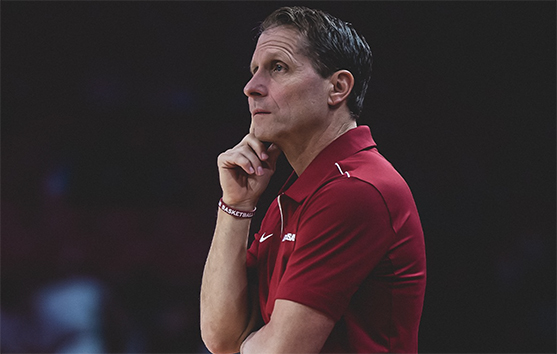 I found my social media post from a year ago this week when Arkansas hired Eric Musselman as its men’s basketball coach. Cautiously optimistic is what I’ll call it. Like many media types, I was a bit surprised by Musselman’s emergence as a top candidate but intrigued with the possibilities considering his NBA pedigree and success at Nevada.

A year later, Musselman has proved without a doubt he was the right hire and has Arkansas’ basketball program headed in the right direction.

He impressed me in four ways this season. Those four factors have me believing the Hogs will not only break their 24-year Sweet 16 streak in the NCAA Tournament but make a Final Four appearance soon. Yeah, I said it.

When the college basketball season was suspended last month, Arkansas appeared to be an NIT team although they were still alive for an automatic NCAA Tournament run if they had made an improbable SEC Tournament jaunt before it was canceled after a first-round win. However, even getting that team to the NIT was an accomplishment. Overall, the squad was not overly talented and was not mentally tough a season ago.

Musselman’s keen awareness and no-nonsense approach improved each player individually. He transformed Mason Jones into a superstar and turned Adrio Bailey from mediocre to a contributor. The team played well together and if star guard Isaiah Jones hadn’t missed several late games due to injury, Arkansas most assuredly would have entered the SEC Tournament with a Big Dance invite locked in.

Fans that witnessed a turnaround without a surplus of talent probably wondered what Musselman would do with a roster loaded with talent and depth. They won’t have to wonder much longer. Musselman landed one of the better recruiting classes in school history and will have much-needed help on the glass in the form of 7-foot-3 Cal transfer Connor Vanover.

Jaylin Williams, a 6-9 freshman from Fort Smith Northside, should help, too. He was impressive in the games I saw him play this season, including in the Class 6A state tournament. KK Robinson is among the nation’s top point guards and Moses Moody and Davonte Davis are dynamite on the perimeter. There’s no reason to doubt with the tutelage of Musselman, this group will make major contributions next season. If Joe does not declare for the NBA Draft, he will add the leadership the team needs. But even if he departs, the depth and talent will be so much greater that it may not matter.

Musselman’s NBA background showed through in preparing for opponents. In the NBA, teams play most every day, so coaches have to prepare efficiently. Musselman definitely showed that knack as his overmatched teams played well in most games, even on the road. He showed an ability to implement a game plan and make in-game adjustments. He showed he is very savvy and can convey the plan to a team, even one that may not be as talented. That should be very encouraging to Hogs fans.

The final factor that really caught me off guard is Musselman’s marketability. If there is a coach that handles social media better than him, I’d like to see it. Plus, he involves his entire family. The bits he has filmed for Twitter during COVID-19 are gold. His savvy has paid off two-fold. First, recruits love the fact that even in his 50s, he is hip and relatable and that his wife Danyelle, and young daughter Mariah, are so visible. That portrays a family atmosphere and young players leaving home for the first time take note of those things. His gregarious personality is also appealing to fans. Musselman could be one of the more popular coaches on campus with students and older fans alike. Winning is obviously key, but a winning personality can really drive the popularity of a program. Musselman has proven he has charisma and isn’t afraid to interact with fans and show emotion doing it.

All of these components were hard to imagine a year ago, yet all are intact and showing great promise. In Year 2, everything is in place for the program to make a marked jump and reclaim its place among basketball elite as long as Musselman is on campus.

READ MORE: Four Reasons to Be Excited About Eric Musselman