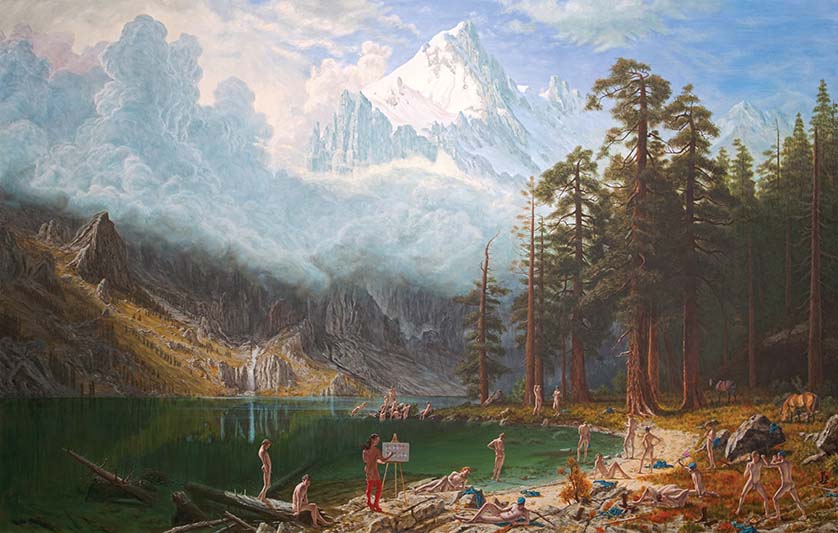 By Antoinette Grajeda | Photos courtesy of MONAH & Crystal Bridges
Lady Justice is keeping a watchful eye over the downtown Bentonville Square. In a new mural, the iconic figure’s blindfold is lifted slightly above her right eye so she can peer out over passersby. Juxtaposed over the image is a sword coming down with what artist Yatika Fields calls “the swift action of justice.”
Fields incorporated the image into his large artwork to honor Cripps Law Firm which allowed the Tulsa-based painter to use their building’s western-facing wall as his canvas. Fields, who is Osage, Cherokee and Creek, also embellished the mural with adornments pertaining to his Native American heritage. 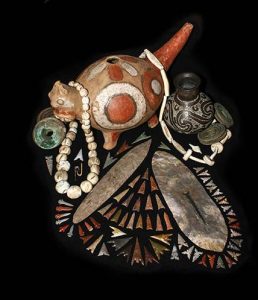 “It’s a mixture of imagery and touches based on social context,” he says.
Adding to the discussion is the proximity of the mural to a Confederate statue located in the center of the downtown square.
“This mural kind of alleviates ills due to that, and it faces that as well,” Fields says. “So with the sword and with the blindfold open facing that, it directs this message right to that, but also takes away from it.” 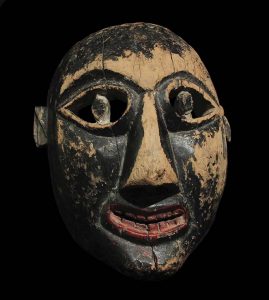 Sharing the Native American Narrative
Native Americans have impacted the Arkansas landscape and culture for centuries. According to the Encyclopedia of Arkansas, the first encounters between Europeans and tribes living in what is now Arkansas occurred in 1541 when Hernando de Soto’s army camped on the eastern side of the Mississippi River. Following the army’s departure in 1543, no further written accounts describing the Arkansas region were produced until the 1673 voyage of Jacques Marquette and Louis Joliet.
Indigenous communities observed by eighteenth-century colonists include groups that still exist, like the Quapaw and Osage who lived in villages with distinctive forms of organization and traced their ancestry through the father’s line. The Caddo, who lived in the southwest part of the state, traced their ancestry through the mother’s line and named their clans after animals.

The stories of these tribes continue to be told today by the Museum of Native American History in Bentonville. Curator Matt Rowe says the museum is unique in its effort to tell the full story of indigenous people living in all of the Americas.
MONAH was established in 2006 as the Museum of Native American Artifacts. The collection outgrew its space in downtown Bentonville and the museum opened in its current home on the west side of town in June 2008. David Bogle, a registered member of the Cherokee Nation who was born and raised in Bentonville, founded the museum. MONAH has an estimated 10,000 artifacts, many of which come from Bogle’s private collection. 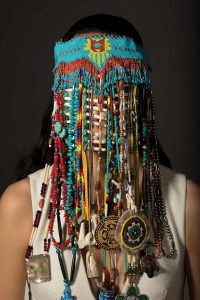 “We have a lot of items that are very rare, that are very special,” Rowe says.
The museum is working to dispel myths about Native Americans. Rowe says the stereotypical image of feathered headdresses and teepees is a very narrow representation of the people who have inhabited the Americas for thousands of years.
“That only happened in a small part of the United States, the High Plains, and it only occurred for a small period of time, 150 years or so,” Rowe says. “Now whenever you think about 14,000 years of prehistory and history, that’s kind of a drop in the bucket.” 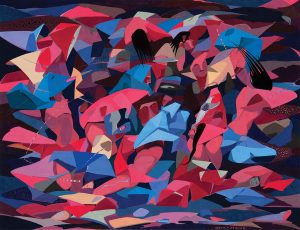 Dance of the Heyoka.

He says the Hollywood stereotype portrays Native Americans as ignorant savages, but they were quite intelligent. As an example, Rowe points to a weapon called the atlatl, which acts as a lever to throw a short spear that he says was far more devastating than a bow and arrow and easier to use.
In addition to weapons, the museum also has stone tools, pottery and textiles on display. In 2017, the museum saw 45,000 visitors, including 5,000 school children.
“They’re our future, and they’ll see a lot here they won’t see in history books,” Rowe says.
MONAH provides additional education by hosting events throughout the year including its annual Native American Cultural Symposium. Rowe says educating the public about Native American history is essential. 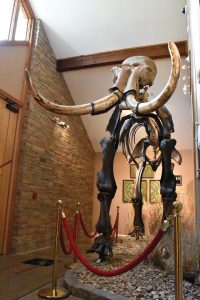 “People have this visual in their mind of this, and it’s incorrect,” Rowe says. “They don’t realize just how brilliant these people were and what they had to go through.”
Weaving Together Past and Present
Other Bentonville venues are also honoring Native Americans who once inhabited the region. Addie Roanhorse, a graphic designer, mixed media artist and resident of the Osage Nation, is helping with design elements of the Momentary, a satellite venue for Crystal Bridges Museum of American Art that’s under construction.
“I was kind of taken aback just because I’ve had so much respect for Crystal Bridges and what they’ve done to the middle of the country when it comes to arts,” she says.
Inspired by traditional Osage attire, Roanhorse has created a simple form, a series of triangles reminiscent of arrowheads. The patterns will be etched into the building’s entryway, loading dock and elevator tower glass and will play a functional role in filtering light.

The Momentary is scheduled to open in 2020, but Crystal Bridges recognizes Native American artists today. In October, the museum debuted its newest temporary exhibition, Art for a New Understanding: Native Voices, 1950s to Now. The exhibition, which is on view until Jan. 7, features around 80 paintings, photos, sculptures, textiles and videos.
Curator Mindy Besaw says it is so essential that Native American artists have a voice when it comes to contemporary art.
“It’s a voice that’s often not been prioritized or included,” Besaw says. “And so we feel so strongly that it’s so exciting to have about 40 artists and highlighting work that has made a big difference even in the stories of American art and Canadian art from the past 70 years.” 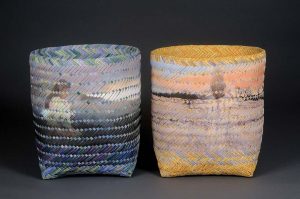 Besaw says she hopes museum visitors will be pleasantly surprised when they view the exhibit.
“Really hitting home that idea that Native American cultures are vibrant and all around us today and these artists have just as much to say and are just as good as any contemporary artist out there working today,” she says.
Some of the artworks are so contemporary they were created specifically for this exhibition. One example is Yatika Fields’ mural on the Bentonville Square, which Besaw says was designed in conjunction with Visit Bentonville and the Walton Family Foundation.
Fields says an exhibition like this is compelling because it furthers the discussion of Native American art and how to include it in contemporary galleries.
“That’s what it’s about—dialogue and education,” he says. “That’s how we get to understand things and move forward. So I think Crystal Bridges is doing a great thing and it’s a beautiful exhibition, and I think it’s going to do a lot of wonders.” 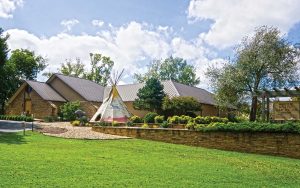