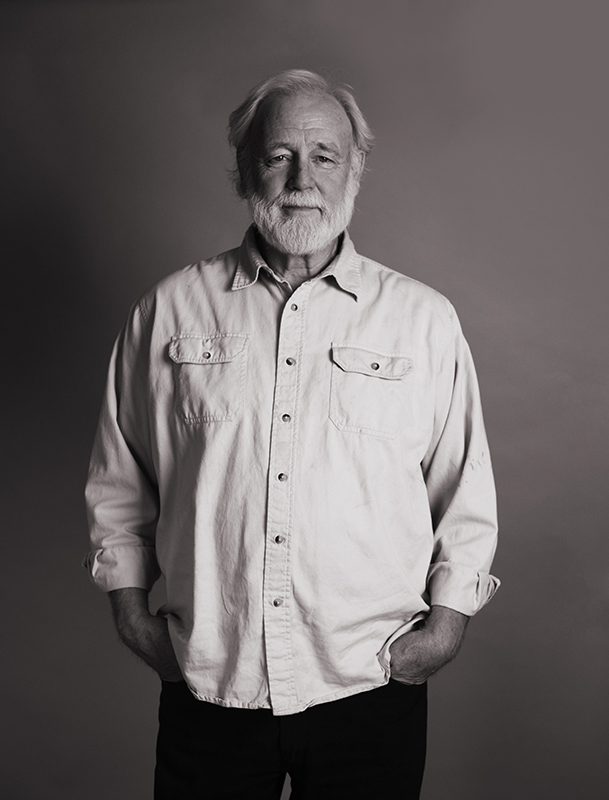 [dropcap]F[/dropcap]or most people, a stroll through nature can be almost mundane. The grasses sway in the breeze. Ripples disturb still waters. The shadows grow long in the afternoon. For most of us, this is just everyday life, something we take for granted — not so for William McNamara.

The artist has gained recognition over the years for his highly detailed works of forest scenes and the countryside. From a distance, the pieces border on photo realism, but upon a closer look, patterns emerge, displaying a subtle abstraction. It’s these patterns and colors that draw him into an image in the real world. Once he starts to explore this through art, colors can change, emphasis in the composition can shift.

“I don’t think about how I’m going to do this [when I start],” says McNamara. “Sometimes you just have to figure out ways to do grasses and make it complicated. The patterns come out. It’s still a mystery to me. I don’t know why I make the choices to make it more realistic or make the abstract strokes. I have no story to tell. The painting has to have a presence.” 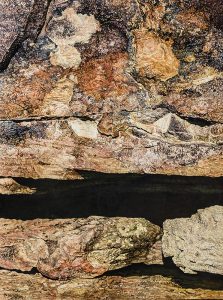 As a child, McNamara found inspiration in his mother’s efforts. Although an amateur painter, she also worked in a creative field as a photography retoucher, essentially the original Photoshop. He attended Centenary College of Louisiana in Shreveport and majored in art and math. Eventually, numbers no longer held their appeal, but his passion for art only grew stronger and he shifted his emphasis to this, along with studying English.

After graduating, he taught art at Centenary for a few years, growing his network, developing his style and having occasional exhibitions.

“You learn a lot teaching,” he says. “I just slowly developed this style I work with. I was an abstract painter in college. When I went to college, I painted as impressionist, expressionist — I just tried anything out.”

He found early inspiration in Elliot Porter, one of the original color photographers who took nature pictures with patterns. But this came after an ‘aha!’ moment in 1970 near Big Wood River by Ketchum, Idaho. McNamara set up his tools of the trade and worked for about nine hours. He didn’t start with the style he currently has; it was more of a sketch. But he learned to focus on letting himself respond to his feelings and ideas rather than having a firm plan for a work.

“I think of it as more of a way of me creating color, patterns and shape on the paper,” he says. “That’s more important than recreating a spot or location. Sometimes I call my work “abstract realism.” The ones I like the most, at least. Sometimes I wonder — do we have an abstract sense? Did primitive man say, ‘Ooh that’s a nice pattern’ or did we develop that?” 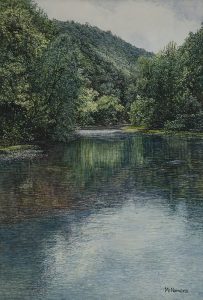 In the early 1980s, McNamara moved to northwest Arkansas as an inadvertent “back-to-the-lander” because he wanted his kids to grow up as he had. He built a house with raised gardens and just about anything you could think that comes with such a rustic lifestyle. At this point, he made his living as an artist. Over time, he has developed a reputation and following that have kept him in business.

He works an average of four hours a day and, given the details in his larger works, can spend several months on a piece. His technique differs from that of traditional watercolor as he keeps the paper fairly dry and works vertically to prevent the paint from running. He can sometimes spend days working on a section. He says, “I was an oil painter in graduate school; that’s what my degree is in. My watercolor style is based on that — layering and such. Sometimes it can have a dozen layers. This creates much more complicated colors than you get with regular watercolors.”

He only works with four pigments and usually starts with sepia as a brown to sketch the composition. Then he brings out the dark spots and patterns, slowly adding color and working his way up. He moves around on the paper constantly to maintain balance and prevent one side of the image from becoming too dominant.

McNamara is not one to do different series like other artists, but rather views his overall body of work as one continuous project.

“I don’t know what the end of it is,” he says. “I enjoy seeing [paintings] a couple years later, framed, and, to tell you the truth, I had no idea I’d get to the point I have with controlling the brush and the water. I know what they mean about being one with your brush now.” 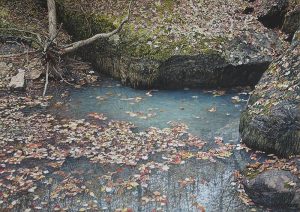