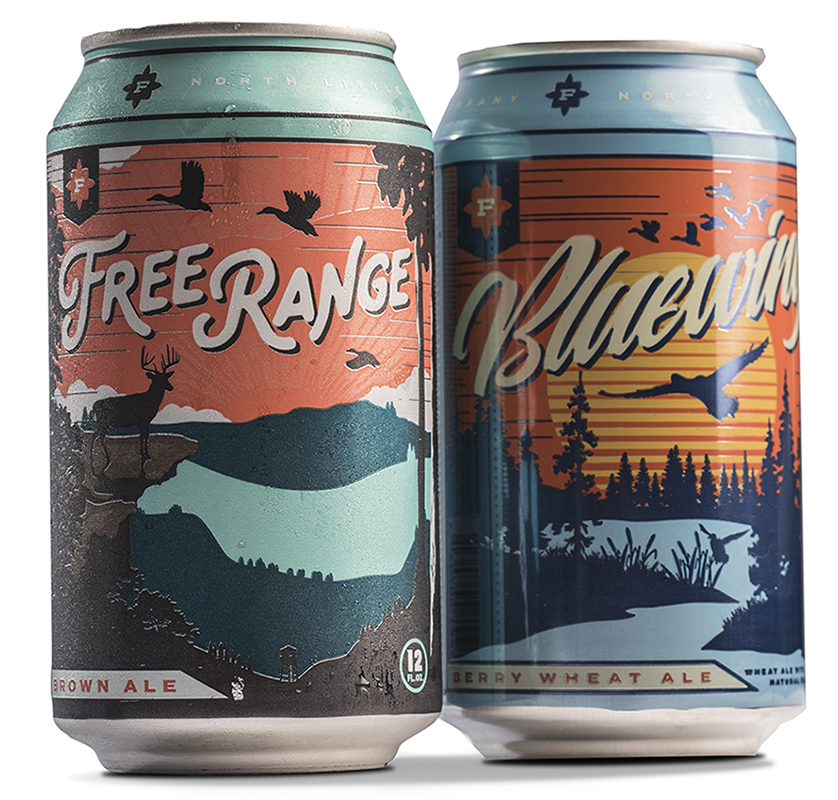 By Chris Price  |  Photography by Jamison Mosley
With its craft breweries growing, Little Rock is emerging as a beer lover’s destination.
[dropcap]W[/dropcap]ithin the last five years, Little Rock has become a hub for Arkansas’ craft beer industry, as several breweries with adjoining taprooms and restaurants opened after laws were adopted to enhance their opportunities for success. With the capital city now home to nearly 10 commercial craft breweries varying from larger-scale facilities with packaging and multi-state distribution to single-source locations inside restaurants, craft beer production has more than doubled since 2013. The industry is poised for continued growth as several breweries are increasing production and looking to expand distribution across the state and beyond. 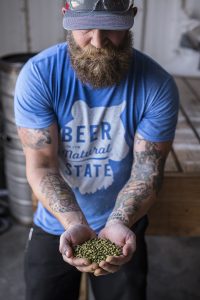 Four Basic Ingredients
Beer is made with four basic ingredients: water, grain, hops and yeast. According to the amended Bavarian Purity Law of 1516, that’s all that’s needed. With hundreds of varieties of grains, hops and yeast, however, the combination of those ingredients — not to mention additives like fruit, honey, coffee and more — can render an almost unlimited number of pilsners, lagers, ales, stouts and ciders in a spectrum of golds, reds and deep browns and flavors that are pleasurable for nearly any palate. Little Rock breweries are producing hundreds, if not more than 1,000 different beers. Some brews are menu mainstays, but the vast majorities are seasonal, small-batch or limited-edition beers available only at a taproom or local beer festival. 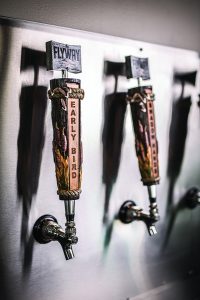 Garage Bands
The American craft beer industry is booming as consumers are looking to get the freshest beer from as close to home as possible. At the turn of the millennium, small restaurants including Vino’s and the former Bosco’s were the standard bearers for local brews. Diamond Bear Brewing Company, launched in 2000, stood alone for more than a decade before Little Rock’s craft beer movement blossomed around 2013, when several home brewers including Flyway, Stone’s Throw, Rebel Kettle and Lost Forty began commercial production.
Ian Beard, a co-founder of Stone’s Throw, met his three business partners in the Central Arkansas Fermenters homebrew club.
“We were all home brewers who had been brewing small-batch beers for about a decade each,” Beard says. “After the Great Recession, this looked like as good as an investment opportunity as stocks, bonds or any of that kind of stuff. Some of us wanted a career change, and we were willing to entertain the idea of ‘let’s see what happens.’” 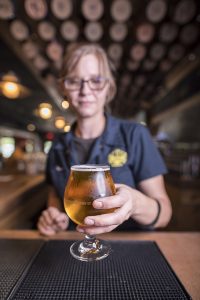 While the increase in the number of craft breweries seems like it would be detrimental to others already in the industry, there is an esprit de corps among the local “beer community”-minded brewers, who have welcomed the additions and even worked together on cross-brewery specialty beers.
“The last five to 10 years, there’s been an explosion of breweries,” says Diamond Bear founder Russ Melton. “Of course, there are positives and negatives to it.”
The negatives are self-evident: There are only so many placements available to the growing number of tap handles, which means fierce competition for market share. And while technically competitors, they see large, domestic and international industrial brewers as their main foes.
“There’s more people out in the market talking about really good local beer. That brings the emphasis off of industrialized, mass-produced beers,” says Melton. 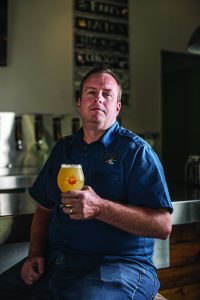 Location, Location, Location
Most of the city’s breweries are situated on either side of the Interstate 30 corridor. Several are located downtown, two are right across the Arkansas River and the remainder are in the up-and-coming East Village neighborhood south of the Clinton Presidential Center and the Arkansas Democrat-Gazette.
“We have eight breweries within walking distance that people can go back and forth between,” says John Lee, Rebel Kettle’s founder and head brewmaster. “It’s really helping to create a beer culture here.”
The proximity of the local breweries has created an attraction, giving benefits and positive effects on other industries. 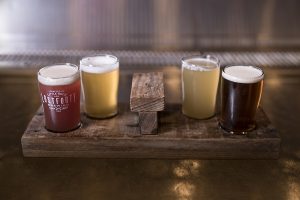 “I’ve always said no one goes to Napa Valley to visit a winery,” Melton says. “They go to visit a bunch. The more good, quality craft breweries we have here will be a win-win for tourism and the breweries themselves.”
An “Experiential Element”
With a capacity to produce 25,000 31-gallon barrels annually, Lost Forty Brewing is the largest craft brewer in Arkansas. Founder John Beachboard says the local industry is growing because there is an “experiential element” in craft beer that doesn’t exist with mass-produced brews trucked in from other locations. 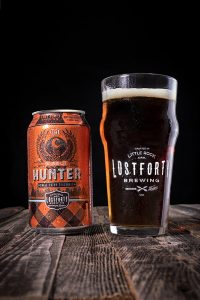 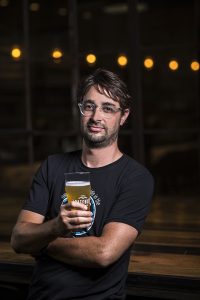 “You can actually go to the brewery and see the beer being made and talk to the people who make it,” he says. “That grows the number of advocates and ambassadors of craft beer and the local beer culture.”
Most of the breweries have taprooms that serve as a restaurant or a living room to the brewing spaces. They are generally family- and dog-friendly, where patrons may sample brews alongside food offerings and retail shops with T-shirts, hats, mugs, growlers or beer jugs, kegs and cans to-go — even on Sundays. 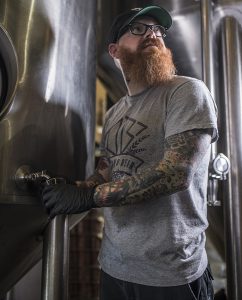 Diamond Bear was the first on the scene in 2000.

Creating an Identity
An additional element of the craft beer industry is the focus on branding the brewery as well as each product offering with individualized names, fonts, images and logos that go beyond the label to merchandise, including beer glasses, shirts, hats, stickers and more. Many local beers carry Arkansas-centric names, including Razor Bock, Pinnacle India Pale Ale (IPA), Pig Trail Porter, Razorback Rye Pale Ale (PA), Quapaw Quarter Porter, Riverdale PA, Presidential IPA and Two-Term Presidential Double IPA.
“It takes a lot of time, but it’s really rewarding, and it’s lots of fun,” says Beachboard. “It pays off because people see the creativity and work that goes into it. They like to be in on the fun and represent the local breweries and beers, too.” 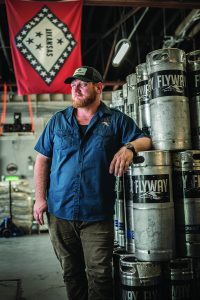 Going Yeast Mode
Little Rock beers are proving popular with consumers, and their success has several brewers either having recently moved to bigger facilities or in the process of acquiring additional space to expand operations.
“It’s neat to see craft beer growing in Arkansas,” says Jess McMullen of North Little Rock’s Flyway Brewery, which has increased its production in several stages since it started commercially in 2013 and collaborated with other local breweries on special small-batch brews. “When you see Little Rock breweries grow at the rate that they’re growing, it means good things.”
Lee says Rebel Kettle is on the verge of adding a 50,000 square-foot facility that will house production and packaging in addition to their current 5,800 square-foot taproom location. That will increase the brewery’s production from 800 to 5,000 barrels a year, with full capacity at nearly 50,000 barrels annually.
“We’re selling more beer out of the taproom than we can make,” Lee says. “Right now, we’re just trying to keep up with demand.”
After packaging disruptions limited their production to 4,000 barrels in 2017, Melton says Diamond Bear switched from bottles to cans and is again ramping up toward their 10,000-barrel capacity.
Last fall, three years after opening in 2014, Blue Canoe Brewing Co., added a 20,000 square-foot warehouse production facility to their original taproom location.
Although the market may seem saturated, the brewers say there’s a lot of room for growth. In 2017, Arkansas’ local breweries produced 47,000 barrels combined, while 1.9 million total were consumed, says Beachboard.
“I think it’s really impressive what craft beer in Arkansas has done over the past couple of years,” says Beachboard. “We’re worlds better than we were five years ago, but the math shows Arkansas craft beer is a small segment of the market. We still have a long way to go to close that gap.” 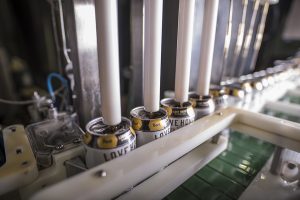 Lost Forty Brewing has the capacity to brew 25,000 barrels of beer.