New in Town: Through the Forest Lies a Tree in Cypress Social

“Casual, Southern food with no attitude.” That’s how the acclaimed interior designer, Garry Mertins, sums up the vibe of Central Arkansas’ latest culinary venue, Cypress Social, the newest creation of local restaurateur Jim Keet and his sons Tommy and Jake. And like all of Keet’s endeavors, this one is the perfect blend of hospitality and food. 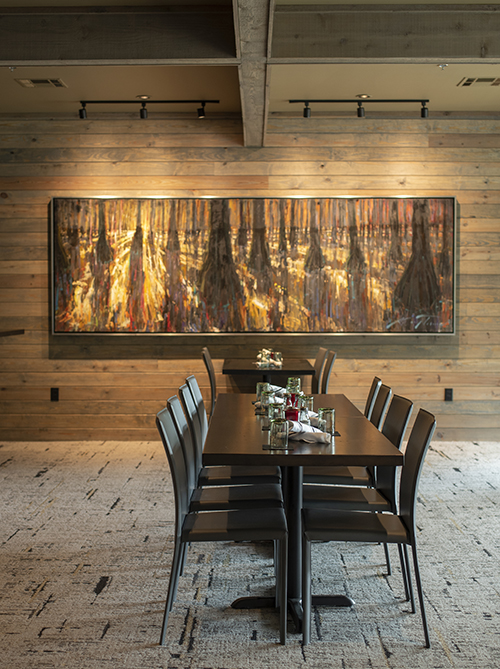 Mertins has been around the block a time or two. He’s lent his artful eyes and creative hands to plenty of spaces over the years — homes, apartments, restaurants. Mertins was behind the aesthetic of Petit & Keet’s inception just three years ago, a Little Rock restaurant unearthed by the same cast of characters as Cypress Social. And while Mertins likely feels a paternal attachment to every project he designs, it’s hard to miss an even fonder tone now as he enthusiastically describes Cypress Social.

He’s animated about the windows, ardent about the ceiling beams. He speaks affectionately about the bathrooms, with enamor over the bar. Mertins was so enthralled by this creation that he implored local artist Barry Thomas to come get a glimpse of this canvas before the doors were even open. It left such a similar impression on Thomas that he immediately got to work on a 4-foot-by-12-foot custom painting to dress one of the walls — a landscape of cypress trees. 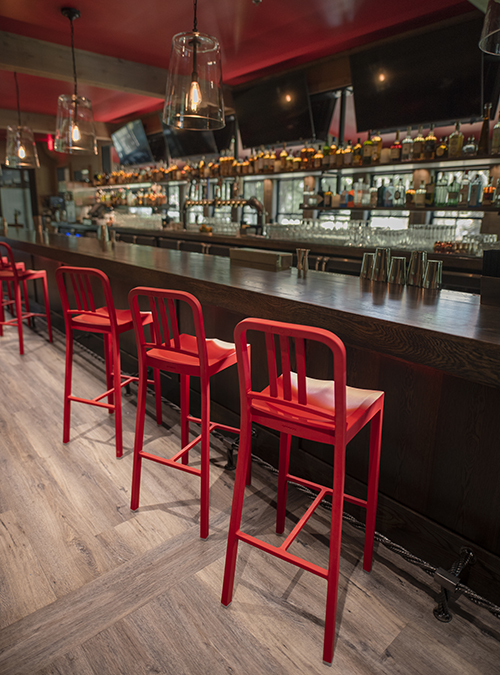 The red bar stools and ceiling add a pop of color to the bar.

People aren’t ordinarily so enraptured by a new restaurant; some months (minus a pandemic), it seems that metros like Little Rock and burbs like what surrounds it get a new one every week. But therein lies the honest truth about Cypress Social: It’s not just any other new restaurant. It has a soul — built by every hand that brought it to life.

But this soul existed before; it was just a little downtrodden by wear and tear. Cypress Social occupies the former landmark of the North Little Rock side of Maumelle Blvd., Cock of the Walk. The new team in charge of the building would seek to turn it into something new, without giving way to its approachable familiarity. 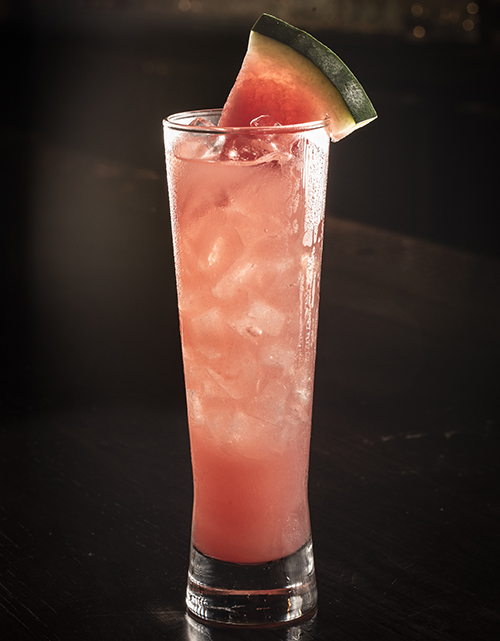 “It had been years since I’d been out there,” Mertins says of the space. “The day we went out for a walkthrough, I was like, ‘This place has some real potential.’ I looked at it as a diamond in the rough.”

That preemptive visit to the location to see what sort of project was in store would soon involve an ensemble cast of legends in the Arkansas food game — the Keets of JTJ Restaurants, LLC; the muscle of Keet O’Gary Construction; the delectability of Ben E. Keith Foods; the design of Garry Mertins; and the visionary management style of Brent Lenners, operating partner of Cypress Social. 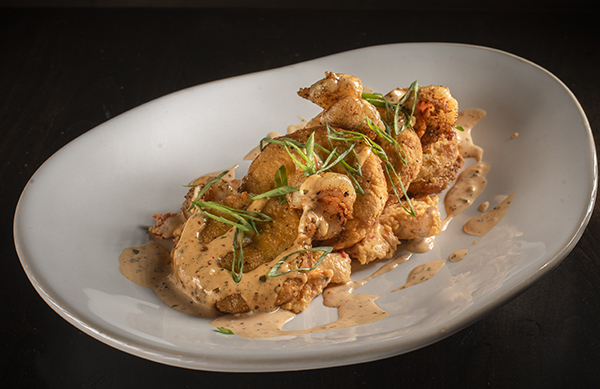 “Originally, we were just going to move Keet O’Gary Construction over here and use the rest of the space for an event center,” says Keet, head of JTJ Restaurants and Keet O’Gary Construction. “But when we came over here and bought the site, we started having so many guests request that we put a restaurant in the Maumelle/North Little Rock area. So we started analyzing the market, and what we determined was that there is a real market for a destination type restaurant in Central Arkansas — there really isn’t one. Petit & Keet has been a tremendous success for us, and we’ve been recognized locally and nationally, but this is a completely different kind of venue. Once we made that decision, we started the construction.”

Together, the joint force began an 18-month-long odyssey in creating something new out of something old, without the novelty becoming a hollow shell with merely four walls and a few Southern dishes. That’s been done before. 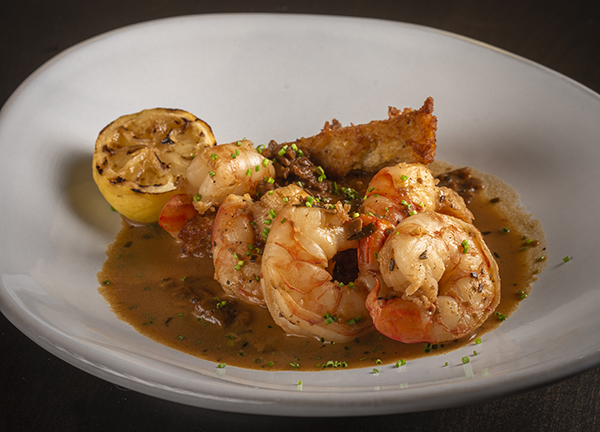 One of the most consequential decisions in encapsulating an essence was in the gutting of the building. Visitors to Cypress Social might misunderstand what occupies Cock of the Walk Ln. today as new construction. While the renovation by Keet O’Gary Construction and Mertins was thorough and very nearly a complete overhaul, it was not a simple tear down and rebuild from scratch. Instead of chucking to the trash what came before, this team harvested and salvaged what it could — mainly, the original cypress wood of the existing structure. It wasn’t always planned that way; it was an in-the-moment pivot, according to Mertins, that became the very fulcrum for what it is and the reason behind the name.

“We put the cypress wood throughout the restaurant — the entry foyer, the hallways and the main dining room are all cypress wood,” says Jim Keet of JTJ Restaurants and Keet O’Gary Construction. “And then we brought in knotty pine from California so that it would be compatible with the cypress wood. With the exception of the cypress, every single piece of wood, and the entire structure, is completely brand new. We’re really pleased with how it’s turned out.” 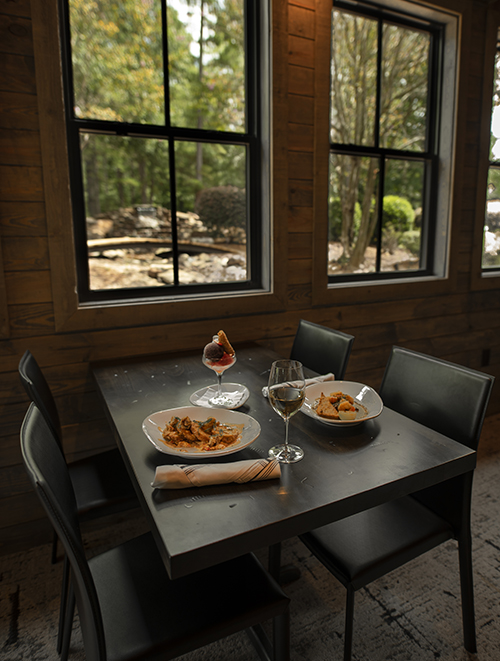 Both Keet and Mertins often fall back on the same descriptor when talking about the venue: destination. Neither set out to create just another place to sit down and have a meal. Cypress Social could be that — and it very well is — but it also needed to be something more. A place that could be both a casual environment with no formal dress code but also a place elegant enough for a bride and groom to host a reception in its private dining hall; somewhere that was suitable for a weeknight dinner with the family but also for a 25-year wedding anniversary. It’s no small feat to tiptoe across those lines so delicately, but it’s exactly what the team accomplished; team being the keyword there, as Keet so proudly and humbly will remind.

It’s within this same balance that Ben E. Keith, the Keets and executive chef Steve Binotti were able to also find harmony. “We were extremely excited to be a partner on this project,” says Rusty Mathis, the general manager of the mid-south division of Ben E. Keith. “We have supplied for all of the various Keet family concepts for a dozen years or so. We have built an amazing, transparent collaboration that works to ensure both of our successes.” 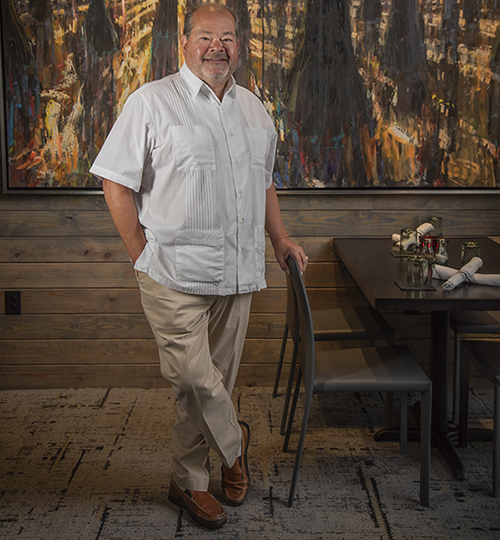 The food menu is made up of plenty of up-scale dishes: a sous vide beef filet, redfish Pontchartrain and oysters cozily resting on half shells. But there’s also the restaurant’s juxtaposed, elegant take on the no-frills, blue-collar fare that is Southern cuisine: homemade cornbread, Delta-style tamales, fried green tomatoes, shrimp and grits, corn fritters and fried chicken. Each dish more delicious than the last; each fit for any occasion, any demographic.

Such a perfectly crafted menu does not happen overnight, especially when considering the high standards that a product of Keet’s is held to. “We had taste panels for months, literally, getting all the food right,” Keet says. “The food is unique and beautiful and delicious.” 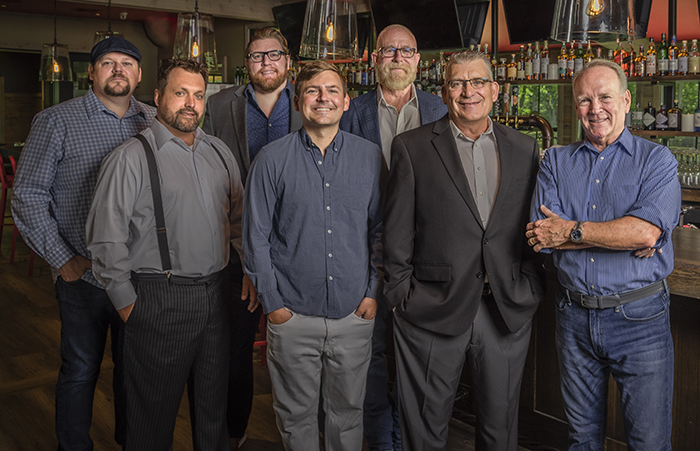 But it’s a destination also for its setting — centrally located in the state as a proper venue for an event or gathering of any kind, while also being within driving distance of a meal or cocktail for anyone in the Central Arkansas area. And it’s the beauty of looking up from your entree, out the windows (that “disappear at night,” according to Mertins) onto a serene lake; as if Cypress Social — which already had everything going for it — needed that picturesque cherry on top. But it does: Just like a chocolate sundae, it’s the blend of all the ingredients that elevate it to a level all its own.

And if you think it’s a sight during the day, you must lay eyes on it at night. 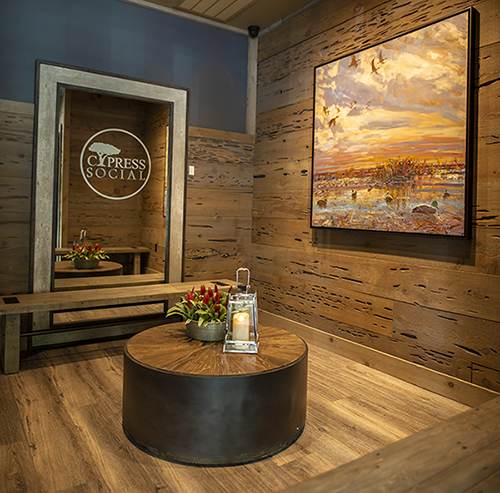 Cypress Social opened to the public on Aug. 18. 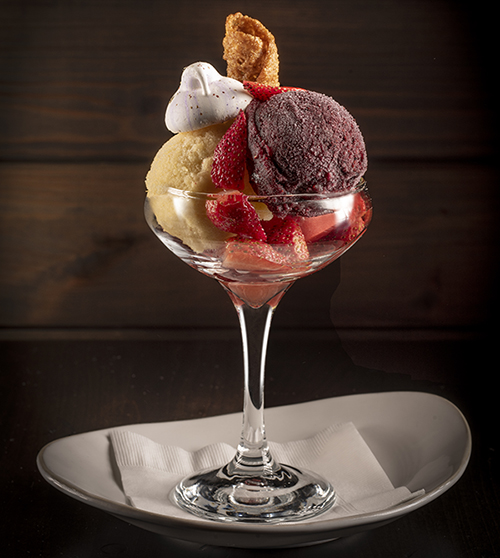