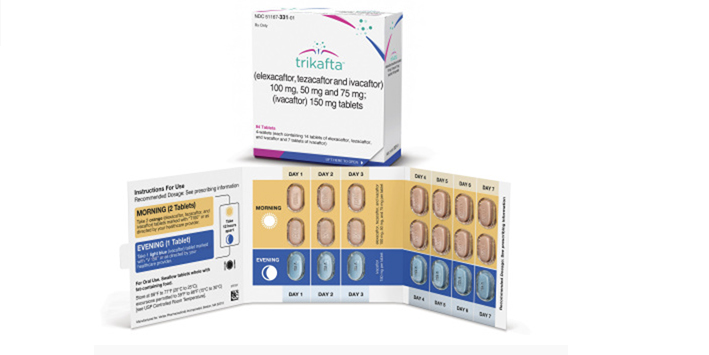 The U.S. Food and Drug Administration has approved a new drug that has the potential to treat the most common form of cystic fibrosis mutation, the F508del mutation.

On Tuesday, Oct. 21, the FDA approved Trikafta, a triple-combination drug that is available for cystic fibrosis patients aged 12 years and older who have have at least one F508del mutation in the cystic fibrosis transmembrane conductance regulator (CFTR) gene. According to the FDA, this demographic represents roughly 90 percent of the total cystic fibrosis population.

Trikafta was fast tracked by the FDA and given a “Priority Review” due to its “benefit to the cystic fibrosis community.” The drug was approved in roughly three months – ahead of its 2020 review goal It has also been designated as an “orphan drug,” a certification encourages the development of treatments for rare drugs.

The drug was developed by Vertex Pharmaceuticals, a biotechnology company based in Boston and London. The list price for the drug is $23,896 for a 28-day pack, or a total of $311,503 for a year’s supply.

“Today marks a milestone for CF patients, their families and Vertex. After a 20-year journey together, we have received FDA approval of Trikafta: a single breakthrough medicine with the potential to treat up to 90% of all people with CF in the future. For approximately 6,000 people with CF in the U.S., Trikaftais the first medicine that can treat the underlying cause of their disease,” Jeffrey Leiden, M.D., Ph.D., Vertex’s Chairman, President and Chief Executive Officer, said in a statement.

More than 30,000 people in the United States and more than 70,000 worldwide have cystic Fibrosis, according to the Cystic Fibrosis Foundation Patient Registry.

Cystic fibrosis is a progressive disease caused by mutations in the cystic fibrosis transmembrane conductance regulator (CFTR) gene, which prevents proteins in the body from moving chloride to the surface of cells. As a result, water is not attracted to the cell surfaces.

The end result is that mucus in the body’s organs becomes thick. This becomes a significant problem, especially in the lungs, where mucus can clog airways and trap bacteria. This can result in respiratory failure, infections and more.

“At the FDA, we’re consistently looking for ways to help speed the development of new therapies for complex diseases, while maintaining our high standards of review. Today’s landmark approval is a testament to these efforts, making a novel treatment available to most cystic fibrosis patients, including adolescents, who previously had no options and giving others in the cystic fibrosis community access to an additional effective therapy,” acting FDA Commissioner Ned Sharpless, M.D.

Two trials using Trikafta have reportedly demonstrated the drug’s effectiveness using patients aged 12 years and up. The first trial, a 24-week double-blind trial with 403 patients, and the second trial, a four-week double-blind trial with 107 patients, revealed that Trikafta had a significant impact on the percent predicted forced expiratory volume in one second, or ppFEV1, an indicator of cystic fibrosis lung disease progression, compared to a placebo.

In addition, the first trial showed that patients who received the drug had improvements in sweat chloride in patients, as well as the number of pulmonary exacerbationsand body mass index, compared to the placebo recipients.

“Today’s approval is a historic moment in cystic fibrosis care, with the potential for more people to benefit from CFTR modulator therapy to treat the basic defect of their disease,” Steven Rowe, M.D., Director, Gregory Fleming James Cystic Fibrosis Research Center, University of Alabama at Birmingham, said. “In clinical trials, Trikafta was generally well tolerated and demonstrated improvements in multiple outcome measures in CF, including improvements in FEV1, improvements in respiratory symptoms and, in the 24-week F/MF study, a reduced rate of pulmonary exacerbations and improvements in BMI.”

The FDA did issue a caution about multiple adverse reactions that can occur when taking Trikafta. Most commonly, individuals taking Trikafta  can experience “headaches, upper respiratory tract infections, abdominal pains, diarrhea, rashes, increased liver enzymes (alanine aminotransferase and aspartate aminotransferase), nasal congestion, increased blood creatine phosphokinase (an enzyme that can be associated with muscle damage), rhinorrhea (mucus in the nasal cavity), rhinitis (swelling of the mucous membrane of the nose), influenza, sinusitis and increased blood bilirubin (may be caused by problems involving the liver, gallbladder or red blood cells).”