Nicole DiMichele is Following Her Passions 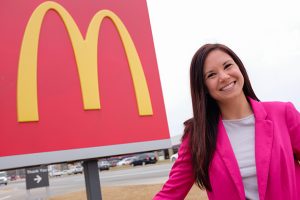 Celebrated annually for over a century, International Women’s Day occurs on March 8. It is a day for remembering the victories achieved by women over the course of history and reinforcing the need for legislative action against gender inequality that still plagues the political and economic world today.

The theme of IWD 2019 is #BalanceForBetter, an acknowledgement of the need for equality on a professional level. This year’s events and campaigns will revolve around advocating for equality in the media, in executive positioning and in payroll, promoting the idea that an economy thrives when equality is present in the world of business.

With so many women in powerful positions in today’s workforce and a record-breaking number of females in Congressional seats this year, it may seem like inequality is a distant concept, but there is still progress to be made. In 2018, the World Economic Forum recorded women working full time in the U.S. as making 80% of what their male counterparts are making.

Though this type of sexism is still present in the workplace, many women are still rising to the occasion.

Illinois native Nicole DiMichele knows what it’s like to be a female in partnership with those at the corporate level of a globally recognized fast food chain, and all disparities aside, she has her sights set on one thing – her people.

Some may think there is nothing special about working a McDonald’s drive-through, but for DiMichele, who spent her teenage years serving cars at the window, it was all part of a bigger plan.

DiMichele grew up in the town of Edwardsville, spending the bulk of her time in the McDonald’s franchised by her father – the place where she developed a love for the business and a passion for “her people”.

She graduated from Southern Illinois University-Edwardsville with a degree in speech communications and soon after, came to Arkansas where she worked toward becoming a McDonald’s Owner/Operator. She told her parents there was no back-up plan.

“This is what I knew I wanted to do [for] my entire life,” DiMichele says.

After spending 4-and-a-half years completing McDonalds’ Next Generation program, she was approved in 2014 to begin opening her own franchise locations. In 2010, while working at the Warden Road location in Sherwood, she was recognized as an Outstanding Restaurant Manager, a competitive award granted to the top 1% of general managers.

Nationally, six out of 10 McDonald’s restaurant managers are women.

Today, DiMichele supervises two North Little Rock locations and one Sherwood location. Along with being in the restaurants, she is on the Board of Directors for the Ronald McDonald House, a charity she is passionate about speaking about and fundraising for.

“We just do everything we can to make sure that [the children] have as much normalcy as possible,” DiMichele says. “It just makes [me] want to work even harder.”

However, hard work and passion can only go so far without support and as a member of the McDonald’s Women Operators Network, DiMichele finds her inspiration in the banding together of the strong and smart female franchisees.Today, nearly 3,500 U.S. McDonald’s restaurants are independently owned and operated by women. WON members strive to uphold the utmost professionalism and business ethics possible, while expanding entrepreneurial opportunities for women.

“We’re setting a great example for young women helping with entrepreneurship and showing that we can be just as good and better than the guys at anything,” DiMichele says.

Everything she does, she does for her people. In fact, her reputation and passion for working with people earned her the title of People Team Lead, a position in which she was chosen to represent her region and work with corporate offices to better the business’ “people practices.”

Three of her employees will be attending in April of this year.

Many young men and women come through her restaurants and become “her people” and DiMichele has the same goal for all of them, believing that if she is to help people become better, she must first make them believe in themselves.

“I want to help make sure that I inspire people to be the best that they can be,” DiMichele says. “I want people to be proud of themselves and take pride in what they do and be happy with what they do.”

DiMichele, loyal to her practice, often refers to herself as a “brand ambassador” for McDonald’s and her pride in particular for defending the business and correcting misconceptions has deep roots.

She laughed as she talked about getting kicked out of a high school class for disputing claims made in a documentary the class was watching called Super Size Me, which is a film examining how McDonald’s contributes to the increasing rate of obesity.

“I had to sit in the hallway,” DiMichele smiles

Her passion for people and her purpose-driven style of leadership led to her recognition, at the age of 27, as one of Arkansas Business’“20 in their 20s” in 2015. She is also a member of both the Sherwood and North Little Rock Chamber of Commerces, and has been involved with the Sherwood Young Professionals, the Sherwood Humane Society, and the 2017 Miss Arkansas Pageant.

Involved, driven and caring, DiMichele has the ability to make businesswomen everywhere proud to be a part of a movement that may be celebrated only once a year, but incites a passion in female hearts that reminds them daily of their purpose, potential and strength to pursue their dreams against all odds.