Across America, food insecurity and hunger are major issues facing vast numbers of U.S. residents. More than 40 million people in the United States were food insecure in 2017. That’s more than 12 percent of the entire population.

Food insecurity is defined as a lack of access to adequate food to live a healthy life for you and the members of your household. In addition, it means that there is a limit or unavailability of nutritious foods.

And this problem is affecting Arkansas. According to Feeding America, approximately 518,960 people – or 1 in 6 among Arkansas’ population – struggle with hunger on a daily basis. Of that total, more than 167,000 are children.

According to Fresh2You director Josh Harris, the idea behind the event is a combination of a desire to feed more people in the Little Rock area and entertain them with activities inspired by “American Ninja Warrior.”

“I have been directing the Fresh2You mobile food pantry for a year now. When I applied to be on NBC’s American Ninja Warrior TV show I shared about what I do and the need here in Little Rock,” Harris says. “After competing on the show this year I felt like Little Rock would love a Ninja event and a fun way to raise money to feed more people.” 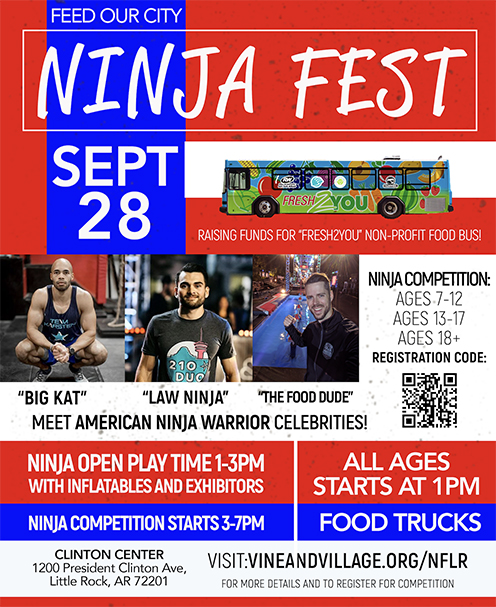 Harris says that Feed America estimates that roughly 20 percent of individuals in Little Rock are food insecure. For both Fresh2You and Ninja Fest, the goal is to provide meal and alleviate the food insecurity problem. “Our mission is to take produce, meat, and dairy into food deserts and other struggling areas of Little Rock to improve their diet and health. I believe no man, woman, or child should ever go hungry and lack access to fruits and vegetables,” he says.

Raising awareness and funds for food insecurity is the main goal, but there’s going to be plenty of fun to be had. True to its name, Ninja Fest will be a celebration of all things “American Ninja Warrior.” During Ninja Fest, several American Ninja Warrior celebrities, including “Big Kat” Kartsen Williams, “The Law Ninja” Brian Burkhart, and “Food Dude” Josh Harris himself will be meeting fans and signing autographs.

There will be open play time from 1-3 pm for ages 4 and up and a Ninja Competition for ages 7 and up. The ninja competition will have medals and prize for all age groups, which range from ages 7-12, ages 13-17 and ages 18 and up.

“Ninja Fest is an event to help raise awareness to the need and an opportunity for people to donate. We want people to come out and have fun and learn about what they can do to make a difference. We call it #feedourcity because all the proceeds we raise from the obstacle course, raffle tickets, food, and ninja competition go to feeding those in need. It’s a festival all about being active and healthy and joining the cause to help those in need. Together we can improve our city one healthy family at a time,” Harris says.

Proceeds from Ninja Fest will be used for buying food for people in the Little Rock region who are food insecure.

“We find ways to source food from gardens, farms, and markets to distribute to those who can’t afford to buy them or are too far away from grocery stores. We serve a lot of disabled and elderly adults who aren’t able to go out to buy food for themselves,” Harris says. These families need our help and they are incredibly grateful for everything we do. It brings hope and positivity in the communities we serve.”