Nominate the Next Class of the Arkansas Business Hall of Fame

It’s time to choose the new members of the Arkansas Business Hall of Fame. The organization is accepting nominations for its 2018 class until July 15, according to a news release.

Seventy-eight businessmen and women currently have spots in the state’s homage to successful people. Previous inductees include executives from companies such as Wal-Mart Stores, Inc.; Tyson Foods, Inc. and Dillard’s, Inc. Up to four new people can be inducted this year, according to the organization’s website. 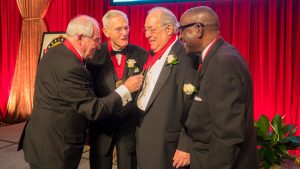 The 2017 class of the Arkansas Business Hall of Fame.

The selecting committee will consider the nominees’ “outstanding leadership in establishing, building or running a business; improving his or her community; and displaying the highest level of ethics,” according to a news release.

Nominees must be Arkansans “by birth or by choice,” according to the hall of fame’s website.

Anyone interested in submitting a name for consideration can fill out a form on the Arkansas Business Hall of Fame website or email the nomination application to abhf@walton.uark.edu.

The hall of fame is associated with the Sam M. Walton College of Business at the University of Arkansas at Fayetteville. Notable members include Sam M. Walton, founder of Wal-Mart and Sam’s Club, as well as Dallas Cowboys owner Jerry Jones and former Arkansas governor Winthrop Rockefeller.