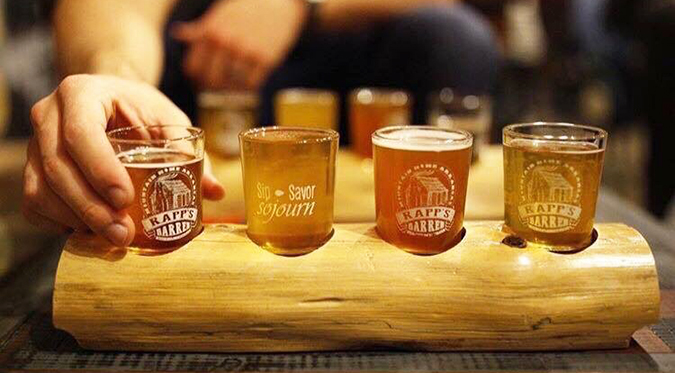 While Fayetteville has attracted beer lovers for years, nano-breweries are now popping up in northern Arkansas.
“We’ve got something of a craft beer center developing in our neck of woods,” says Jason Aamodt, owner and head brewer at Norfork Brewing Company. “On the border at Missouri, you have Wages Brewery, then in Pontiac, there’s Lake Bums Brewery. Come south and you have Rapp’s Barren, then south to Norfork Brewing Co. Back west is Big Flat and Gravity BrewWorks.”
It’s almost the start of an unofficial beer trail, says Tony Guinn, who owns Gravity BrewWorks in Big Flat with her husband Bill Riffle, head brewer. Their nano-brewery was in the first in the region and opened in November, 2013.
“When we were the only ones, it was harder to say come up and sample other beers because there isn’t anything else around,” Guinn says.
Now it’s shaping up to be a beer destination and the brewery owners are talking about forming an official beer trail and envision something similar to Fayetteville/Bentonville area where customers get a passport and have it stamped at each brewery.
This is in the early stages, they stressed, but believe it will happen.

In the last 15 months, Baxter County welcomed two new breweries: Rapp’s Barren in Mountain Home opened in September 2017 and Norfork Brewing Company debuted in June 2018.
The two businesses have been so well received that they have already expanded or are poised to expand in 2019.
RELATED: Arkansas’ Buzzing Beer Scene
Since opening, Rapp’s Barren went from a one-barrel system to four-barrel capacity.
“Business is still growing, and we are as busy as we were when we opened, it’s phenomenal” says Russel Tucker, who owns the business with his friend Chris Gordon.
“We are hoping in 2019 will be some minimal distribution to restaurants.  We have our first fulltime brewer coming on in 2019 which is pretty exciting for a couple of guys who are worn out from working two jobs last year.”
Norfork Brewing Co., is upgrading this winter and will go from a one-barrel system to seven or 10 barrel capacity.
Regardless of the size of the towns/city, the breweries are attracting big crowds.
“We are tiny little town, we don’t even qualify for small,” says Aamodt. “I think there are a lot of people in Norfork and Big Flat that come out for tourism, for fishing and caverns. Even though we are miniscule, we have a pretty big population of people that comes to our place which is why a beer trail is perfect because what better thing to do than catch fish and have a local beer.”

Guinn echoed the same sentiment saying she’s surrounded by tourist attractions: rivers, forests, and Blanchard Springs Caverns.
Guinn’s husband brewed for 10 years at Vino’s Brewpub in Little Rock. When they decided to launch their own business, they approached townspeople in Big Flat to see how they would feel about a brewery opening in town, and officials were welcoming.
“What’s neat is even the folks who don’t drink will send folks up here,” she says.
For those who do not consume alcohol, Tucker says he feels like they are changing people’s perception of a brewpub because it’s not a bar – it’s a communal gathering place.
While Rapp’s Barren- so named because that was original name of Mountain Home in 1810, has its share of tourists, the locals really keep it afloat.

“There are no other breweries in this area and for us Mountain Home has a large population of retirees and so many are transplants from up north and are used to having a pub on the corner to hang out. That has been a large part of our success,” says Tucker.
RELATED: Near Beer